Just as I was mourning the last of the Warder books, here is a warm and lovely Christmas story about Malic and Dylan. I will admit to a certain affection for this couple. Malic was a older hearth; a loner of few words and fewer friends until he found his Hearth in the person of Dylan Shaw. Dylan is young, adorable, loyal and totally in love with his Warder. Now its their first Christmas together as a couple and Dylan has brought Malic home to meet the family.

The opening chapter with its “Christmas with the Kranks” description of the Shaw house will have you snickering. This is deceiving as the Shaw’s Christmas cheer does not extend to Malic who they believe is too old for their son. Soon the house is full of holiday discord which Malic takes to heart and hearth, as it were. Soon Malic is beginning to doubt his relationship and Dylan. If you love this couple as I do, this is heartbreaking. Mary Calmes never lets you forget that the Shaws also think they are doing what is best for their son because Malic wants what is best for Dylan too. You will be frustrated and want to grind your teeth along with Malic as he confronts a family aligned against him. And you believe Dylan’s youthfulness as he gets involved with seeing old friends also home for the holidays. It will take a demon, a trap and a forgetfulness spell to spell out the truth to Malic about his Hearth.

Its wonderful, warm, and you get to see some of the other Warders as well which is always a bonus for me. But was this the end of the Warders? Hmmmmm.

While I was alternately cheering the couple on or lining people mentally up for stooge slaps, I also noticed that the author was leaving small hints that the series was not at end after all. Warders powers were ramping up…something was going on. So I posed the question to the author. Mary Calmes came back with a yes (but other sequels have to be finished first). So Merry Christmas and Happy New Year to all the fans of the Warders and their Hearths. It looks like we might be seeing them all again. 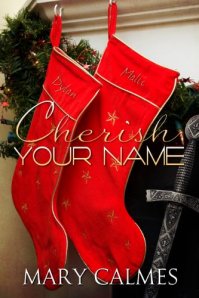 From Dreamspinner Press: “Malic Sunden is in hell—only not literally… yet. As a warder, Malic is used to fighting demons and squaring off against all kinds of creatures from the pit, but this year he’s facing a new and terrifying prospect: Christmas holidays with his much-younger boyfriend and his family.

He loves Dylan, his hearth, but Dylan’s parents, the Shaws, are another story. They think Malic is a cradle-robber, among other things. At least their neighbor, Brad, seems to like him. Then again, maybe not. When Malic gets offered to a demon who wipes his memory of everything but Dylan’s name, it will take all Malic has to escape his new life in a hell dimension and return to the man he calls home.”