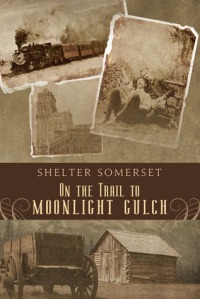 It’s 1886 and Chicago, Illinois is booming.  Everywhere there is construction as new steel structure buildings rise up and more people flood into town for jobs.  Torsten Pilkvist, known as Tory, works for his Swedish immigrant parents in their bakery and boarding home.  Tory and a new boarder, Joseph fall secretly in love only to see it end with a tragic accident.  As Tory works through his grief, he happens upon Matrimonial News, a periodical where men and women advertised for arranged marriages.  One letter in particular calls out to him, that of Civil War Veteran Franklin Ausmus who lives in the Black Hills in Dakota Territory.  Tory decides to write  Franklin back, hiding the fact that he is male and the two men begin a correspondence that quickly becomes important to the both.  When Tory parents discover the letters, the ensuing argument sees Tory fleeing Chicago and heading out to meet the man behind the missives.

Franklin Ausmus left the Civil War behind when he journeyed out West.  Traveling until he happened upon the perfect place to build a ranch and settle down, a homestead called Moonlight Gulch.  And for ten years, he worked the land with only Wicasha, a Lakota Sioux as friend and company. Driven by loneliness, Franklin writes a letter to the Matrimonial News with low expectations.  He is surprised when the letter from a girl called Torsten P calls to him and he writes back immediately. Soon letters are flowing as quickly as the mail of the times will allow and a tenuous relationship is established between the frontiersman and the young Swedish “girl”  in Chicago.  But the letters abruptly stop leaving Franklin brokenhearted and unaware that the real Torsten P. is about to arrive on his doorstep.  What will happen when Franklin discovers the young greenhorn he hired and become fast friends with is in fact the Torsten P. he wrote all those letters to.  And it’s not just Franklin’s anger and Tory’s subterfuge that must be overcome, someone is trying to steal Franklin’s lands.With so much at stake, will both men survive long enough to get their chance at love?

This book contains many wonderful elements, the main one being the author’s ability to capture the hustle and bustle of Chicago 1886 so authentically that I could feel the awe of the citizenry as Chicago rises from the ashes of the Great Fire of 1871 to become one of the largest  cities in the nation.  Somerset’s descriptions of the new metropolis include buildings soon to be known as skyscrapers rising up as thousands of immigrants flood into the city looking for jobs and opportunities.  There are crowded sidewalks, boarding rooms appearing overnight to fill the need  for lodging, dueling cathedral construction and always more people pushing the population to over 1 million, exceeding that of Brooklyn and Philadelphia.  What amazing times to have lived in.  The author captures it perfectly, the research so well done that it meshes nicely with the story without becoming a information dump.  Shelter Somerset has an equally lovely touch with the portrait of Torsten’s parents, the stolidly Swedish Pilkvists and their boarding room guests.  Arriving in America with their hard work ethic and determination to exceed, their son’s flighty nature and “head in the clouds” attitude is neither accepted nor understood.  It is absolutely realistic that such parents would do anything,including burning letters, to  ensure that their son continues on the path they have chosen for him.  The author’s characterizations just add to the flavor and tone of the Chicago setting.  In fact, it is one of my favorite things about this novel.

And while I missed Chicago as the story migrated west, Somerset’s descriptive gifts kept up with the journey as Tory travels by various methods to the Black Hills.  Especially memorable are the stage coach portions of the trip with the carcasses of horses, stagecoach remnants and harnesses lining the trail they travel on, a testament to the treacherous nature of the  passage west.  There are nice touches of Tory’s interludes with “renters” or prostitutes and with other men who prefer “the company of men”.  In many ways, I wish the relationship aspect of the story to have been reduced in importance and the journey itself elevated as the main storyline.

It is with the majority of the main characters that the problems with the story arise for me.  Franklin Ausmus is a wonderful creation.  A wounded veteran, disabled by the Civil War, he has fought hard for his land and to get Moonlight Gulch to the stage where he is happy with his home, barns, gardens and animals.  He is self sufficient and  has a friend in Wicasha, a Lakota Sioux who lives on his land.  The book is at its strongest when it is Franklin’s voice we are listening to.  His love for the land and his travails as a soldier in the Civil War make him easily the best realized character in the book.

Less successful is Tory Pilkvist, a young Swede small in stature and incredibly impulsive by nature.  I found it hard to believe that he had not been robbed or shot at by the time he got to Spiketrout, the town nearest Franklin’s homestead.  At times, I wanted to shoot him myself his naivete was that irritating.  And then the author goes and shoots  their own character in the foot  by having Tory simper.  You heard that right.  Simper. As in “an affectedly coquettish, coy, or ingratiating smile or gesture”, that simper.  I haven’t heard that phrase outside of Cinderella’s stepsisters so it stopped me completely here to see it  in a main character.  We are supposed to find that romantic I think but the context in which that would be attractive totally escapes me.  And it happens more than once.  Sigh. That Tory simpers and it is in keeping with his character tells one all you need to know. Tory never reached the realistic heights achieved by Franklin and the Pilkvists.  Neither does Wicasha, the Lakota who seems to have gone to bed with quite a few men in the Territory.  His character often felt more a means to introduce the research about the third gender  in some Indian tribes than a necessity to round out the storyline and move the narrative forward. And then there is Henri Thibault Bilodeaux, the Snidely Whiplash of the novel.  He pops up every 10 minutes or so, threatens our heros and tells them he is going to steal their land.  He orchestrates every dramatic scene with all the villainous flair of a sneering Yosemite Sam.  I could never take him all that seriously which negated any angst or anxiety he was supposed to trigger with his appearances.

Finally, my last quibble has to do with the sheer length of this book.  It is way too long so by the last sentence you feel like you have slogged through the  tall grass prairies and mountain paths to get to the end, weary and needing to find the nearest saloon.  See? The long way of saying that at 42 chapters, it  felt overblown and unwieldy.  At least a third could have been trimmed and perhaps even more to arrive at a faster paced story where the slight characterizations might not have been as noticeable.

To recap, there are some great elements here, the descriptions of the locations, the great feeling the author has for the times and one terrific main character.  The author has such an authentic feel for settings that I wish we could have lingered in Chicago so vividly did the  city come to life. This was also a nice twist on the mail order matrimony storyline. I just wish it had come in a smaller bundle, complete with better companions and love interest .

Cover art by Anne Cain.  What an outstanding cover.  Perfectly captures the times and place of the story.  Absolutely a favorite cover of the month for me.