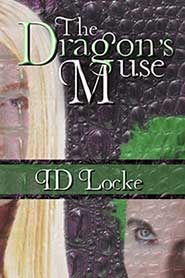 A young half dragon half human has trained all his life to be a Guardian to a Muse, a spirit or god that provides the inspiration for an artist. When he is called by The Ring, a group of elders who choose the Guardians, and given a Muse to guard, he is surprised to be chosen, not only because of his young age but also because he is half dragon. Then The Ring informs him that the Muse rejected their last choice and has been without a Guardian since. And with that The Ring sends him off to meet his Muse.

Misu is a half Muse as he is half human half god.  He is also unique in that all the other Muses are women and he is a hermaphrodite. And   while all the other muses can inspire many, Misu is a Muse to only one artist at a time.  The last dragon The Ring sent him was totally unacceptable for a muse who uses their sexuality to conjure up the inspiration necessary for a muse of erotic poetry.  That dragon only saw sex as something for breeding, not as a joyful, fun act, so Misu sent him packing.  Then a new Guardian appears, a half dragon/half man that Misu has seen in his dreams for hundreds of years and Misu names him Gunari as is the custom.  Gunari is startled to find out about Misu’s physiology but Gunari is so attracted to the Muse that it makes no difference whether Misu is male or female as Gunari has always been attracted to both, something he chalks up to the human part of his heritage.  Both are so pleased with the partnership that it’s not long before they find sexual attraction deepening into something more.  As they explore their sexual natures, from BDSM to gentle loving sex, Misu realizes he loves Gunari. Now if only Gunari can recognize that he feels the same.

Misu just is Misu and completely content to be a hermaphrodite.  Misu loves sex in every way, in every combination and so feels that being a hermaphrodite is sort of double the fun. Happily for both, Gunari feels much the same.  Gunari loves Misu’s duality and take full advantage of every orifice possible as often as possible, and if studded paddles or restraints come into play, even better. Early on, Misu recognizes that it is Gunari’s face that has haunted their dreams for centeries and Fate is playing a part in bringing them together.  As Misu has had time to fall in love, it is new for Gunari to consider the idea. Locke does a wonderful job with the characterizations here.  Misu is such a gloriously happy sexual being and Gunari is a wonderful young half dragon who takes their responsibility seriously as a Guardian but also comes to love their Muse as well. There are such lovely touches here from the descriptions of Misu’s cottage and the field of flowers nearby full of butterflies to chase and sunlight to bask in.

And yes, there is lots of sex, hot sex, happy sex, bondage sex and penetration of every opening possible and every combination, male and female in detail.  Throw in some glowing auras and you have two very happy beings in a short story of love, sexuality and acceptance, no matter the gender.  If that sounds like something you would like to read about, then this book is for you.

Cover:  Alessio Brio was the cover artist and I find it just as unusual as the story.  The black background is textured to look like dragon hide, I think with Miso and Gunari (green hair) foremost in the design.