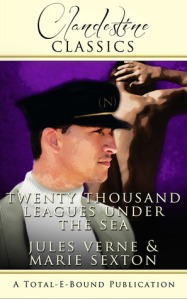 The year is 1866, and Naturalist Dr. Pierre Arronax and his manservant Conseil board the Abraham Lincoln, a vessel whose purpose is to track down and destroy the marine monster terrorizing the oceans.  This unknown monster threatens international shipping and has sunk the ships of many nations so it is imperative that it be stopped at all costs. The nations have come together to fund the mission and now the Abraham Lincoln holds the best sailors to do the job.  But from sea to sea, after visiting multiple locations where the monster has been sited, the ship turns up nothing, boredom besets the crew and the Professor’s interests turn to Ned Land, a sexy harpooner who returns Arronax’s interest.

As the Professor and Ned engage in a tempestous affair, the Captain of the Abraham Lincoln makes one last attempt to locate the monster and succeeds beyond its wildest goals.  The mighty sea monster is sighted and the Abraham Lincoln attacks, only to be attacked by the thing in turn.  During the proceedings, Dr. Arronax is thrown overboard, followed by Conseil, and then Ned Land.  The men find themselves rescued and then imprisoned upon The Nautilus, as their “sea monster” turns out to be a submergible vessel captained by the enigmatic and dangerous Captain Nemo. As the days aboard the secret submarine turn into months, the Professor and Conseil spend their days mesmerized by the new worlds they see under the sea and the Professor and Ned spend their nights investigating their sexual pleasures.  But Ned feels that he cannot live his life forever  imprisoned and the Professor must choose trying to escape with his lover or a life spent in scientific discovery on board the Nautilus.

With Twenty Thousand Leagues Under the Sea, Marie Sexton merges the classic Jules Verne novel with m/m fiction to a remarkably successful degree.  Jules Verne published his popular science fiction story in 1870 and his saga of the mysterious Captain Nemo, the submarine Nautilus and its narrator Professor Pierre Arronax became a instant  classic that continues to this day.  A layered, complex tale of scientific discoveries, amazing undersea journeys and futuristic assumptions also included the basest of human emotions such as anger, hatred and the need for revenge.  Jules Verne was ahead of his time in predicting the military use of high speed submarines.  Also forward thinking was his use of “oppressive peoples” in his story,  that Captain Nemo was so voluble in his heated arguments and discussions about the oppressors and the oppressed which is how Nemo and his crew regarded themselves was a rarity.  The original book included authentic scientific lists of flora and fauna to go with the animals seen during their voyages.  As Marie Sexton states “several places where extended monologues or lists of plant and/or animal species have been deleted from the story.”  In their place, the author establishes a romance between Professor Pierre Arronax and Ned Land, the definitely did not exist in the Jules Verne story.

I throughly enjoyed the author’s addition to this classic tale.  I loved Arronax’s love for his Ned Land.  Their sexual exploration of each other is carried out in a realistic manner, as fear of exposure to those around them would have resulted in death.  Ned’s small cabin aboard the Abraham Lincoln allows only the smallest of sexual play and their assignations are kept to the minimum which is also authentic.  But once the men have been taken onto the Nautilus, things change between them as the rules and law of Captain Nemo are very different from the nations above them. Sexton does a lovely job of mixing historical reality with Jules Verne science fiction story.  She also gives us a sexual relationship that includes a slight Bdsm bent between Pierre and Ned as their larger cabin on the Nautilus allows them greater physical freedom in their bed.  Ned is a lovely  character given the genuine feel of a man who lives his life outside, his love of the thrill of the hunt is present in all of his actions. So when Ned’s adrenaline based life style is curtailed when he is imprisoned, however nicely, on the Nautilus, we can understand his frustration at his inaction and his anger at Nemo and crew.  Pierre Arronax, again the narrator, and his manservant Conseil, are also beautifully portrayed as the excited scientists they are as each new discovery propels them into frissons of delight and wonder during the day and Pierre experiences the joys of submission at night.  Again, I just loved Marie Sexton’s romance enhanced version of Twenty Thousand Leagues Under the Sea.

I will admit that my father gave me my first copy of this story back in grade school.  He passed on his own copy that he had gotten when he was young along with Robert Louis Stevenson’s Treasure Island.  I was mesmerized by the many descriptions of new places and animals I had never seen.  I couldn’t get enough of the forests of kelp or the schools of marine life I had never seen or heard of. There were so many unknown animals that I had to go look up, so many places I need to find on my globe that I often felt like a voyager along with Arronax and Nemo.  But as with the original, the lush multitude of descriptions, the veritable endless lists of scientific nomenclature had me flipping past pages then as it  did now.   There is a reason that many a student turns to Cliff Notes instead of wading through the original novel, and this version suffers from the same problem.  It is simply too long.  In trying to remain faithful, it too is as long as the original version.  Jules Verne’s came in at 352 pages (approximately depending upon font size), Marie Sexton’s at 390.  And as a Naturalist as much as I love revisting the scientific terminology for various species of flora and fauna, a little of it goes a long way.  And while I delighted in the sumptuous portraits of the wonders found under the sea, after a while it became just too many to digest, too rich a banquet as it were.  For me, I had to read it over a stretch of time, pace myself so I had time to look up the places the Nautilus went and the things they saw.  And once read, I never picked it up again however much I enjoyed it.

So here’s my quibble with this Clandestine Classic, it is too true to the original.  It is very enjoyable and I give high marks to Marie Sexton for her romantic inclusion as well as the manner in which she honored the original.  That said, it is a lot to wade through.  I don’t have problems with people playing with the classics, it’s done all the time.  So if you loved the original and you love m/m romance, pick this up and prepare to enter back into Jules Verne’s universe with a twist.  If you found the original daunting,  perhaps you will give this a try in stages.  It is worth it no matter how long you take to travel 20,000 leagues under the sea with Professor Pierre Arronax, Conseil, Ned Land and Captain Nemo.

Posh Gosh over was interesting but I wish it had been more of a play on the original.