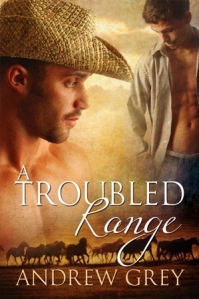 Haven Jessup has never understood the hatred between his father, Kent Jessup and Jefferson Holden who owns the ranch next to theirs.  The feud between the two men has been there all his life, but his father’s hatred for the Holdens has never been his.  One day as Haven is out checking his fences, a huge storm comes up and Dakota Holden is there to save his life and take him home to the  Holden ranch to dry off.  Once there, Haven meets Dakota’s partner Wally and Phillip Reardon, a friend of Dakota’s in for a visit.  Haven is afraid to admit even to himself that he likes men, he knows what his father’s reaction would be but inside the Holden ranch, Haven sees men in love with each other and not afraid to show it and for the first time, Haven starts to question the manner in which he lives his life.

Phillip Reardon has come to see his friends after being fired from his job in the city.  Phillip has never wanted to settle down romantically before but as he watches Dakota and Wally interact, he realizes that he wants that type of relationship for himself but where to find the man to spend the rest of his life with?  Phillip recognizes the inner turmoil he sees inside the shy, young rancher and works to help Haven accept himself.  As both men move forward into a new and hidden relationship, trouble arrives on the Holden ranch in terms of cut fences, rustled cattle, as somewhere someone with a secret agenda is threatening the Holden ranch and the safety of all who live on it.  How can a new relationship withstand the strain and stress of all the recent events and the knowledge that one day soon Phillip is going to leave to return to the city and Haven will be on his own once more?

The Range series continues to be a favorite series of mine by Andrew Grey, author of a number of wonderful series on a variety of subjects.  A Troubled Range continues the story started in A Shared Range, that of the men of the Holden ranch from father Jefferson Holden and his son, Dakota to the men who arrive there and find their little heaven on earth.  A Troubled Range brings the neighboring Jessup ranch into the story, as part of that family has been engaged with a feud with  Jefferson Holden for most of their lives.  Neither man will reveal the cause of the hatred they bear for each other to their sons but it impacts all around them.

The two families could not be more different, especially when it comes to the treatment of their  sons.  Jefferson Holden loves his son and accepts his son’s homosexuality with ease, welcoming his son’s partner into the family without hesitation.  Haven, on the other hand, cannot remember if his father has ever held him or told him that he loves him.  In fact, Haven has been treated more like a farm worker by his father than a son all of his life.  Andrew Grey is terrific at exposing a family’s discord and its effects upon the innocents caught in its path.  Kent Jessup is a hard man who has retreated from the physical work needed to be done while still managing to punish and hound his son about his disappointments in Haven on every aspect of his being.  We feel for Haven immediately as he continues to do his best for the ranch he loves,and  deal with his abusive father.  Then you add onto that emotional load the fact that Haven is gay and conflicted about his sexuality, and your heart goes out to the boy who doesn’t break but find the courage to reach out for more in life.

Phillip Reardon is the exact opposite of Haven.  He is a self assured city boy who has never settled down with one man nor had the  desire to do so. Then the loss of his job shakes up his complacency and makes him take a hard look at the lonely future ahead of him if he doesn’t change his ways.  Phillip likes Haven and is attracted to the young man with all the problems.  At first, Phillip just wants to help Haven as a friend as Haven works to accept his sexuality and then attraction deepens into something more.  But Phillip has to sort out his own internal baggage before he can make room for another in his heart.  Grey makes sure that all his characters reflect on their true natures and we get to watch as they sort themselves out.  It’s realistic, it’s emotional and it brings us so much closer to these wonderful characters and makes us understand who they really are.  Andrew Grey knows how to  deepen our connections to his characters and their stories and does so with a maestro’s touch.

A Troubled Range brings us storms on the prairie, heartbreaking moments of both pain and joy and ending with the deep satisifaction of two men finding true love at the end of the road.  As the characters are drawn from life, we see betrayal and loss that cuts to the core amidst the dynamics of two opposing western families.  What an amazing series that can bring together so many intense conflations, of battlefields both internal and physical and still manage to make them all fresh in each book of the series. Don’t pass any of these books by.

Cover art by Catt Ford, who continues to do a wonderful job with branding the series.

Here are the series in the order they were written and should be read: