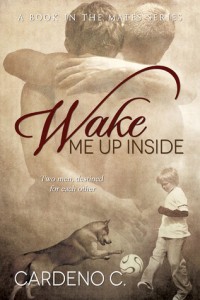 Zev Hassick has always been attracted to Jonah Marvel from his first memory of the man. They were children and Jonah was a toddler playing in his backyard.   It was Zev’s first shifter change and his travels brought him near the Marvel home.  But it was toddler  Jonah that brought him closer and the child too sensed the connection, coming over to play with the wolf pup.  From then on, they were inseparable as time and again, Zev worked to attend the same schools as Jonah, pursuing a relationship with the human that was frowned upon in the shifter world.

Then Jonah goes away to college to pursue his dream of becoming a doctor, putting a strain not only on their relationship but on Zev as a shifter in need of his mate.  As the son of the Alpha, Zev was expected to find a female shifter and mate, not only to produced progeny but to remain healthy.  But Zev has never been attracted to anyone but Jonah and it wasn’t until high school that he realized that it wasn’t just a deep friendship he had with Jonah but a mate bond.  But Jonah’s humanity and college goals stopped Zev from claiming him, also from even telling Jonah that he was a shifter.

Now Jonah is about to graduate from college and its time for all the secrets to come out.  But Jonah isn’t well.  He feels like he is losing his mind.  And his father’s behavior is unsettling.  Not all the secrets belong to Zev.  Will Zev and Jonah’s relationship be able to withstand the tumultuous events on the horizon or will the secrets of the past tear them apart?

Wake Me Up Inside is the first book in the Mate series from Cardeno C and I can’t wait for more.  Cardeno C has a straightforward narrative that delivers the story in a manner that makes it easy for the reader to follow the timeline of Jonah and Zev’s relationship as it grows from childhood to adult.  There are just enough flashbacks to explain their history without it overwhelming the story. I  found the  flashback to Jonah and Zev as toddlers especially endearing.  Take a good long look at that marvelous cover and it gives you an accurate picture of a scene in the book.  Boy and wolf pup and Jonah and Zev, always together no matter the form Zev is in.  How does that idea not draw you in?

It is the characterizations that make or break a story for me and in Zev and Jonah we get two characters to connect with immediately.  Zev is wonderful as a shifter with huge expectations placed on his shoulder by his father and pack at an early age,  The author lets us watch as Zev shoulders these responsibilities with ingenuity and grace as he ages.  He accepts his role as future Alpha and then makes it his own.  Zev is just a lovely creation and he was easy to relate to. So was his mate, Jonah who had plenty of problems of his own.  His father was full of secrets and extremely overprotective.  But his ease at accepting his sexuality and his own depths of compassion and responsibility made him a perfect match for Zev and the reader.

I liked the concept of the shifter society as one held back by its own traditions and isolation.  I just wished it had been explored a little more throughly.  We get bits and pieces of shifter law and lore but establishing a firmer back story for the Pack governing structure would have helped at the end of the story when all sorts of leaders and governing agents appear at of  nowhere.  The same lack of back story popped up again towards the end when an unexpected pair bonding becomes an essential part of Zen and Jonah’s story.  It is not much of a spoiler to tell you one is a vampire and until that is revealed I had no idea that vampires were part of this universe.  I wish that had been folded into the story earlier on so its appearance would have been less startling and made more sense.

My few quibbles aside, this is a terrific addition to the current wolf shifter fiction available.  I hope that each new story will give us more information about the Mate universe Cardeno C is creating.  I anticipate that Zev and Jonah will make a reappearance and a certain couple gets their story told.

Cover art by Reese Dante.  This was a Best Cover of 2012.  Just look at the pictures, the composition and its relation to the story within….all perfection.  I never tire of looking at it.