When I finished All Lessons Learned I found question after question popping into my mind for the author of this remarkable series. Primarily,

what happens next?  Or is there a next for our beloved Jonty and Orlando?  Over the course of the series, I feel like I have walked the paths of Cambridge, gone punting on the river, watched honey buzzards in the sky and ridden the marvelous Flip-Flap ride during the Franc0-British Exhibition in the White City.  All that was all due to Charlie Cochrane’s ability to bring us right into her story as though we were physically there ourselves.

So I scribbled off some questions about the series and here are her replies.  One more thing mentioned in a comment previously is that she is thinking about writing a 10th book to finish the series off completely.  So here we go:

Scattered Thoughts:  What pushed you forward to right one more book after All Lessons Learned (not that I am complaining)? After the epilogue which I found to be bittersweet for the couple, what prompted more in the series?

Charlie Cochrane:  “Two things. Fans asking when another book would come out and Jonty and Orlando whisering in my ear saying “write me, write me”. It always feels like coming home when I’m back with them. (If that makes any sense.)

Scattered Thoughts: And I say bittersweet because of the time frame. They had stayed hidden for so long and change is in the air just not soon enough.###

Charlie Cochrane: “I know. Ironic, isn’t it? Mind you, Orlando wouldn’t like the modern day so maybe it’s as well. Can you imagine Jonty dragging him to Provincetown?”

Scattered Thoughts: Do you have a favorite book of the series? And if so, why?###

Charlie Cochrane:  “Maybe Lessons in Trust because of the White City. I had books about it and an original programme from the Anglo French exhibition which was constantly at my side when I wrote it. Also Lessons in Power because it deals with poor Jonty’s past. And has rugby in it.”

Scattered Thoughts: And do you have a prompt, either a historic artifact or location that you build your books around when you are getting started?###

Charlie Cochrane: “Usually a location, so Jersey, or Pegwell Bay or Bath or – in the case of the one I’m writing at present – a thinly disguised Cliveden house.”

Scattered Thoughts: I have to ask because I know I am thinking it so others are too. Any chance of “lost cases from the Cambridge Fellows mysteries” popping up? Stories out of sequence from the books already published. You know we just hate to let Jonty and Orlando go.

Charlie Cochrane: ” I think it’s entirely possible that lost cases will pop up. I have one buzzing at the back of my mind. Also lost scenes/snippets. I want to post something for Mothering Sunday, maybe a letter from Mrs. Stewart to Jonty when he was young. Still getting my thoughts together on that.”

Scattered Thoughts: And do you have any new series in mind for the future?

Charlie Cochrane: “New series? Maybe. I’ve just completed a contemporary cosy mystery (think Midsomer Murders but with a gay detective) and will be trying to find the right home for it. If it succeeds, I could see me writing more.”

Scattered Thoughts:  I love a good cosy and can’t wait for this one.  Thank you so much for such a wonderful series and taking time to answer my questions.

To learn more about Charlie Cochrane, her books and stories, visit her website and blog listed below.

You can find many free stories by Charlie Cochrane at Charlie’s Free Fiction group.  Or visit her website

Her last release, Promises Made Under Fire, Carina Press February 2013, is also available from Amazon and All Romance. 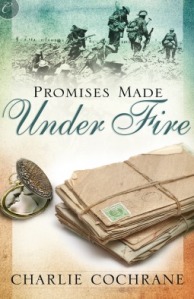 3 thoughts on “A Cambridge Fellows Q & A with Charlie Cochrane”