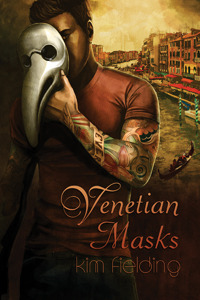 Jeff Dawkins is 30 years old.  His partner just left him for an older, richer man and now he has to sell his house because he can no longer afford the mortgage.  And on top of it all, he has been left with a prepaid, non refundable month long Grand Tour vacation package they planned to take together and that Jeff never wanted to do in the first place.  So when his  mother, the real estate agent. explained that the least painful way to show and sell his house was if he was away, Jeff grudgingly agreed to go on the vacation as planned and leave everything in her hands.

Jeff has never travelled outside of Sacramento, unless you count one trip to Canada as a kid with his parents.  But prepared as always, he has his Kindle, laptop, travel guide and plans well in hand, hoping to make the best of a bad situation.  Then he arrives in Venice and all his carefully laid out schedule flies out the window when he meets ex pat Cleve Prieto.  Cleve is handsome, tattooed and familiar with the language and city.  So when Cleve offers to be his tour guide, for a price of course, Cleve is both suspicious and intrigued enough to say yes.  But nothing about Cleve is what he says it is, his story about his background is constantly changing and he appears to have no visible means of support. Still even with all the lies and misleadings, something about Cleve just pulls at Jeff’s heart, drawing him in just as the City of Venice does, making him fall in love twice over.

Then Cleve’s dark past arrives in Venice looking for him and Jeff must decide whether to hold onto his precious control and safe life or throw all caution away to pursue a love he never expected to find across a continent where nothing is familiar or safe, starting with the languages. Venetians like to hide behind masks and Jeff must discover what is under Cleve’s before it is too late for both of them.

What an amazing, lush journey Kim Fielding sets the reader on in Venetian Masks.  Everything is here, a sumptuous banquet of travelogue, mystery, self discovery and of course, love.  It doesn’t hurt that Fielding sets her story in the city of love, Venice, Italy, a place it appears she is familiar with and loves with a fervor equal to that of a Venetian themself.  The city is described in vivid, knowledgeable, and affectionate terms, from the well known Piazza San Marco (St. Mark’s Square)  to the less familiar island of “Isola di San Michele” where the main cemetery of Venice is located.  We tour the canals via gondola or by the water bus known as vaporetto, and always we feel as thought we are sitting next to Jeff and Cleve instead of reading a tourist pamphlet on local sightseeing trips.  I have been to Venice and still Kim Fielding made me see it again through Jeff’s eyes as it works its magic once more on those who visit her.  I thought this section of the book perfection.  Because it takes time for Jeff to fall in love with the city, so caught up in his breakup and preparedness that it takes a while before he starts to let go and enjoy himself.   And I loved it as we are there every step of the way.  Every day as Jeff starts out from his timeshare, the desk clerk, Mita, asks him if he has fallen in love with her city yet, and with each new day we listen in as the answer evolves.  This is how it starts

Jeff shakes his head. “Well, she’s pretty cute, but I’m not sure if she’s my type.” Mita laughed. “You will see. My city is special and she will claim your heart.”

And you just know it will.  You will too.

Into this amazing city, Kim Fielding creates two totally human and endearing characters, Jeff Dawkins and Cleve Prieto for her story of love and self discovery.  We meet Jeff at a crossroads in his life, a life that has not been easy by any standards.  He has lost his partner of 6 years, he is losing the house he loves because with his partner’s income gone, he can’t afford the mortgage and this trip is pulling him out of his comfort zone of his hometown of Sacramento, California.  He is also 30, a crossroads age as well.  He likes his life safe and he likes being prepared for any contingency and now Jeff feels like that is gone.  Furthermore he is forced to go on a trip he never wanted because it is prepaid and his mother needs him gone to sell his house.    Here is a man adrift in every aspect of his life while still trying to assert some measure of control.  How can you not love him?  Jeff is human, complex, and recognizable in his flaws.

Then he meets Cleve Prieto, his opposite in life.  Like Jeff, the reader isn’t sure what to make of Cleve at the beginning.  His personality is all shadow and smoke.  But soon flashes of uncertainly and pain show through his smooth, casual demeanor, and we are trapped along with Jeff. We are unable to look away from this charismatic man, who might be a liar and thief who still manages to be the love of your life.   Fielding did an outstanding job when she created the dichotomy that is Cleve Prieto.  We understand immediately why Jeff cannot let him go, no matter what his actions say about him.  Cleve is the one person who can make Jeff leave his carefully built zone of safety to reach for something more, and we get that immediately.

I think the plot here is thrilling and actually realistic and when the angst and adrenaline kicks in, it does so with a punch right to the gut as Jeff races across Europe with only a vague destination to go along with the goal in mind.  Just sensational.  And yet here is where my only quibble also makes an appearance.  As Jeff arrives in Zagreb, he is on a mission and knows  his time is running out, yet Fielding cannot let go of her inner travel agent.  Too much time is spent on describing the gray edifices of Zagreb, bland communist buildings everywhere, local food and cafes, even the facial expressions of the denizens as they go about their everyday business.  Jeff is too consumed to have noticed all that, intent on his goal and for the reader it just interrupts the flow of the story unnecessarily where the descriptions of Venice enhanced it.  Had the descriptive portions of this section of the book been parred down, then this would have the 5 star rating this story deserves.

Kim Fielding is an author I only recently discovered and she went immediately into the “must read” column because her books are so well written and enjoyable.  Venetian Masks is a wonder of a book and I cannot recommend it enough.  The same  goes for its creator.  Make note of both and go get this book.  You’ll be thanking me even while spending more money to grab up everything else she has written.  But start here and prepare to fall in love with Jeff and Cleve and of course, Venice, the City of Love.

Cover Art by Shobana Appavu.  This cover is as gorgeous and sumptuous as the story within.  One of the best covers of the month and probably of the year.