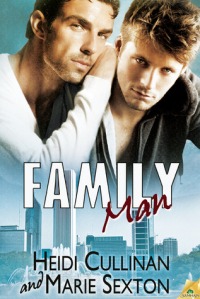 Vince Fierro is forty.  He comes from a large Italian family who love him and can’t understand why he hasn’t found the right girl yet.  After all, Vince has three failed marriages behind him to prove that he is trying. But inside Vince knows the real reason none of his marriages have worked is because he is gay, a fact he has a hard time acknowledging even to himself.  When his sister suggests that Vince find out by visiting a gay club in Chicago’s Boystown , he agrees and runs immediately into someone he knows, an encounter that will change both of their lives forever.

Trey Giles is leading a life that would cause anyone else to have a nervous breakdown.  Trey is working two jobs in order to finish school, take care of his grandmother, who he lives with and dealing with a mother who refuses to deal with her serious substance abuse problems.  Dating is the last thing on his mind until he runs into Vince at the bar.  Vince is clearly uncomfortable, from the crowd to the music and when Trey suggests a more quiet jazz bar so they can talk,  the night turns into something neither man expected.  They talk for hours, Trey agreeing to help  Vince become adjusted to the idea of his homosexuality but in truth Vince and Trey find a connection with each other so deep and instantaneous that it leaves them unsure of what step to take next.  Vince’s biggest fear is that he will lose his family if he comes out of his closet, but if he doesn’t acknowledge his homosexuality to himself and his family, Vince just might lose the best thing that has ever happened to him, Trey Giles.  What will this self proclaimed family man do?

Heidi Cullinan and Marie Sexton are two of my “must read” authors.  They never fail to produce a story that will warm your heart and leave you thinking about love in all its combinations.   In Family Man, the authors give us an older Italian American who has been so afraid of his own sexuality that he has married three times in the past, each with the same predictable result, divorce.  His huge Italian family is pressuring him to date and enter into yet another relationship with a woman and Vince finally realizes that something has to change.  At first Vince comes across as almost a stereotype and I had a problem connecting with the character.  Vince stubbornly refuses to see that being gay does not lessen him as a man and until he can rid himself of that notion he won’t be able to accept his “gayness”.  It takes some time to really see Vince as the complex character he really is and most of that is due to his inner dialogs with himself that almost makes the reader lose patience with him.

The story really takes off when Vince and Trey connect with each other.  The story switches pov back and forth between Trey and Vince and it works as we become involved emotionally in their burgeoning relationship.  Trey’s situation is especially disheartening and stressful.  Overworked, he is trying to provide for his grandmother and deal with his mother who is an alcoholic and drug addict.  Cullinan and Sexton realistically portray what it means to live with someone who refuses to deal with their addictions.  It is heartrending in its futility and the damage it inflicts on those closest to the addict and the addict themselves is authentic at every level.

Vince’s issues are also examined and given an equally respectful treatment.  His fears of losing his large, Italian Catholic family if he comes out as gay are pretty realistic, especially at his age.  Vince has spent close to forty years denying his true self and that is a tragedy.  It takes time for Vince to visit all the ramifications of his decision and then move forward with his relationship with Trey.  I actually found the second half of the book just flies by as events speed up in both Vince and Trey’s lives.  It was my favorite part of the book.

Family Man is a wonderfully sweet story of romance and love found when least expecting it.  Cullinan and Sexton make a marvelous team and I can’t wait to see what they will come up with next.  Pick this up and prepare to meet an Italian family that is hard to forget and two MCs you will grow to love.

Cover art is wonderful, I wish I knew who the artist was to give them credit for this delicious and spot on design.