Rating 4.25 stars for the book

Rating: 4.5 stars for the Josh of the Damned series 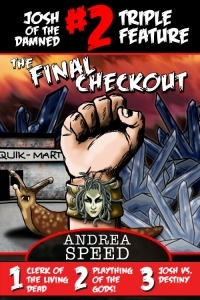 Josh Caplan, night clerk of the Quik-Mart was sure he was going to be fired after he (and his friends) stopped the Quik-Mart Corporate offices from opening a store in the hell dimension world called Dev.  But when he showed up for work, everything thing seemed normal or as normal as it can be when the convenience store you work in is next to a hell portal that  opens each night to let all sorts of amazing and hellish creatures come through to visit the store.  From werewolves in the parking lot, zombies needing a meat burrito to a lovesick Yeti, Josh Caplan has seen it all come and go on a regular basis.  Of course, Josh also has a handsome, cool vampire boyfriend named Colin and a less than competent necromancer, Mr. Kwon, as a boss.
But once a CEO, especially a jerk of a CEO like Clark Ryan IV, has an idea in his head, you just know that trouble is coming and it does.  In the last of the Josh of the Damned series, Josh, Colin, Mr Kwon and Bobo the Yeti must face a triple feature of threats to the Quik-Mart as well as all humanity and win.  Among those our intrepid group faces is a giant slug, Medusa’s sisters and of course the worst of all, corporate America.  But as Josh has said before “Dude, I’ve said it like a dozen times! Think of me as the minimum wage Gandalf —you shall not pass.”  And how can you not believe him?

I love, love this series.  I mean, it has it all. Josh Caplan, a night clerk so intrepid by nature, that he moves through life with an acceptance and ease that is almost shocking if it wasn’t’ so delightful. And he has plenty to keep him company from his stoner roommate, Doug, vampire boyfriend, Colin, Necromancer boss, Mr. Kwon, superboss, Medusa, lovesick compatriot Bobo, Gary the Tooth Fairy, and so many more.  Each more fantastic, sarcastic, and outrageous than the next.  In The Final Checkout,  Andrea Speed gives us the final 3 chapters in the Josh saga which of course revolves around the Quik-Mart Corporation’s plan to open a branch in the hellworld, Dev.

When I try to come up with reasons why I have taken this series to heart, the more obvious ones are front and center.   Andrea Speed’s humor which is evident in every aspect of the series, from the names (Kevin the Vampire Slayer to Harvey Mangoat to Gary the Tooth Fairy, just hysterical) to the small details such as Colin giving Josh a tablet because Medusa needs to talk to him and Josh assumes its an iHell (Dev’s answer to the iPad) because, well who wouldn’t?  It’s topical, sarcastic, funny as, well, funny as hell and yet, still contains a lot of heart, no, let’s make that emotion because well it just might contain a real organ or two as well.

Andrea Speed’s world building is perfection too.  Not too many details to bog down the story, just enough to make Dev feel authentic and hellish when Josh, Doug and Colin enter that dimension.  I also like that creatures that appear almost cartoonish in the Quik-Mart become more viably demonic on Dev, their home world, a lovely touch.

The truth of it is that it wouldn’t matter how funny the names or how humorous the situations, without characters whose vulnerability and endearing personality traits make them easy to connect with , then this series would seem a little hollow.  But not to worry, Andrea Speed brings the same detail she uses in her world building to constructing her characters.  All of her creatures, human and otherwise, are beautifully layered beings, with just those odd quirks that make them notable both inside and out of the genre.  You don’t have to tell me that Bobo is much more than he/she/it? seems, I just know it.  And Mr. Kwon, the not quite so capable necromancer who is afraid to tell his family just how bad his skills are?  Priceless.  Medusa and her sisters take sibling rivalry to the next level, while still making it oh so identifiable.

What can I say?  The plots are hysterical, the dialog giggle inducing and the characters (except for the corporate bunch) totally adorable. Please don’t pass The Final Checkout and this series up.

The three stories here are

1. Clerk of the Living Dead.  Zombies attack the Quik-Mart and Josh and Mr. Kwon must deal with this unusual occurrence along with the entrance of Kevin the clueless Vampire Slayer.  I think that this is my favorite of the three.  Josh and Mr. Kwon’s reaction to Kevin had me in giggles plus high props for the Buffy reference.  Josh gets a new bracelet or cuff as he would prefer we call it.  We find out more about the evil plot the Corporation has in store for everyone while Josh and Colin try to take their relationship up to the next level.

2. Plaything of the Gods.  Medusa needs Josh and Colin’s help in dealing with her sisters on Dev.  For the first time, we get to know Doug, Josh’s stoner roommate who delivers pizza.  I loved Doug and his assistance in things brought that “out of body” touch to the proceedings, nothing like a stoner’s viewpoint on Hell and its inhabitants to keep things “unreal, man”.  We also learn more about Josh’s new role as a Guardian, oh and there’s a giant slug that’s blocking the way to the Quik-Mart that has to be removed too.

3. Josh vs. Destiny.  The final showdown between corporate plans for domination and Hell.  Well, you figure it had to happen sometime, why not with Josh as our hero?  The CEO and its evil assistant Harvey Mangoat, (yes, really) vs. Josh, Mr. Kwon and his crew.  Timing is still everything and it starts when Josh and Colin are trying to have a romantic weekend, their first.  The course of true love or lust never runs smooth, and Hell is here to prove it.  Bobo is back (my favorite) to help in the final checkout.  Loose ends are tied up and Josh gets a fabulous apartment to have sex in.

I am going to miss these guys (and things).  I hope Andrea Speed can be convinced to give us a look in every now and again to see how everyone is doing.

Pretty Monsters (Josh of the Damned, #1)

Cover art by LC Chase is shear perfection.  I want a poster of it, really I do.

Andrea Speed also provides a soundtrack for The Final Checkout.  It’s amazing.  Listen to it here.

And finally, if this is your first introduction to the madness that is the Josh of the Damned series, read (courtesy of Andrea Speed) the opening pages of The Final Checkout:

Clerk of the Living Dead

There was an odd sort of comfort in just not worrying that you were about to die. Well, sort of.

Josh went home in the morning, certain he’d get a phone call about not bothering to come in for work tonight, that his last check would be mailed to him, but he was so unconcerned about it all that he just brushed his teeth and went to bed. So this was the end of his short career at the Quik-Mart—so what? There were plenty more low-income, no-hope jobs in the sea. Besides, he couldn’t have let those company guys through the portal, or reality would have imploded and everyone would have been killed. He’d picked the lesser of two evils.

When he woke up to find Doug on the couch, smoking a bowl and watching American Dad, his roommate told him there’d been no calls for him. Weird. Did it really take that long to get a message back to the home office? Or were they up to something? Since the portal didn’t open until nightfall, the home office was limited in what they could do during the day. He was sure this was some mix-up, but he got dressed and headed to the bus stop anyway.

Cindy, the early evening clerk, was finishing her shift when he showed up, and the Quik-Mart looked the same as always. She had no message for him, so he started working as normal, wondering if they were going to fire him mid-shift. Or maybe they’d be coming back with more guys this time? Not that it would help them. Bobo could probably crush the entire army, and with Colin helping, he could do it in half the time.

Colin showed up with the first lizard customer of the evening, although they weren’t together (well, as far as he could tell). Colin had a weird look on his face, one Josh figured was either worry or an upset stomach. Did vampires get indigestion?

Colin came up to the counter and pulled something out from his coat. It looked kind of like an iPad, only it was way thinner, black, and when Colin gave it to him, Josh discovered it was lighter than most paperbacks. Whoa, was there an Apple iHell now? “This some new kind of tablet?”

Colin shrugged and shook his head, sending a mixed message. “Medusa wanted to talk to you.” His expression was grave.

“So, what? This a new way to knock me out?” As Josh inspected the tablet for some hidden Taser nodes, the screen popped to life, and even though it was riddled with interference lines, he could see the brass figure of Medusa sitting behind her desk, wearing those same glasses as before, her hair rippling around her like it was caught in its own private windstorm, her lips so red it made her mouth look bloody. Her suit today looked to be an almost violent blue.

“Colin told me what an excellent job you did yesterday,” she said, her voice coming out staticky, but clear enough that the lizard in the chip aisle jumped and almost dropped his bag of Ruffles. So they all knew what she sounded like, huh? Maybe she broadcasted end-of-year messages, like the Queen or Lady Gaga.

“Um, oh. Well, he deserves credit, too. Him and Bobo. The Quik-Mart guys would have ignored me if they hadn’t been there.”

She smiled, but it seemed predatory. Her lipstick probably wasn’t helping. “Everybody received their due credit. As it is, Josh, I could use an agent who can work in your dimension regardless of whether the vortex is open or not. I’d say you passed the first test with flying colors.”

“Um, huh?” He kind of knew what she was saying, but he couldn’t quite believe it. Was this whole thing—from Medusa tasking him to stop the home office, to the stupid parking lot battle—a test?

Josh looked at Colin, but he stared back blankly, his expression giving nothing away. “Umm . . . do I have a choice?”

Her grin grew wide enough that it nearly threatened to split her face in half, and her snakes quivered like they were waving goodbye. Or laughing at him. “What do you think?”

Oh shit. Not until this moment had the job of burger flipper ever seemed so damn good.