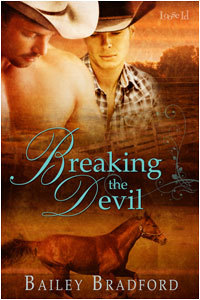 Twelve years ago, Mack Wilson made the mistake of his life, giving his love and virginity to his best friend Justin who then threw his love back at him telling Mack he was just a youthful experiment before leaving town for good.  Justin’s hateful message left Mack a broken man unable to get past that experience and Justin.  Now Justin has returned wanting to pick up where he left off, in Mack’s bed.  And despite Mack’s pain and fury, he lets him.  But the past is still haunts Mack and Justin has many obstacles to overcome before he can reclaim the man he walked away from.

Will pride and pain stand in the way of true love or  together can Mack and Justin break the devil of a past to have the love they always dreamed of.

Normally when I finish a Bailey Bradford story (either in the Southwestern Shifters or Leopard’s Spots series), I allude to the shortness of the book as one of its faults.  Here at 127 pages, I can actually declare that Breaking the Devil is far too long.  But let’s get to the positive element of Breaking the Devil.  That would be the storyline.  I love a “lovers reunited” story as well as the next person.  I can’t wait normally to see what each author brings to such a common plot line.  Bailey Bradford has the ability to create interesting universes or flesh out cliched ones, unfortunately neither of that happens here.  But at least she started out with one guaranteed to catch ones interest.  Too bad it stayed at that level, an idea.

First the plot and the title, Breaking the Devil, which refers to a stallion Mack has been given to break.  Right away things go off course as Mack states

Inside the corral stood the meanest, foulest stallion he’d ever seen—and also the most magnificent. A huge horse, too, his size matching his nasty disposition. Mack wondered half the time why he’d ever bothered buying the damn critter. The other half of the time he admitted it was because he didn’t like anything that was easy, not in most cases, at least. While he didn’t want a horse that was going to stomp him to death, he did like a challenge.

In that paragraph, Mack has bought this stallion.  Now a mere two paragraphs later, see if you can spot the error:

“Enough already,” he scolded himself. It was a certainty that Justin hadn’t wasted years—years—dwelling on what might have been. Normally Mack didn’t think on it so heavily himself, but that angry red horse just stirred up memories. He really shouldn’t have agreed to tame the damn critter.

Yep, quickly it has changed from Mack owning the horse to Mack taming the horse for someone else and that is at the beginning of the story.  Plus Mack starts to “gentle” the horse, not break him, a huge training difference (except to an author who hasn’t done the homework).  This is one of the mildest of errors located in Breaking the Devil.  Because shortly thereafter this scene, Justin reappears and for the next 100 or so pages, they do nothing but hump like bunnies, tons of by the book sex scenes that actually lack the heat of Bradford’s other stories.

The reader is told that Justin’s leaving broke Mack (his word) but instead of exposition we get tons of sex scenes.  What happened to the storyline?  Why did Justin leave and what happened to all the anger and pain Mack storied up over 12 years?  Seemingly unimportant because we have to wait until almost the end and then get just the thinest explanation possible.  I don’t know about you but I like a story with my story.

Then there are the thin characterizations. Both characters come complete with over the top emoting and dialog more suited to Telemundo’s telenovelas. The men glare and “squeal like girls” , (again Mack’s description), ready their fists and sneer, voices hit “like daggers to the heart”, and they swoon and are consumed by love. Now keep in mind, Justin is a hardened vet, with several tours of duty behind him and Mack is 30 years old rancher and you can see the issues. Mack and Justin, and particularly Mack seem more like a conglomerate of personality traits than an actual character. Even the dialog put into Mack’s mouth is as disconnected as the aspects of his personality. He will call someone an “idjit”, then “bub” , then a countrified saying like “He asked me what was wrong when he found me in the barn, sobbing like a baby denied the tit, you know.” pops out , then Mack returns briefly to sounding like a 30 year old. Mack is a seasoned rancher but can’t stand the sight of his own blood, a real problem when just the daily chores brings more cuts than you can imagine. This might seem like a funny trait to give a character but if you are well acquainted with the chores of a ranch hand, then you know it makes no sense. Justin too never comes across in any realistic way as a Marine.

A character called Craig, a soldier with Justin, returns with Justin to help run his ranch.  We are told Craig, a fellow Marine, is dangerous, a murderer for his country (Justin’s words), etc,  and the reader starts to have expectations that Craig will figure greatly into the storyline.  Instead after considerable buildup and attention to Craig’s explosive persona, the character disappears completely.  I thought this a real misstep as Craig was far more interesting than either Justin or Mack, although more thug than Marine.

The ending finished it off for me.  I have ridden  horses all my life and owned three.  At the end of the story, Justin and Mack decide that Diablo (the stallion now has a name) will remained unbroken, that they

“…kind of like the evil bastard like this, all angry and righteous and untamed. He’s beautiful, like raw power set free on this earth, and I know it sounds silly probably, but I just would hate to see his spirit lessened from this brilliant, fiery sun to a dim glow.

And  all I could think was really? How was the horse to get groomed? Or the vet to give him the necessary shots or float his teeth when the horse can’t be touched?  And basically they didn’t “break the devil” after all.  So much for the title and so much for any type of research. All dumped in favor of an unrealistic ending to a mess of a book, more a collection of cliches than actual realized plot.  Give this book a pass even if you like Bailey Bradford’s stories because there isn’t one here.

Cover art by Posh Gosh is lovely but just as over the top as the storyline.

Previously published by Loose id in 2009 at 66 pages. Skip that version too.