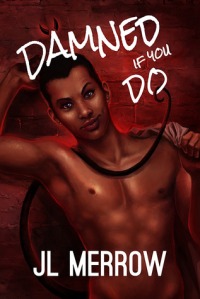 What does a male succubus (yes, you read that right, a male succubus) do when he is set free on Earth by an accidental summoning? Why, go looking for his next delightful meal and loads of hot, sexy fun of course.  That is exactly what Rael does after being set free.  But there is another succubus in town, one that is killing the people it is feeding upon, not just enjoying them and leaving them happy.  On the trail of the succubus killer is Detective Lars Thornsson of the Paranormal Enforcement Agency. Lars is half human half Valkyrie and all around gorgeous gay male.  When Det. Thornsson and his hard as nails partner, Chelle Rochelle,  show up at the nightclub looking for the killer show up at the nightclub looking for the killer, Lars has all the club boys drooling. This fact not lost on Rael who decides the detective is just the man for him. Then Lars and Chelle  find Rael instead of the true killer and take him in to headquarters for questioning.  Almost immediately lust and mutual attraction sets in and when the killer sets her sights on Lars, there is nothing Rael will do to keep his man  safe and at his side forever.

The Damned If You Do collection includes all four of the Rael and Lars stories that chart their relationship from beginning to HEA, which is saying a lot when you consider one is a sexy male succubus and the other a half Valkyrie half human. .Listed below is each story and a mini review of each wild zany romp:

Damned If You Do: The Complete Collection is composed of the following four stories which were all initially released separately:

1.  A Calling For Pleasure: The first in the Rael and Lars series.  We see how Rael makes it into our universe, his immediatel impact on Lars and his investigation as well as the start of their relationship.  Wild, wacky, and great fun.  Rael is a charming, sexy and endearing character as his beloved Lars.  Lars is huge and hugely vulnerable, with a sarcastic hard as nails partner  Chelle Rochelle and a wise and wry Police Captain, perfect for keeping within the stated genre and having fun with it.

At 25 pages, it is the shortest story and it shows in the lack of depth in the characterizations and plot.  Its cute, funny and fast.  Really, it just sets the stage for the longer and more involved stories to come and that’s fine when it is in a collection.  You can move on and still be satisfied that you read the first in the series.  It also has my least favorite cover as Rael is described as lithe, gliding and sex on two legs.  That model is just too muscular to be Rael.

2. A Blast From The Past: Lars and Rael are living together much to the chagrin of his cop partner, Chelle Rochelle.  Lars continued involvement with Rael is also kept hidden from his captain and coworkers.  Both Lars and Rael are afraid that Rael will be banished back into Hell, something Lars and his squad do with regularity to supernatural offenders.  But this is Rael and trouble is his middle name.  So of course, Rael’s ex boyfriend, Lev, enters the picture, determined to get him back, no matter the cost.  At the same time, someone demonic is setting fires all over the city and its up to Lars and Chelle to find the perpetrator and send him home.

This is such a cute story.  Its short at 68 pages but is still longer than the first story. The plot is more involved, the action swift, and the resolution perfect for the story setting and characters.  Everybody here is over the top in characterization, almost into the parady column but somehow is all works together.  I especially appreciate that with each new investigation, the characters increase in complexity along with the case the book revolves around.  Merrow gives us more back history for each person as the story progresses.  And as we learn additional facts about them, the more fully realized each character becomes.  Also each story also sets the framework for the next in the series.  Great job, and great little story.

A Wish Too Far:  Someone is peddling little pink pills out on the streets.  Those pills, called Wishes, are exactly what the Chinese philosopher has in mind when he said “Be careful what you wish for” because the wish always comes with a painful twist.  Det. Lars Thornsson and his partner Chelle Rochelle of the Paranormal Enforcement Agency  need to find the pill pusher and fast before someone is seriously injured. Rael thinks he knows the drug dealer but why would his cross dressing childhood friend do something like this?  Lars and Chelle’s case goes off the tracks quickly when Rael gets involved but the outcome will shock everyone in the case.

This 73 page story has a little more depth and pathos to it.  The cross dressing being, Shax, is a more vulnerable character with a darker past then we have seen in the previous stories.  The author manages to bring a more fully realized character into the fold while still keeping the humor intact.  Again the story is fast paced, the action and plot threads twisting around  faster than you can shake a canister of salt at it, and the ending is one I didn’t see coming.  My  second favorite story of the group.

4. A Glutton For Punishment: Once again Rael is the center of attention and it gets him nothing but trouble.  Rael and Lars relationship remains in the closet.  Unhappy with hiding, Rael takes to cooking for his man and is soon discovered as Rael’s talent for gourmet cooking lands him a job on the popular show Devon’s Plate as a guest chef.  But when the show’s host, Devon LaGrande goes missing, all suspicions land on Rael as the cause. With Rael being the center (again) of one of Lars’ investigation, Rael has to move out of their apartment and pretend to be his coworker’s partner, much to his and Lars chagrin.  Then Rael starts to receive threatening letters and the search is on to find the person responsible before Rael disappears too.

At 136 pages, this is the longest and most complicated story of the group.  There are several plot threads being juggled here, and the author does a great job of keeping us involved and in the loop, no matter how crazy a direction the story takes, and it takes quite a few.  Rael has become more than a sexy caricature of a succubus by this time and the reader is more invested in his and Lars future.  Lars and Chelle also have more dimension to them and as the story brings all the threads together in a happy ending, the reader leaves more than satisfied that Rael and Lars have a wonderful future ahead of them.  My  favorite story of the group.

I think this group of stories works best as a  collection than as separate books.  Had I purchased them separately and read them that way the individual story ratings might have been lower.  But because I was able to read them one after the other, the plots and increasing character depth flowed smoothly together and made for a very satisfactory read.  This is not a collection to be taken seriously.  It is to be enjoyed as the lighthearted fun romp that it is and who doesn’t need one or four of those?

I love J.L. Merrow as an author.  She has the ability to write this lighthearted romp and then pull us into the darker stories like her wonderful Pricks and Pragmatism without so much as a blink of an eye or should that be flick of a key?  If you are a first time Merrow reader, enjoy this paranormal series for the fun it represents and then start in with her other stories, perhaps Trick of Time, another favorite of mine.  I am sure you will be adding this author to your must read list shortly thereafter.  She is definitely one of mine.