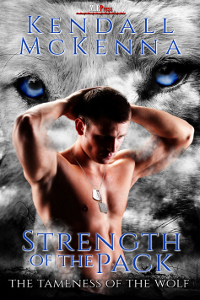 At a time when tales of the Human Dominant and his True Alpha Shifter have been consigned to myth, along comes human Marine Lt. Lucas Young.  As he readies his command of mixed human and shifters for their deployment to Afghanistan,  he is assigned True Alpha pack leader Sargent Noah Hammond to his platoon. From the beginning, Lucas and Noah circle around each other, Noah pressing for dominance and control while Lucas is equally determined that his authority and rank be recognized and respected by the True Alpha. Small skirmishes and exercises bring human and shifter together in an ever strengthening bond as Lucas learns to dominate Noah and understand the ways of the Pack.

Once their platoon has landed in Afghanistan, they find themselves under fire, and the wartime stresses find their bond deepening and getting stronger with each trial and success. Soon the pair are mirroring the legendary bonding of Dominant and True Alpha from ancient lore. But the bonding is incomplete and when one is wounded, can misunderstandings and military regulations be overcome in time to save them both?

It has been a while since a new shifter book blew me away.  Strength of the Pack has done that job and then some.  McKenna gives us an alternative world where shifters and humans have been together for millennia and throughout much of history.  But through human rewriting, their place in our history has been purposely obscured. Now, because of some unmentioned war or occurrence, shifters are now partnering with humans in all aspects of life, including the military.  McKenna gives us just enough back history to whip up a thirst for more while still making her current setting feel realistic and well thought out.  Little by little, McKenna delivers glimpses of this magical back history, reinterpreting such legends as Joan of Arc and Hanging Gardens of Babylon.

McKenna’s world building is a wonder with no element left to chance.  We are given pack hierarchy, which is folded  into Army and Marine structure in such a way as to feel utterly real and authentic in every detail.  She has a way of describing army life as lived while deployed that I wondered if she was a Reservist or active in the military.  From their packs to their guns, to the dust and heat of the land they are bivouacked on, it felt as though you were there with them, close to the insurgents and ambushes.  It just rang true, right down to how the Pack reacts after skirmishing with the enemy.

And that brings me to another aspect of this book that I loved, the natural history of the wolf.  Unlike other shifter stories, here the wolf shifters act like wolves, including their rank and status within the pack and how it regulates their behavior to one another.  While I enjoy seeing different authors take on shifters, as a park naturalist I love seeing an author who gets the science right, especially where natural history is concerned. Kudos to McKenna for that lovely take on wolf shifters and shifter society.  She also opens up for an explosion of options in the books to come.  I can’t say more without giving away some of the plot but oh my, what possibilities could be in store for us in the books ahead.

Kendall McKenna’s characters are worthy of such marvelous world building too.  I loved the reserved nature of Lt. Lucas Young.  He is brilliant, concerned about regulations and the safety of those under his command.  There are so many levels to this man and they are slowly peeled away as he  realizes that he is not prepared to handle the presence of either a True Alpha or shifters in his platoon.  The decisions he makes (and we are inside his mind as he makes them) paint a portrait of a man, honest to his true nature with the capacity to grow with the challenges before him. Lucas is matched up with the indomitable True Alpha, Noah Hammond, a nordic warrior shifter.  This is not a cardboard hero but again a being adjusting to a bond thought unheard of and having his own problems with it.  McKenna has made Hammond vulnerable, at least to Lucas, a necessary facet of his personality if we are to believe their bond to be true.  This will be one of my favorite new pairs of the year.  The needs of the wolf for taste, touch, smell and markings deliver sensual scene after sensual scene as Lucas and Noah adapt to each other and their needs.

This book is 336 pages long and felt like 90.  I got to the end and wailed because I wanted much, much more.  I have so many questions for McKenna.  Has the government been working to find this combination again?  When did the shifters come forward again?  And what happens to Tim Madison?  Consider my feet stamped in frustration.  Lucky for all of us, this is just the beginning.  I hope the series is a long one.  But either way, long or short, I can’t wait for the next installment in The Tameness of the Wolf.  Go get your copy and let’s start this journey together.  I can’t wait to see where it takes us.

It’s a very good thing you checked in today!

First, if you missed yesterday’s post, you should go check out. I discussed world building for paranormal stories, and some of the features I included in my books, Strength of the Pack and Strength of the Wolf. There’s still time to enter to win an e-book copy of Strength of the Pack, so jump back and take a read, then throw your name in the hat! The winner will be announced, right here, tomorrow!

Second, Strength of the Wolf continues to claw its way up all of the bestseller lists!  Jeremy and Tim are winning hearts, and their ongoing struggles are keeping readers engaged! The story expands the werewolf universe, and provides glimpses into the lives and families of the beloved characters.

Here is everything you need to know to get entered for your chance to win! The winner will be announced tomorrow, as well, so don’t wait! Get entered!