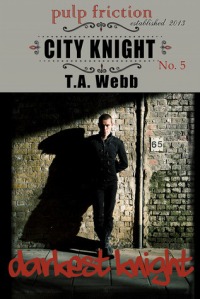 Marcus Prater and his lover Benjamin Danvers have never been happier.  Marcus has reconciled with his brother Frankie and now Frankie and Frankie’s kids are now frequent visitors to his home.  His own wounds have healed as has Ben’s and now they are preparing for their first Thanksgiving as a couple.  What could go wrong?

Well, that would be everything.  Wick Templeton is missing along with his boyfriend Ned.  Archer calls, asking if Marcus has read that morning’s paper. Young, gay men are still turning up tortured and dead, including the twins mentioned in the headlines this morning.  Twins wearing medallions that hold a special meaning for Archer, Marcus and, of course, the missing Wick.

And when one of Marcus’ old contacts on the street, an underage prostitute called Brady,appears bruised and bleeding before Marcus with a startling request, one connected to Ben’s dead friend Travis.  Well, Marcus can’t say no and ends up bringing Brady home with him to keep him safe and to attend to his wounds.   So many painful memories arising, so many hidden secrets starting to come out.  Where will it all end?  Will this truly be the darkest night for Marcus, Ben and all those they love?

Just when I think this series can’t get any better, it surges into a whole new realm, expanding the storyline to incorporate more mysteries, hidden depths to characters we have already met, and exploring the new connections in old established relationships, adding texture and layers to already terrific characters and their bonds with each other.   Of all the books, Darkest Knight is the one that brings all the other men and their lovers together in one place, all but one.

Everyone has gathered together at Marcus and Ben’s place for Thanksgiving.  It starts out as a time of joy and  reconciliation then it turns  painful and bitter with one phone call.  Every  the buried emotions and old pain rushes out, first in Marcus and then in the others, leaving the new lovers to handle the situation.  I loved how  the author brings Jeremiah, Rory, and Ben into their own in this story.  Each demonstrates a new found strength and depth of character that is not only surprising but disarming.  It’s unexpected and finally grounds each man not only in their relationships to their lovers but with each other as well.  It’s wonderful in so many ways.  It redefines how we look at all the relationships present, it exposes old past histories while providing a new avenue of thought with regard to the mysterious deaths of young rent boys in the city.

I loved that T.A. Webb chose Thanksgiving as the occasion to bring them all together.  Its our traditional family holiday and these men have been each other’s family for over 15 years.  And the fact that one of them is not only missing but has kept secrets from some of them all that time is doubling their feelings of hurt and betrayal.  It’s a marked contrast to the new found love that most of the original members  have now found, with those lovers present and now incorporated into that tight band of men.

Then Webb adds Brady, an resilient, underage rent boy and Frankie, Marcus’ brother, to the mix and things really start to bounce out of control.   Brady is a wonderful little portrait of a kid thrown away at a hauntingly young age but has who succeeded in surviving the streets and the predators that hunt there, if only just.  I love Brady and want more of this amazing kid.

Here is a small excerpt as Marcus comes across Brady on the street:

And in every face, every kid standing there with all the false bravado, in every potential target, he saw his love.

He had to focus on their job tonight, though. One young man hadn’t made it, and it broke something in Benjamin when Travis had been murdered. Oh, he still went to school, and made love with Marcus, and joked with Jeremiah. But he’d tried to help the boy and it blew up in his face. And Wick…he’d said he would help and the boy slipped away and now he was dead. Goddamn it, Marcus needed Wick and that crazy Bayou or Banyon or whatever the hell his name was to help him find Travis’s killer.

The feel of his heart racing in his chest and the tension in his jaw from grinding his teeth made him stop, close his eyes, and take a couple of deep breaths. Getting mad at Wick wouldn’t do him any good right now. Now, his Benjamin needed him. So fuck Wick, he’d deal with him later. But that made him feel guilty for being mad at his brother, and then he was right back in the same loop.

“Mister Marcus?” He almost didn’t hear the small voice and walked past the kid hanging outside the alleyway leading up to the Zesto’s and McDonald’s. Glancing around, Marcus stepped in the space and nodded for the young man to walk with him.

“Brady. It’s been a while since I’ve seen you. I was worried about you, son.” The boy—he was one of the younger ones Marcus had tried to keep his eye on before he’d been shot, and he’d lost track of him—was skinnier than he remembered, and his hair hung in greasy hanks around his face. He walked stiffly and slightly bent over, and all of Marcus’s red flags went off.

His head nodding as if he heard music no one else could hear, Marcus saw the sideways glance Brady gave him, and then looked around like he was scared of either being overheard or seen. Part of Brady’s twitches were affectations, so people would leave him alone or think him helpless. The fact of the matter was he’d been on the streets since he was twelve, and was alive now at the ripe old age of seventeen only by the grace of God and a buttload of tricks he’d learned over the years. If he was patient, Brady would tell him what he wanted or needed.

What happens next is both heartbreaking and startling in its intensity.  You really have to read it all to get the full benefit of Webb’s realistic descriptions and spot on dialog that brings this young man and his pain so vividly to life.  More than a few tissues will be needed before all the mysteries are solved and bonds can be knitted back together.

City Knight, of which Darkest Knight is the fifth book,  is one of four interconnected series.  The others are Triple Threat by LE Harner, Chances Are by Lee Brazil and Wicked’s Way by Havan Fellows.  You can read each series by themselves.  But read together, you will enter a rich world inhabited by strong, intelligent men, a gritty band of brothers and their lovers.  Grab them all up, and read them one after the other, starting with book one in each series.  Each is remarkable in their own right, but together form a Pulp Friction universe you will never want to leave.

Here are the books in the City Knight series in the order they were written and should be read to understand the men and their relationships and the events that occur: