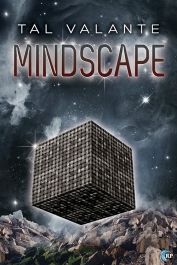 History of family service in the Spavy meant that Shane Cawley was just continuing in the family tradition when he joined the Interstellar Navy.  But for Mark Sayre joining the Interstellar Navy meant money for his mother and brother, for food and rent. Plus Mark had another goal, that of keeping his little brother out of the colony mines that sent their father to an early grave. When the two men met on the spaceship Cyclopes, Shane is an officer to Mark’s enlisted status but their affection grew despite Spavy regulations against it.  Mark completes Officer Candidate School  so that Shane and Mark are now free to move forward with their love. A love made deeper by the Resonance, a joining of two minds so rare that the odds were in the millions against it.

Then intergalactic war breaks out, the Cyclopes attacks and one of the couple is captured by the enemy.  In the aftermath of war, can love and their Resonance survive, when one of their minds is shattered?

Tal Valante’s Mindscape is an inventive jumble of romance and time periods, flashbacks and present day events, all set in outer space.  We enter the story as Shane walks down the hallways of the Rigsby Psychiatric Ward.  He is there to see Mark, a returned POW whose mind is shattered by torture endured while in captivity.  As Shane tries to reach Mark’s mind, the narrative moves back and forth between their past and their present.  This format is a little confusing to start off with, but in a strange way it works.  Tal Valante’s story is formed around the nightmare landscape of Mark’s mind and Shane’s attempts to reach him inside that mental framework.  It is full of shards of memory so a jumbled, somewhat confusing format works within this situation.  It takes a while to get used to it but once it starts to feel as real as the broken mind that Shane is trying to heal.

There are so many wonderful aspects to this story.  The “mindscape” that Valante creates for Mark is as haunted, and harrowing a place as one would expect from a prisoner of war.  That is the part that feels the most immediate and alive in the story.  I also found Shane’s emotions and the details from the Psychiatric Ward to be as painful and emotionally intrusive as the author intended them to be.  Shane’s many attempts to enter Mark’s mind and the anguish with which each failed attempt is met is believable and human.  I thought the twists of the plot as Shane moves through the obstacles raised by Mark are ingenious and some of the best elements in the story.

Did I think there were some less effective aspects here? A few, that with additional length could have been readily solved.  I thought the author’s universe building interesting but lacking in details that would have given it more substance.  The enemy was telepathic, that we find out.  But what else made them attack?  What did they look like? Where is the history behind the war?  That would have been a great layer to add.  Also a huge deal is made of the Resonance, that rare joining/meeting of minds.  I felt that again we needed to “feel” more of the Resonance between Shane and Mark in order for it to become as real as the men did.  And finally, I wish we had been given a few more scenes of Mark and Shane’s earlier relationship so the devastation that Shane feels upon losing Mark and the Resonance between them (and their long term love affair) felt as authentically deep  as they told us it was as it is central to the story.

I love science fiction and can absolutely recommend Mindscape by Tal Valante to lovers of romance as well as science fiction.  It is an inventive story by an author I was not familiar with.  This book has remedied that fact and now I look forward to investigating more works Tal Valante, whose creative mind brought this story forth.

This is how it starts…..

The first time Shane enters the Rigsby Psychiatric Ward, the noise and smells slam into him like a fist to the solar plexus. The air reeks of some lemony disinfectant. Somewhere, someone is screeching a song, and from nearby comes the hissing of a man whose burned hands are being tended by a nurse. It’s all Shane can do not to throw up. The thought of Mark, of all people, being locked in this place . . .

He’s grateful when the head nurse comes out to meet him, if only because it gives him something else to focus on. She insists on giving him the third degree.

She leads him down a hallway, past a woman who laughs at him like a hyena, and into a small room with two beds. One is occupied by a man who is lying on his back and burping repeatedly. On the other bed, looking dazed and oh so out of place, is Mark.