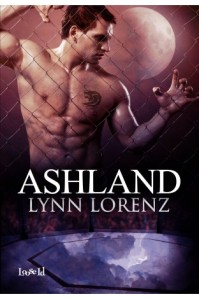 For years Dan Stoltz has dreamed of owning his own werewolf fighter.  He apprenticed with the well-known trainer and friend, Murphy, and now he is ready to make his first purchase.  At the auctions, Murphy points out a slave that he thinks would make a good fighter, one being sold because his owner is broke and can’t pay his back taxes.  Dan is wavering,as he has decided upon an Asian were. Then the slave raises his head and looks into Dan’s eyes.  With that one gaze, Dan is lost and determined to have Ashland at any cost.

Ashland has known nothing but abuse at the hands of his former owner, Durio.  Starved, sexually abused, kept weak for his owner’s amusement, now Ashland is for sale again and fears the new master who buys him. He sees Dan Stolz watching him on the auction block. When Dan wins the bidding war and buys him, Ashland finds that his life has changed for the better. With good food, rest, and training, Ashland thrives, becoming a skilled sparing partner.  And something more happens. Dan and Ashland are attracted to each other, lust and something more threatening the bonds being built between master and slave.

Ashland is the second installment in the WereWolf Fight League series and the main characters make this a very different book from Tor, the first in the series.  In the first book, the relationships are between slaves, the Owner/Master Marrack is a secondary character.  In Ashland, the relationship starts with the characters occupying two different strata in society.   Dan Stolz, Murphy and Ashland’s former owner Durio are free man, Masters in every sense of the word.  Lorenz’ universe seems to mirror ours here, at least as far as economics, as each man above has a slightly different financial reality.  Murphy is doing well as a seasoned successful trainer.  Dan is the apprentice who is ready to branch out on his own, lower middle case on the rise.  And then there is Durio, bankrupt and unable to pay his taxes, someone on the way down and hopefully out.

Next are the slaves, human and were.  Some fighters are breeders and are intact.  Others like Ashland have been “snipped”, they can function but not reproduce, an almost gelding as it were.  There are sex slaves of both genders, and instead of prison, those free men who have committed crimes against the government or society pay by becoming slaves themselves, condemned to perform the worst tasks society can give them (getting rid of the dead and cleaning up the streets).  Owners have total control, including rape, over their slaves, although change is coming via were and slave right activists.

A Master/slave relationship is by  definition an unequal relationship as the Master has total power over the slave.  So I was expecting to see something of that  reflected back in the story. And outside the brief mention of Durio’s actions towards Ashland, I didn’t see that. In fact I found this owner/slave dynamic  missing in this slave/owner relationship story.  Almost from the first, Dan is treating Ashland less like a slave and more like a person he wants to get to know.  Yes, Dan is a new owner, one of the people who believe in humane treatment of slaves, but still I found his attitude and behavior towards Ashland anything but masterful.

I have to admit I didn’t mind that this aspect was missing from the story (I actually preferred it this way) but just found it a bit odd. Their love for each others develops at the same pace as Ashland’s training, with the traumatized Ashland wanting Dan’s affections to Dan needing Ashland yet not wanting to abuse Ashland’s trust.  Apparently men don’t communicate very well in alternate worlds either.

New characters are introduced, another Master/slave/slave grouping, that I expect to appear in the third book.  I liked this trio.  They have real possibilities as men who respect each other within the limitations of their society.  I think my problem here is that the inequality within Dan and Ashland’s relationship continues even when Dan professes his love for Ashland.  Dan calls him “baby” which is accurate given his inability to read or navigate in Dan’s world.  Ashland remains emotionally unprepared for the status Dan is laying on him.  At least that is the way it seems to me.

There is a measure of suspense with regard to Ashland’s former owner trying to reclaim his slave.  The resolution of this plot thread is so pat that it felt perfunctory.  Wrapped up all too quickly, with many issues left unanswered, I found myself wishing that Lorenz had added at least a chapter or two of the “behind the scenes” mechanisms that made the ending possible.  I found myself liking this story marginally less than Tor perhaps because of the difference in relationship as well as the ending.  I think that the people who liked Tor will find themselves divided over this story.  And perhaps those that didn’t care for Tor will love the dynamics in play here. Either way Lynn Lorenz’s wonderful, heartfelt characters make this a werewolf story to add to your collection.

Stories in the WereWolf Fight League series include:

No Publishers warnings accompany this story, unlike Tor, the first in the series.