When a tornado meets a volcano, nothing is safe. 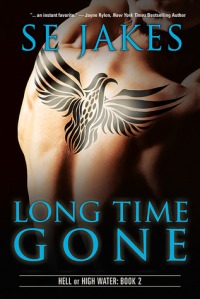 After their last “off the grid” mission was finished, Tom Boudreaux was given a choice of partners,  Cope or Prophet.  Tom chose Cope thinking that he would keep Prophet safe by removing him from Tom’s bad luck.  But now three months later Tom’s decision has brought him nothing but regret.  Regret and a constant anxiety over Prophet’s whereabouts and  safety as Prophet has left EE Ltd and no one is sure of his whereabouts.

When Tom Boudreaux walked away from him and their partnership, Prophet realized two things.  One that he no longer wanted to work alone, and secondly he had just let the man he wanted walk out of his life.  After Tom left, he wrote Prophet emails, including one that asked him for a personal favor, never sure if the man would get them.  He did.  And now Prophet is heading to New Orleans to see Della, Tom’s aunt,  to make sure she stays safe as a hurricane approaches.

Fearing for his aunt’s safety as a hurricane bears down on New Orleans, Tom disobeys his employer’s orders and leaves for his old home town and an explosive reunion with Prophet, a man he hasn’t been able to forget.  The horror that is Tom’s past rises up around them along with the flooding bayou waters bringing alligators, murder, and old enemies to the surface. Tom and Prophet must fight not only to stay together but for their lives as well.

SE Jakes has done it again! Long Time Gone, the 2nd book in the Hell or High Water series, is one sexy, tumultuous, and action-packed roller-coaster of a novel.  A Mr. Toad’s Wild Ride and Spy Hunt for adults and it couldn’t be more satisfying.  With  Tom Boudreaux and Prophet Drews, Jakes has added to her pantheon of complicated, conflicted Alphas intensely connected by their pasts as well as professions as spies and covert ops.  These are tough, wary, secretive warriors.  So it makes sense to make these men (and us) work hard to establish any sort of realistic relationship, if one is possible.

As Catch A Ghost ended, we saw Tom accept a new partner, walking away from Prophet and their intense relationship.Three months have passed since that event and things can’t be more different for both men.  Tom is bored out of his skull, buried in a job he doesn’t want with a partner who is making him crazy.  He is missing Prophet so deeply that he is writing the man emails he isn’t sure Prophet will ever receive.  Why?  Because the man has disappeared and even those closest to him are unable to find him.  Prophet left EE, Ltd, their agency after a fight with their boss.  And now he wanders the globe on his own dangerous missions that by their varying nature send pointed messages to the security agencies around the world.  These men are coming to a crossroads and it will take a hurricane to set them back on the path together.

The world is familiar with the impact a hurricane can have on the City of New Orleans and it’s surrounding parishes.  So it definitely works to bring the reader immediately into the setting for this novel by bringing this natural disaster back to life in the same place where Katrina left so much devastation and death.  It lays an emotional, knowledgeable base for the actions that follow and the choice of New Orleans, with its fantastic mix of voodoo and beignets, of alligators and corruption, is the perfect stage for a story where “the seventh son of a seventh son”, and a man named Prophet will reunite to deal with Tom’s demons, ones that have haunted him from birth, just as a new hurricane bears down on a town familiar with disasters of every kind, natural and man made.

With the hurricane coming, and New Orleans as the setting, Jakes has all the elements she needs to create a story wide ranging in emotions, explosive in actions and incendiary in the sexual heat generated by  Tom and Prophet, really this story has it all.  Tom and Prophet were enigmas in Catch a Ghost.  Here we start to flesh out their backstories, Tom’s especially.  The angry, out of control agent seen fighting in the first novel is laid bare, his character explained through the bayou, his family and the past events that continue to stain relationship and friendships today.  The bayou and the Cajun culture flourishes here in the touches  and in the metaphors Jakes creates for her two battled scarred men fight nature and others to be together, including their own  doubts and best intentions.  As the lightning flashes and the storm rages outside the house where Tom’s aunt lives, it parallels the passion and emotional chaos occurring within Tom and Prophet as they meet up again under dire circumstances.  It’s scary hot, swirling with anger and longing yet still oddly humorous at the same time.  The water rises along with Tom’s past, bringing up bodies, old enemies seeking revenge and retribution  in a maelstrom of hate, anguish and pain.

It’s also not just Tom’s past that is dealt with, Prophet brings his own share of torment as well.  The thunder and lightning flashes mimic the sounds of guns and warfare throwing Prophet into paralyzing states of PTSD and flashbacks.  One man’s horror combines with another’s man terrifying upbringing but salvation or success is never a given.  Not with these two, the most they can ask for is time and hope.

I suppose this is the best time to bring up alligator kink.  I now have one thanks to SE Jakes and her boys.  I never saw that coming. I admit that when someone mentions alligator ‘rastling’ in the past, it conjured up images of good old boy poachers ,bootleg tanners and hokey sideshow venues in the south or any show on TLC.  No more.  Now I think of Tom and Prophet and New Orleans. It’s a wild scene as they roll passionately about Aunt Della’s kitchen floor, as well as a cabin in the swamp.  It’s sexy and funny and yes, satisfying as the boys reunite after 3 months of separation. All those wet, naked rolling bodies is further later detailed as Tom puts on a show as he wrestles and rolls an alligator into submission.  It opens a new sexual kink for Prophet, one that plays out in a white hot moment to come.

So much lovely, lusty sex here, which works on many different levels.  Sex is the number one choice of communication between Tom and Prophet.  They use it to defer those “we have to talk” situations while saying so much to each other by their touches,caresses, and telling strokes.  Because these boys have forgotten how to talk, how to open themselves up to another person, if they ever knew how to begin with. So when Jakes’ plot forces them to share parts of their past with each other, its realistically painful and monosyllabic.  It also makes us (and the person on the receiving end of said pertinent data) so appreciative of the information that we do get while making us a little frustrated at how much more there is to know and understand about the complicated men before us.

To continue the metaphor, Jakes’ narrative is a pitching deck on hurricane waters.  If the story feels a little choppy in places, its because that format works to keep every one off balance, as the waves throw one thing after another at our couple.  Sometimes it looks like they are going to drown in their past other times they crest towards the surface and safety.  I love that we are never sure what the next page and scene will bring us.  The suspense is wonderful and agonizing for us as well as Tom and Prophet.

Tom Boudreaux and Prophet Drews are the real deal, that addictive couple that snares us at the beginning of a potential relationship and never lets us go.  Each stumble forward, every tentative gain made towards a lasting relationship is met with a realistic picture of just how fragile and momentary those new stages in their relationship are.  Just one phone call, one appearance by the wrong person and all could be lost.  Such an overview paints a veneer of uncertainty and suspense over all the events and actions that occur within the story.  Tom and Prophet are together again but for long how?  Where is the next enemy coming from?  Their present or their past?  Jakes keeps us teetering on the edge of our emotions along with Tom and Prophet as they navigate the rough waters ahead.  I can’t wait to see how they will handle what this fine author has to throw at them (and us).  It is guaranteed to be chilling, unexpected and downright sexy.  I was always one for the E Ticket rides and this is that in spades.  I just hope we all survive the journey.

Long Time Gone and the Hell or High Water series are highly recommended to all.

LC Chase has again supplied us with an outstanding cover, perfect for the man and  his story inside.

Books in the Hell or High Water series in the order they should be read: