ScatteredThoughtsandRogueWords is so happy to have J.L. Merrow with us today to talk about her latest release, It’s All Geek To Me!

Holding out for a hero 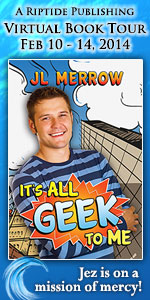 Hi, I’m JL (Jamie) Merrow, and I’m here today as part of the  “It’s All Geek to Me blog tour. It’s great to be here on Scattered Thoughts & Rogue Words.

Giveaway: all commenters on the blog tour will be entered into a draw to win an ebook of their choice from my backlist, plus a $10 Amazon gift certificate. A winner will be chosen randomly on Monday, 17th February, 2014. Good luck!

Today, I want to talk about superheroes.

They roll up, capes billowing dramatically in the wind (or not, if they’ve watched The Incredibles) and save the day with their superpowered abilities.

The first superheroes, if we take the term to mean “masked, costumed fighter for justice” were, arguably, The Scarlet Pimpernel (1903) and Zorro (1919). It wasn’t until the advent of Superman (1938), however, that superheroes were truly “super” – ie, with powers/abilities beyond those of ordinary humans.

Nowadays, there are a whole host of superheroes—some with superpowers conferred on them by various means, such as lab accident, alien origin, or good old-fashioned magic, and some who rely on fiendishly clever technology to gain the upper hand. Some, like Hawkeye in the Avengers, are Just That Good.

When I was writing It’s All Geek to Me, I had to make a decision early on. Jez and Rhys talk about several superheroes—so would they be “real” ones, from Marvel or DC canon and the like, or would I make up my own?

Which turned out to be not a decision at all. Make up my own superheroes? I was on that like white on rice. That stuff is fun. But it turns out, it’s not as easy as you’d think, at least if your knowledge of superheroes comes mostly from the ones who’ve appeared in movies and on TV. I had to discard several first attempts after Googling them and finding they’d already been done. I eventually came up with the following:

The Amazing Translucio: this is the guy Jez and Rhys initially bond over. I was aiming for someone with a daft non-power and it struck me that the ability to turn not invisible, but translucent, would be pretty naff.

Arachnogirl: no prizes for guessing where I got that idea from. She may or may not be a comment on the tradition of viewing female superheroes with the adolescent male gaze (As a geek friend said: “You’ve captured the most important female superpower: breasts.)

There are a few others in the story, too, with more or less recognisable antecedents. But I think I’ll let you find out about those for yourselves. 😉

Question: Do you have a favourite superhero? What is it you particularly love about him/her?

Or is there a superhero who doesn’t exist (what do you mean, none of them actually exist? Of course they do!) but you wish did? Come to that, if you were a superhero, who would you be?
***
JL Merrow is that rare beast, an English person who refuses to drink tea. She writes across genres, with a preference for contemporary gay romance, and is frequently accused of humour. Her novel Slam! won the 2013 Rainbow Award for Best LGBT Romantic Comedy. 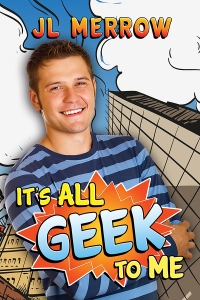 It’s All Geek to Me

Jez is on a mission of mercy: to replace a tragically deceased comic book for his injured best mate, Tel. Venturing into the temple of geekdom itself, the Hidden Asteroid bookstore in London, Jez is bowled over by the guy behind the counter.

Rhys is the poster boy for hot geeks: tall, gorgeous, and totally cool. Jez is desperate to impress Rhys, but lacking in confidence after a bad break-up, so he bluffs his way through the comic book jargon—then dashes back to the hospital to beg Tel to teach him how to speak Geek.

Tel’s happy to oblige, and Jez is over the moon when Rhys asks him out. He’s even more thrilled when they discover a shared love of rugby, something he won’t have to fake for Rhys. The question is, how long can Jez keep up the deception—and what will happen when Rhys realizes he’s going out with Fake Geek Guy?

You can read an excerpt/purchase It’s All Geek to Me at Riptide Publishing.  And don’t forget to leave a comment for the giveaway!