ScatteredThoughtsandRogueWords welcomes Kerry Adrienne to the blog today to talk about her latest story, Artist’s Touch, first story in her new Guild series.  Kerry has brought with her a copy of her book, Beautiful One, to give away. To enter the contest, leave a comment below and an email address where you can be reached.  Contest ends 3/23.

My book, Artist’s Touch, is set in an art guild. I’ve always loved the different media in art—from oil painting to photography, sculpture to metalworking. Creating a guild for my characters gives me a world of techniques to research and explore. I’ve tried many of the things I write about and I love to create art, so the guild definitely was an extension of what I would love in my own life.

Artist’s Touch is the first book in the Guild series. The second book centers around a sculptor in the guild (Sculptor’s Desire) and the third is about a guitarist (Guitarist’s Wish).

I’m really enjoying writing this series—especially since the Guild is located in my favorite city in the world—New York City. I travel there several times a year and I love most everything about it. I’m trying to bring in little bits and pieces into the books I write in hopes that readers who haven’t been able to visit NYC will want to. I love the multicultural vibe and the fast-paced excitement of being around so many people. 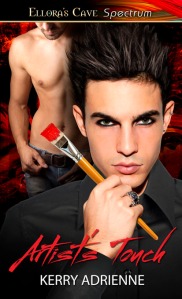 Every starlet wants master painter Kenon Alavi to do her portrait…and more. But Kenon prefers firm to soft and sates his desires with the boyfriends of the women he paints, enjoying the diversity of many lovers but shunning any attachments.

Wallace Harte’s English degree isn’t helping him find a job and working at a bar is the closest he’s gotten to being the Second Coming of Faulkner. Something’s gotta give soon or he’ll be out on the street.

Kenon zeroes in on the bartender at an art exhibition, intending to add him to his long list of conquests, but Wally bolts, initiating a heated game of cat and mouse. Kenon delights in the game until he discovers what Wally is writing. Feeling betrayed, Kenon swears off all entanglements until he reads Wally’s story and discovers true love is sometimes between the pages and not the sheets.

Inside Scoop: This book contains hot, sexy scenes of M/M interaction of an artistic nature. Who knew having your portrait painted could be so hot?

EXCERPT:
By reading any further, you are stating that you are at least 18 years of age. If you are under the age of 18, please exit this site.
An Excerpt From: ARTIST’S TOUCH
Copyright © KERRY ADRIENNE, 2014
All Rights Reserved, Ellora’s Cave Publishing, Inc

About the Author:
Kerry writes about love in its many forms, and enjoys exploring the dynamics of relationships and the quandaries people get themselves into. She lives in suburbia, but is making plans to escape to the ocean and NYC, as both places hold a piece of her heart.

Contest:  Leave a comment and an email address to be entered to win a ebook copy (Kindle, PDF, or Nook) of Beautiful One by Kerry Adrienne.  See book details below. 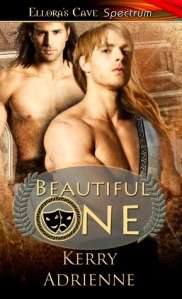 Beautiful One (Available from Ellora’s Cave  )

Kallistos, a shy playwright, has been chosen to compete at the Great Dionysia festival in Athens. His plays are strong, but he faces Sophocles, the man who has won almost every contest. Kallistos, the beautiful one, has eschewed intimacy—yet the dark Alexios pierces his armor with philosophies he’s never considered, and he falls hard.

Alexios, a shepherd, aspires to be an actor in Athens. His trip plunges him into a plot of deceit and lies when Sophocles hires him to sabotage his competition. Sophocles promises money and a part on stage—but challenges Alexios’ beliefs and honour.

Though uncomfortable with the lies, Alexios woos Kallistos, finding himself deeply drawn to the man. As the performances near, Alexios must decide which he wants more—his lover, or his lifelong dream of fame and a career. While Kallistos faces issues of trust and forgiveness, and must ponder where life is truly lived—on stage or in reality.