Scattered Thoughts and Rogue Words is happy to have SE Jakes visiting today to talk about Free Falling, a story in the marvelously addicting Extreme Escapes universe series. 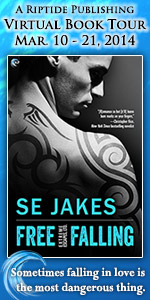 S.E. Jakes:
Thanks so much for having me here today, so I can shout about the fact that Free Falling’s getting a re-release with Riptide! I’m so excited about this, you have no idea. For me, this is the book that started the Hell or High Water series (see below for more on that).

Free Falling originally came out in December of 2012—it was the first book I self-published, and I worked with Sarah Frantz as my editor (and she’s now my Riptide editor as well) and the entire experience was simply awesome.

This would also be the second book Prophet inserted himself into (the first was Bound For Keeps). It was then I realized that the man needed his own series or else he would show up in every single book I wrote. But for Free Falling, it certainly cemented the bond between Blue and Prophet. I’ve brought Blue and Mick back in Long Time Gone (Hell or High Water 2) and yes, I’m totally planning a Free Falling sequel, which would happen sometime post Dirty Love (Dirty Deeds 3). Because I can’t get enough of Blue, my favorite thief, and Mick, the man who’ll chase him every single time.

The great thing about moving this book to Riptide is that now all my EE Ltd. books are in one place AND Free Falling will now be available everywhere in eFormat AND in print!!! The cover looks gorgeous in person.

,
Contest:
Every comment on this blog tour enters you in a drawing to win one of three SIGNED copies of Hell or High Water series: Catch a Ghost and Long Time Gone. Entries close at midnight, Eastern Time, on March 24th, and winners will be announced on March 25th.  Contest is valid worldwide.

Sometimes falling in love is the most dangerous thing of all.
**

Blue is a thief who lives for adrenaline and danger. And when he meets Mick, a mercenary, he’s hit with a buzz of attraction like the rush of a high-rise job without a safety rope. But after making plans to get together, Mick leaves him hanging, and Blue vows never again.
A year later, Mick watches helplessly as Blue stumbles into the middle of one of Mick’s jobs. Risking his cover and their lives, Mick saves Blue and cares for him as he recuperates, but neither man has any idea how to handle the intimacy this forces them into.
Once Blue is safe, Mick redoubles his efforts to take down the drug lord responsible—and disappears. Blue goes after him, determined to return the favor and rescue the man he loves, no matter the cost.
This is a revised second edition of the originally self-published title. No substantive changes have been made to the story.
About SE Jakes:
SE Jakes writes m/m romance. She believes in happy endings and fighting for what you want in both fiction and real life.
She lives in New York with her family, and most days, she can be found happily writing (in bed). No really…