ScatteredThoughtsandRogueWords is happy to host Riptide Publishing’s Aleksandr Voinov and L.A. Witt Hostile Ground Book Tour.  Comments will automatically enter you in the drawing for a choice of 2 eBooks off the authors backlists.  Details are listed below.

Welcome to the Riptide Publishing/Aleksandr Voinov/L. A. Witt blog tour for our thriller, Hostile Ground!

Contest: Every comment on this blog tour enters you in a drawing for a choice of two eBooks off our backlists (excluding Hostile Ground) and a $10 Riptide Publishing store credit. Entries close at midnight, Eastern time, on May 17th, and winners will be announced on May 19th. Contest is NOT restricted to U.S. entries. 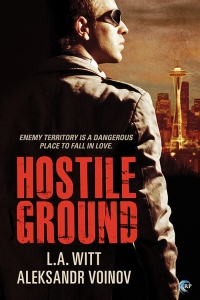 Hostile Ground:
Enemy territory is a dangerous place to fall in love.

After the deaths of three undercover cops investigating a drug ring in a seedy strip club in Seattle, Detective Mahir Hussain has been sent to finish the job. He joins the club’s security team in the hopes of finding enough evidence to bust the operation before the men in charge find a reason to put him in a shallow grave.

To protect the strippers, only gay men can work the club. Ridley, the cold and intimidating head of security, knows exactly how to test potential new hires—including Mahir. From the minute they meet, Mahir and Ridley engage in a dangerous dance of sex and mind games. Mahir needs to find his evidence before Ridley figures out he’s a cop—and before they both grow too close to betray one another.

As the game goes on, Mahir burrows deeper into the operation, where he learns there’s much more happening than meets the eye . . . and why every cop who made it this far has been silenced with a bullet.

Hostile Ground is available May 12th from Riptide Publishing.

Aleksandr Voinov: Aleksandr has been published for twenty years, both in print and ebook. He has ten years’ experience as a writing coach, book doctor, and writing teacher, and until recently worked as an editor in financial services.

After co-authoring the M/M military cult classic Special Forces, Aleksandr embarked on a quest to write gritty, edgy, sometimes literary M/M and gay fiction (much of which is romance/erotica)—the only way he can use his American Literature degree these days.

He’s been published with Heyne/Random House, Carina Press, Samhain Publishing, and others, and is an EPIC Awards winner and a Lambda Awards finalist.

L.A. Witt: L.A. Witt is an abnormal M/M romance writer currently living in the glamorous and ultra-futuristic metropolis of Omaha, Nebraska, with her husband, two cats, and a disembodied penguin brain that communicates with her telepathically. In addition to writing smut and disturbing the locals, L.A. is said to be working with the US government to perfect a genetic modification that will allow humans to survive indefinitely on Corn Pops and beef jerky. This is all a cover, though, as her primary leisure activity is hunting down her arch nemesis, erotica author Lauren Gallagher, who is also said to be lurking somewhere in Omaha.

L. A.’s backlist is available on her website, and updates (as well as random thoughts and the odd snarky comment) can be found on her blog or on Twitter (@GallagherWitt).

Contest: Every comment on this blog tour enters you in a drawing for a choice of two eBooks off our backlists (excluding Hostile Ground) and a $10 Riptide Publishing store credit. Entries close at midnight, Eastern time, on May 17th, and winners will be announced on May 19th. Contest is NOT restricted to U.S. entries.  Leave a comment and/or use the Rafflecopter link below.