Tommy O’Shea is raising his seven younger brothers and sisters the best he can under the worst of circumstances. With an alcoholic, drug addicted father and stepmother to contend with, only the fact that the house they live in was their grandmother’s keeps a roof over their heads.  The money needed for food and other living expenses is cobbled together by a collection of part time jobs, petty thefts and other desperate measures.  This includes selling sexual favors in alleys to get by.  And it’s been that way since Tommy was 15. Here living on the edge is razor sharp, pain is common place and despairs its companion. Between trying to make sure his brothers and sisters are fed, attend school, and stay out of the foster care system, Tommy has room for little else in his life, including a relationship.

Police officer Bobby McAlister has known Tommy and his family since they were kids. Unbeknownst to Tommy he has been trying to keep an eye out for their safety.  A chance meeting with Tommy gives Bobby a chance to help out while trying to strike up a friendship once more.  But Tommy has erected a wall of anger, diffidence and shame to keep others away and he tries to do the same with Bobby. Bobby sees how desperate the situation has become and refuses to be pushed away and a tentative friendship and relationship is formed.

A shattering event tests the fragile bonds that has formed between Tommy, Bobby and Tommy’s family.  Will they be strong enough to withstand the tragedy that befalls the O’Shea family, or will all be lost forever under the aftermath?

The Last Thing He Needs by J. H. Knight is that story that slips along the edges of what could have been a Lifetime movie yet surmounts that overwrought template to become a deeply moving and emotionally wrenching story of family and love.  J. H. Knight is another new author and a terrific one if this story is any indication.  I have to admit I approached this story from two very different viewpoints.  One, the side of me that’s addicted to those Christmas Hallmark movies, and the other side?  That’s the one that looks at life through George Carlin glasses.  The blurb hooked me in while my suspicious nature said to beware the maudlin elements that could have made this a manipulative sob fest.

I shouldn’t have worried.  Knight took all the suspect elements, the impoverished family, the kids in danger, the drug addled parents…all of it and made it believable and heartrending. It all starts with Tommy O’Shea for he is the anchor of his family and for this story.  If Tommy had not come across as real as he does, this would be a very different novel.  But Knight makes us believe in Tommy.  In his anger, and pain, and desperation.  The descriptions of the O’Shea family’s living conditions ring in as authentic and gritty.  The condition of the house, exterior and interior rooms, reads as desperation,especially the bedroom crammed with bodies. The teenagers shouldering burdens they were never meant to cope with, young kids on the edge of delinquency but for reasons that make your heart break, and the toddlers unaware of how shaky is the foundation their family rests on.  Knight has a clear enough idea of the reality of poor families these days to make the O’Shea family existence spare, gritty and desperate without coating it in dramatic prose and imagery.  It’s a grim life and Knight depicts it as such.

Bobby McAlister comes from a very different background.  The only son of two loving parents, the loss of his father has left Bobby and his mother trying to cope with the hole in their lives and a future without the man they both loved deeply.  His life and upbringing could not be any more different and the manner in which Tommy and the kids are living is almost too much for Bobby to comprehend, even as a police officer.  His emotional and familial solidity is the bulwark Tommy needs for himself and for his brothers and sisters against the reality their lives have become.  Bobby isn’t perfect and that just pulls us into his personality even further.  Then add to that his grieving mother, Judy, and our love for the McAlister family just grows and grows.

All the characters here managed to be fleshed out to a level that enables the reader to believe in them too.  Tommy’s father and step mother are characters whose addictions and behaviors are heinous yet Knight is careful to show that Cal and step mother Cheryl were once so very different from the people they are now after years of substance abuse, bad decisions, and parental neglect has made them.  Life is choices and sometimes it only takes a slip or a push for you to go one way or the way.  Or in Tommy’s case, realize that to ask and accept help when you need it does not have to be dangerous or belittling.

Knight is quick not to deliver any easy answers for a desperate and painful situation.  Tommy’s life and that of his siblings remain precarious for most of the story.  But the resolution, while slow to arrive, is ultimately satisfying and emotionally heartwarming.  This story and its characters earns its ending.  It’s wonderful and realistic.  And it puts J.H. Knight squarely on my must read list.  I think after reading this story you will find yourself doing the same.  Consider this highly recommended by Scattered Thoughts and Rogue Words.

Cover art by AngstyG.  I like the cover but its lacking a little something in design.

The Last Thing He Needs

Contest:  An eBook copy of Most Beautiful Words when it is released.  Must be 18 years of age or older to enter.  Use this Rafflecopter link to enter and for more contest details. 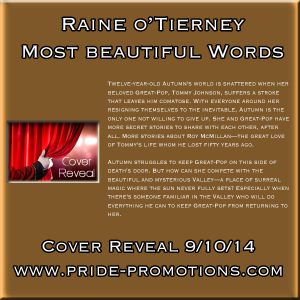 Raine O’Tierney lives outside of Kansas City with her husband, fellow Dreamspinner Press author, Siôn O’Tierney. When she’s not writing, she’s either asleep, or fighting the good fight for intellectual freedom at her library day job. Raine believes the best thing we can do in life is be kind to one another, and she enjoys encouraging fellow writers. Writing for 20+ years (with the last 10 spent on M/M) Raine changes sub-genres to suit her mood and believes all good stories end sweetly. Contact her if you’re interested in talking about point-and-click adventure games or about which dachshunds are the best kinds of dachshunds!

Blurb:
Twelve-year-old Autumn’s world is shattered when her beloved Great-Pop, Tommy Johnson, suffers a stroke that leaves him comatose. With everyone around her resigning themselves to the inevitable, Autumn is the only one not willing to give up. She and Great-Pop have more secret stories to share with each other, after all. More stories about Roy McMillan—the great love of Tommy’s life whom he lost fifty years ago.
Autumn struggles to keep Great-Pop on this side of death’s door. But how can she compete with the beautiful and mysterious Valley—a place of surreal magic where the sun never fully sets? Especially when there’s someone familiar in the Valley who will do everything he can to keep Great-Pop from returning to her.

“I’m gonna let you kiss me,” Roy said with a big, devious smile.

“Yeah?” Tommy asked, thinking he was being put on. “All right, I guess I’ll take the consolation prize then.”

“That leaves me with the grand prize by default.”

And he leaned in, and as sweet as anything Tommy had experienced in his whole life, Roy kissed his slightly parted lips. Even when Tommy stiffened, Roy did not pull back. Instead, slowly and deliberately, he gathered Tommy to him with a hold that was loose enough for him to escape from, but tight enough to be a real, romantic embrace. He kissed Tommy until he had to draw breath, and even then he did not let him go all the way.

“You… really wanted to?” Tommy asked, his head spinning. In that moment he had a single, solitary regret. It wasn’t coming out here to shoot arrows, and it wasn’t that he hadn’t pulled out of Roy’s embrace or even that he’d been kissed. It was that he hadn’t kissed Roy first. Because Tommy liked the kissing. A lot. And he wanted to do it more.