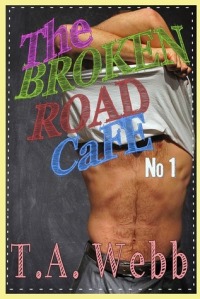 For years Daniel O’Leary worked hard to have it all.  Determination and a ruthless focus on his goals saw him  through college, law school and a job at a prestigious law firm where he made partner in a meteoric rise to the top.  All before the age of 35.  Along the way he remained close to his college best friend and found  love with an artist.  Now 10 years later, Dan has been feeling unsettled, as if having everything he wanted was not enough.    The fates heard him and in one day time, Dan lost everything.  His lover, his best friend and his job and partnership at the law  firm.

Vowing to use the shocking events of the day as a springboard to something new, Dan heads out to a small town near Stone Mountain, Georgia.  From the moment Dan steps into the town of Blue Ridge, he feels free and at home.  A new life beckons with the purchase of a local cafe,  which Dan renamed The Broken Road Cafe.  Blue Ridge’s  Sheriff, Nick Oliver,  is gorgeous, irritating, and also deep in the closet.  Surprisingly (or not) Dan finds himself falling for the Sheriff, the town’s people and life lived at a slower pace.

But people and problems have a way of refusing to be left behind as Dan learns to his dismay.  Dan wants a new start, a new life and perhaps even a new love. Now If only Dan’s his past will let him go forward into his future.

How do I love this story?  Let me count the ways!  The  outstanding characters, the intimate location and settings, the humor and of course, the wonderful plot…all courtesy of T.A. Webb, a masterful storyteller at it again with this latest release and new series.  T.A. Webb is an automatic must read, must have author for me.  And this new story, The Broken Road Cafe is a shining example why he should be yours as well.

Starting with one of the main characters,  Daniel O’Leary, Webb pulls us into the mind and life of this intelligent, moral, if somewhat ruthless lawyer, a man who worked relentlessly through the years to obtain his law degree,  earn a stellar reputation as a lawyer, and partnership  by the age of 35 at one of the most prestigious law firms in Atlanta.  His support consists of his amazing assistant, Charity, George his best friend of 20 years and George’s partner and not much else.  Oh, and his live in love too.  The author brings Dan’s emotional and mental state alive on the pages as Dan muses over his recent irritability with his job and life.  Still, Dan is going through his normal routine, when a moment of spontaneity and surprises start the avalanche that will destroy Dan’s life in just one day.   Webb makes us feel every shocking moment of every minute of the events that break up Dan’s life and perceptions of the people around him.  It’s raw, and painful, and sobering.

Then as Dan begins to gather the courage to move away and go forward, we are next to him in the passenger seat of his beloved Mustang as he heads out of Atlanta and finds himself in the small town of Blue Ridge, a place that will change his life as it works itself into our hearts.  T.A. Webb knows small town life and its all here, the pluses and the minuses, the intimacy for good and bad.  And its exactly what Dan needs.  What a believable journey this becomes for Dan and the reader.  It’s full of humor, self depreciation, wise cracks and the caring the pops up when you least expect it but need it the most.  I heart this town and its people.  And it rings with an authenticity that anyone who lives in or is familiar with small towns, especially those in the South will recognize.

Another huge piece of this heartwarming, complex story is town Sheriff Nick Oliver.  Nick is the town’s “hero”, that one person who is the town’s moral compass and go to guy no matter what the crisis.He is also just happens to be hiding the fact that he’s gay.  From everyone, including his huge and loving family.  One initial encounter with Dan upsets Nick’s carefully crafted status quo.  As you can imagine, any relationship between a man proud to be out and gay with someone deep in the closet is one strewn with problems, arguments, and adjustments. Especially as each man has erected their own barriers against love and another relationship.  It’s a marvelous dance that will ensure that the reader enjoys it almost as much as the men involved.

But it’s not just the dynamics between Nick and Dan, but all the other towns people as well that draws the reader in.  The Mayor of Blue Ridge and local real estate goddess, Patsy, is as warm, intelligent and complex character as Charity, the wry, brilliant, and scary personal assistant. I love it when the female characters are as well written and deeply layered as the men.  And with these two gems, the reader has two strong women to fall in love with as they add luster and depth to each scene they appear in.  In fact, this story and series is chock full of delights, in characters, plot surprises and a dialog that  snaps and sizzles with the verbal sparring southerners are so  good at.

I highly recommend The Broken Heart Cafe to all readers, lovers of romance, crystalline characterizations and a addicting setting that will have you wanting to make travel arrangements.  T.A. Webb’s title came from a well known country song, “God Bless The Broken Road”:

“Others who broke my heart, they were like northern stars

Its so perfect for the story, for the characters, and for this series that works its way into heart to stay.  Pick it up and begin your journey to Blue Ridge, Georgia and The Broken Road Cafe.

Cover art by Laura E. Harner.  Sexy, hot, but I miss a sense of location and characters.

The Broken Road Cafe series to date in the order they were written and should be read: