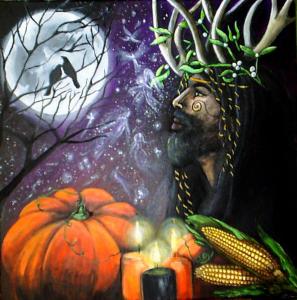 October 31st is almost upon us. Known by many names, this time of year is celebrated by people all over the world and in far different ways than we might imagine.  A little history first.  Known first as Samhain (pronounced Sa win or sow en depending upon which Celtic dialect you use), it is an ancient Celtic festival celebrated from sunset on October 31 to sunset on November 1. This date  falls about halfway between the autumn equinox and the winter solstice. The festival marks the end of summer and fall (harvest season) and the beginning of winter, the darker, colder half of the year.

During Samhain, people bring their livestock down from the upper grazing pastures.  Now was the time of separating the animals, choosing which to keep as breeding stock and which to choose for slaughter for winter. Households take careful stock of their pantries and food supplies in order to prepare for the long, cold weather ahead. Unlike the Gaelic festival of Beltane, which celebrates life and growth, Samhain honors the darker side of things.  These months are considered a “liminal” time of the year, passing from the abundance of summer into the darkness and harsh times of the winter. It is also thought to be the time of the year when the walls between our world and the next plane of existence thin and the spirits can reach out to the living.

It is believed that the deceased spirits would return to the homes and places they knew, seeking comfort and sometimes revenge.  In order to appease these spirits, people would place a dinner plate at their table and/or bowls of food or treats by their front door. People took special care not to offend any wandering spirits, and if they left their homes they would disguise themselves with masks and costumes to avoid recognition. Eventually the tables were turned, and the masked citizens started imitating the spirits they once feared by going door-to-door demanding treats and threatening to perform mischief of their own.

Into this celebration came large bonfires,  lit to keep away bad spirits and even act as an imitation sun.  The bones from  freshly slaughtered animals were tossed into the fires known as “bone-fires”, which eventually became bonfires.  People carried part of the bone-fires with them by placing a hot coal inside a hollowed-out turnip, potato or beet.  Yes, that’s where our jack ‘o lanterns came from.   According to lore and historian Hannah Kincaid*:

The lanterns were frequently carved with creepy faces to represent and scare away the wandering spirits. The term “jack-o’-lantern” comes from an old Irish myth about a man nicknamed “Stingy Jack.” According to lore, the drunkard Stingy Jack tricked the devil into never condemning him to Hell. When Jack died, however, God wouldn’t allow such an unsavory soul into heaven, either, so Jack was sentenced to eternally wander the Earth with nothing but a coal nestled inside a hollowed-out-turnip for light. The Irish referred to Stingy Jack’s

ghost as “Jack of the Lantern,” which eventually became “jack-o’-lantern” as we know it today.

So how did Samhain become Halloween?  Blame it on the Church…the Catholic church that is.  Here is the best explanation courtesy of Hannah Kincaid again:

The term “Halloween” is a result of Catholic interference with Samhain in the year 609. All Saints Day is a Roman Catholic holiday that honors and remembers all Christian saints both known and unknown. Pope Gregory IV decided to officially move the date of All Saints Day to November 1, the same day as Samhain. All Saints Day is also called “All Hallows” because “hallowed” means sanctified or holy (for those of you who know The Our Father prayer, think of the part “hallowed be thy name.”) The evening before All Hallows was a popular time to celebrate, so the term “All Hallows’ Eve” was used quite a bit. Eventually the term All Hallows’ Eve morphed into Halloween as we know it, and along the way it snatched up and mingled with many of the Samhain traditions that had already been happening for thousands of years.

The history of Samhain reminds us that we once celebrated holidays because of a shared human connection that resonated with the Earth’s cycles — the weather, the moon, the harvest — instead of a celebration of consumerism or heroic dominance.*

So how do you intend to spend this All Hallows Eve?  Masked, costumed, ready to explore into the night and see what spirits are afoot?  Or will you be staying home, listening for the sound of footsteps big and small, the sound of giggling and howls upon the night air?   Do you have your candy ready or will there be a trick or two in store for those who venture near?  Me and mine will light a candle or two, keep the wee doggies inside safe and warm, and have the goodies ready to share for those who visit.  Happy Samhain, everyone!

Now for the Week Ahead at Scattered Thoughts and Rogue Words: