Introducing into Center Ring, Cornelia Grey and The Circus of the Damned!

Cornelia Grey is here to tell us about the chracter inspiration for the supporting folks in her captivatingly scary new story, The Circus of the Damned.  And don’t forget to follow along on the tour for more chances to win a $250 gift certificated to Harlots and Angels Steampunk Corsetry!   Take a look at these items that could be yours if you won!

The Circus of the Damned – Character Inspiration Pics Pt. II

Hello, everyone! Thank you so much for having me – happy to join you to talk a bit about my newest release, the paranormal novel The Circus of the Damned!

I love supporting characters, love making them interesting and colorful and, with the circus setting, I was really looking forward to working with an ensemble cast. My characters tend to be underdogs, living at the margins of society, relying on their wit and abilities to scrape by in a hostile world, and the perforrmers of the Circus of the Damned are just that – a ragtag crew of odd creatures, people with supernatural abilities that they cannot reveal to the world, hiding in plain sight under a circus tent…

As I was toying with a few ideas about their ideas and their performances, I decided to look for inspiration browsing vintage photos and cabinet cards of acrobats and assorted artists, that would be a perfect match with the Victorian-esque, slightly creepy atmosphere I had in mind… while I didn’t have much luck finding photos matching my guy performers, let me introduce you to the ladies of the Circus of the Damned!

First, I knew I wanted a strong woman, who would be beautiful and confident and unstoppable, with a taste for elegant earrings and dainty plumed hats… and I came across this gorgeous lady, who instantly became my Constance!

Then, I wanted an aerialist – slash – contortionist, who would swing from the trapeze and stroll around on stilts. This young lady was a good inspiration for Miriam…

When I came across this elegant woman, instead, the opposite thing happened – I was captured by her expression, her posture, her dress, and instantly knew

she had to belong to the Circus of the Damned, and set about discovering just who she might be. By the time we meet her at the Circus, Dora is elderly, but she is still just as intriguing and magnetic as she does in this picture…

The same happened when I stumbled across the picture of this young acrobat: I was instantly struck. I had been struggling, trying to zero in on the character of Olivia and on what her performance would be like and, when I saw this girl – with her curls, and her piercing, knowing eyes – I knew I had found her. 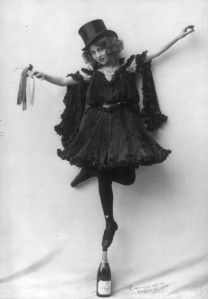 And, last but not least, a character that has already made a brief appearance in another of my stories (you win a cookie if you recognise which one!). I am fond of scattering ‘Easter eggs’ here and there in my books – subtle references to another story, for example, or maybe a song… and Ramona’s appearance is one! There was no chance to talk about her backstory in this book, but she

is from Genoa, Italy. Give her some basil and percorino cheese, and she will prepare a mean pesto sauce!

If you’d like to see some more inspiration pics – for the setting of the Circus itself, and the general atmosphere I had in mind for the story, you can check the Circus of the Damned board on Pinterest!

And speaking of atmosphere, I will be chatting about the music that inspired me in my next stop on the Gaslamp Fortnight tour!

If you’d like to see some more inspiration pics – for the setting of the Circus itself, and the general atmosphere I had in mind for the story, you can check the Circus of the Damned board on Pinterest!

And speaking of atmosphere, I will be chatting about the music that inspired me in my next stop on the Gaslamp Fortnight tour!

Now onto the story details from Cornelia Grey and The Circus of the Damned available for preorder now!

The Circus of the Damned Blurb:

Magician Gilbert Blake has spent his entire life conning drunkards in the seediest pubs in the darkest towns, careful to hide the true depths of his power. But when he spends a little too much time in Shadowsea and the infamous slumlord Count Reuben gets wind of his abilities, hiding within the Circus of the Damned may be Gilbert’s only chance at survival.

But there’s more to the Circus than meets the eye. Every time a performer dies, a new one must take his place, or the entire circus suffers the consequences. And while the handsome ringmaster Jesse isn’t one to coerce unwilling performers into giving up their souls to the devil, a recent death in their ranks makes Gilbert exactly what they need.

Yet the longer Gilbert stays with the Circus, the more danger he seems to bring them. Being with Jesse is more than Gilbert could have hoped for, but as Count Reuben’s men continue to search for Gilbert and the Circus loses another performer, they all face running out of time long before the Devil claims his due.

This title is part of the A Deal with a Devil universe.  Read an excerpt here.

8 thoughts on “It’s Hellish Great Times on Tour with Cornelia Grey and The Circus of the Damned !(contest)”