“Beware the Ides of March!” 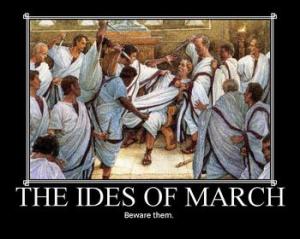 March 15 is the Ides of March!  Most people think of Julius Caesar who was famously warned by a soothsayer “Beware the ides of March!”.  And we all know how  that turned out!  But before Caesar so unfortunately helped make it famous, March 15-the Ides of March- was just another day on the calendar! It all actually started much  earlier in Roman history, long before Caesar.  Romulus (the supposed founder of Rome) is also said to have  invented the Roman calendar.  The Ides of March was just another way of saying March 15 (no hint of foreboding was linked to it at the time).

The calendar went something like this- Ides of March http://www.infoplease.com/spot/ides1.html#ixzz3UNnMrzj1:

The Roman calendar organized its months around three days, each of which served as a reference point for counting the other days:

Days in March
March 1: Kalends;
March 2: VI Nones;
March 3: V Nones;
March 4: IV Nones;
March 5: III Nones;
March 6: Pridie Nones (Latin for “on the day before”);
March 7: Nones;
March 15: Ides
Used in the first Roman calendar as well as in the Julian calendar (established by Julius Caesar in 45 B.C.E.) the confusing system of Kalends, Nones, and Ides continued to be used to varying degrees throughout the Middle Ages and into the Renaissance.

There were also some religious festivals also associated with this time, including the festival of Anna Perenna, sister to the tragic Carthaginian queen Dido.  Dido was immortalized in Ovid’s masterpiece “Metamorphosis” as well as from Virgil’s Aeneid.  Look them up when you have some time. 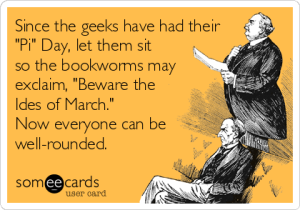 For a few  more facts, neat and weird see the link below.

The Smithsonian has a link where they listed 10 events of import that happened on March 15.  While I agree most are calamitous (acts of war, major weather events), I’m not quite sure that the cancellation of the Ed Sullivan show on March 15 1971 should be listed among their ranks. It must have, at least to the person who made the list.

Schedule This Week At Scattered Thoughts and Rogue Words