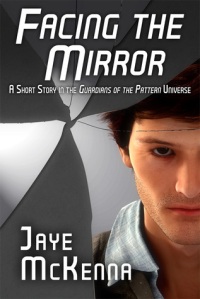 Special Agent Cameron Asada has spent four years undercover in an attempt to bring down a large drug cartel the Sapphire Guild. The things he’s been forced to do in order to maintain his cover are weighing heavily on his soul, and Cam is beginning to have trouble facing the man he now sees in his mirror.

Cam finally has the opportunity to get what he’s been striving for the last four years, working for the boss himself. There Cam meets Miko, the boss’s beautiful slave whom he uses to reward his associates for jobs well done. Miko is a psion who does not speak, but he is very loud in Cam’s head when he’s hurt/used. Can Cam ignore the young psion’s pain and keep to his mission? And who is the mysterious, powerful and quirky Draven? Friend or foe?

A well-written free short that acts as a prologue or prequel to the series. This introduces many interesting characters who are key players in the Guardians of the Pattern series, which I highly recommend. When I first read this short, I hadn’t explored this author much or the rest of the series. Months later, after reading other books and finally picking up book #1 of this series, I found myself compelled to go back and read this on again. Now that I wasn’t expecting it to be a complete romance in itself, I came away with a much different feel for the story. Read alone, I rated this as a 4 star story and wrote this: “I was most intrigued by Draven and Miko and would like to learn more about them. This particular short story wasn’t actually a romance and was quite dark. But intriguing.”  After reading book one and meeting Cameron and Miko again under different circumstances, I have a better understanding and insight that lends an extra depth to the story. I re-read it specifically seeking to refresh that background, of these two.

What I hadn’t expected was how much more I noticed than on the first read… and how very, very much I need to read more about the mysterious Draven.

This isn’t a romance and it isn’t a sweet story. Its dark and there is non-con. But it is a tightly woven, intense short story with excellent characterization, mystery, action, and world-building. Rare to see a short capture all that so well. For that reason, I re-rated this to 4.5 rounded up. I love the title, too.

The cover by Cinchbug shows a man looking into a cracked mirror. The haunted stare of the man seriously creeps me out, which is the point because the man is seeing himself slowly turning into a monster. 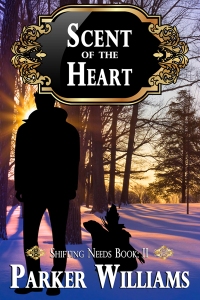 Scent of the Heart (Shifting Needs #2) by Parker Williams
Series should be read in order
Release Date: June 15, 2015

-Our Interview with Parker Williams-

We are happy to have Parker Williams here today to talk a little about the allure of writing shifters and romance.

Parker, why do you love to write about shifters?

Parker Williams: I love shifters. They’re powerful. They’re quick. They heal fast. But they also find that special someone who completes them, and a bond forms, putting them together for life. To me that’s the ultimate love story, and usually one of them is definitely in charge in the relationship. I do love alpha characters.

My favorite shifter series is from Silvia Violet. She gives me so many goose bumps from he way she writes them. No matter how powerful, they always have a weak spot, some chink in their armor that people can exploit, but they also are the ones who step up to save the day.

When I decided to try my hand at a shifter story, I wanted to do something a little different. In my world, only a human can be the Alpha, because only a human has no allegiance to one shifter race over another, so he can decide fair and impartially. That’s where Zak came in. He’d been groomed for the job since he was a child, having sacrificed many aspects of his life, because his guardians told him that one day he would need to know all these things.

But Jake… Oh gods, I loved Jake. He wasn’t sure what was happening to him when he smelled that delightful aroma that was Zak. Jake didn’t know what a shifter was, didn’t even believe such a thing was possible, but after he scented his mate, his body began to change.

I think that’s what I like best about it. In my world, shifters are two souls who share one body. They’re aware of each other, but each has their own needs. Jake is the exception. His jaguar is an essential part of him, and his mind is in control while he’s in the jaguar’s body.

But for those who never gave a shifter book a chance, pick one up. If you like powerful alpha men, you may very well find yourself fin love with shifters, too.

Thank you, Parker…now more about Scent of the Heart.

Casey Scott grew up being told he’d never amount to anything, and despite the unwavering
love and support from his best friend, Jake, the idea sticks in the back of Casey’s mind. When he
discovers he has a unique destiny in an enclave where shifters and humans live together, he
seizes the chance, wanting for once in his life to be someone special.

Tsvetok Yerokhin lost his parents to the evil ruler of the enclave when he was a boy. The
responsibilities of raising his two younger brothers nearly overwhelmed him and self-doubt
took over. When the new Alpha and his Protector arrive in time to save his life, Sev is grateful,
but he’s even more shocked when he scents his mate with them.

Casey isn’t prepared for the feelings that sweep over him when he meets Sev, but he refuses to
act on them because he’s straight. Still, there is something so alluring about Sev that Casey can’t
help being drawn to him.

As the two explore the edges of their new discovery, an evil returns, determined to control the
enclave or destroy it. The Alpha and Protector are powerless to stop it, but Casey holds the key
to victory. If he can discover what it is, he has a chance to save them all. To be the hero.

Unfortunately, the hero has to be willing to make the ultimate sacrifice, and for Casey that
means losing his heart.

“This night is shot,” Casey mumbled. “Hakii, if you’re there, I’m sorry. I need to find him. I’ll try to be back as soon as I can. Oh, and if you’re not there, I hope you’re getting a damn good laugh at me talking to myself.”
The night air had chilled considerably. Casey threw on a sweater and hurried to the Alpha’s house. Before he could pound on the door, it swung open. Jake stood there wearing nothing at all.
“Oh god, my eyes.”
Jake sighed. “You’ve seen me before. A lot, if I recall correctly.”
“And every time I do, I remember that I need to create eye bleach.”
Jake faked a laugh. “Yeah, you’re hilarious. What do you want?”
“A guy came to my house tonight. His name is Sev, and I think he’s in trouble.”
All humor fled from Jake’s face. “What happened?”
Casey told him about the visit. “He…called me his mate. What the hell is that about?”
“Later. We’ve got to find him.”
In an instant, Jake transformed into a beautiful black jaguar. Zak came rushing to the door. “What is wrong?”
Before Casey could answer, Zak grabbed a heavy coat and squirmed into it. “Jake will track him. You will come with us.”
“Zak, he called me his mate. Why would he do that?”
“You worry about this now? I do not see where this matters. If you prefer, you may stay behind.”
Casey sobered immediately. “No, you’re right. I’m sorry.”
They tracked Jake as he hurried to the woods. When they heard him roar, Zak and Casey ran to the edge of the forest. Jake had transformed back to his human form and, man, was he pissed.
“Come out here, now,” he demanded.
There was no movement, but Casey heard a clicking noise, followed by the familiar stamping of feet.
“You spray me and I swear to the gods I will neuter you. Put your damn tail down and face us as a man, Sev.”

Parker Williams believes that true love exists, but it always comes with a price. No happily ever after can ever be had without work, sweat, and tears that come with melding lives together.
Living in Milwaukee, Wisconsin, Parker held his job for nearly 28 years before he decided to retire and try new things. He enjoys his new life as a stay-at-home author and also working on Pride-Promotions, an LGBT author promotion service.

Enter to win a Rafflecopter Prize: $25 gift card and a skunk Beanie Baby. You must be 18 years of age or older to enter. Link and prizes provided by the author and Pride Promotions. 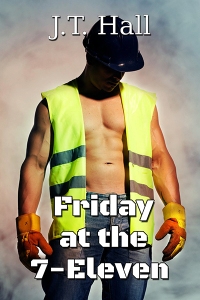 Brent’s a bully who picks on his workmate Alex. What Brent doesn’t realize, however, is that Alex wants him, but is too scared to ask. Meanwhile Brent’s convinced that all he needs is a firm hand to push him down and force him to be a good guy.

Then he meets Craig, a muscled veteran working at the local 7-Eleven. Craig knows a switch when he sees it, and Brent’s got it written all over him. He needs a hard takedown and some training to harness that sadistic side. Craig decides that what might be best is for all three of them to get together. Only by embracing honesty and self-control can each of them find what they need. 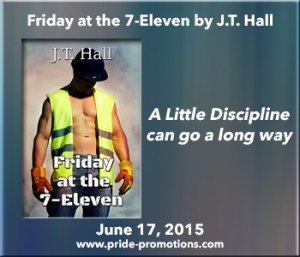 Craig couldn’t help but chuckle, as the day’s events unfolded.

He’d had his eye on Brent for some time—weeks, in fact. Six feet tall with light brown hair in a neat cropped style, muscles that advertised his time at the gym, and gorgeous blue eyes. What was there not to notice? The guy scowled a lot, though, and moved with a jerky, decisive style. Brent was a guy used to giving orders, and he wasn’t happy about it.

Craig had known Brent would love taking orders. Yet, it had to be from somebody with the power and the balls to back it up.
Happily, fifteen years as a Marine had given him that power.

As he cleaned up around the drinking fountain and the snack area, Craig grinned, recalling the feel of Brent’s mouth on his cock, the way the guy had challenged him, and then ended up begging for release. Brent’s little tagalong had been watching, too.
Younger guy, blond and lean, probably more into running than lifting weights. Obviously a submissive, and pining after someone who might not give a fuck about him. But cute. Very cute.

J.T. Hall has a bachelor degree in Creative Writing and a Master in Education. She has long been active in the LGBT and local leather community and does charity work including AIDS education and suicide prevention. Currently, J.T. works as a technical writer in the healthcare industry and lives with her partner and teenaged daughter in sunny Arizona.

Enter to win a Rafflecopter Prize: E-copy of ‘Friday at the 7-Eleven’. Must be 18 years of age or older. Link and prizes provided by the author and Pride Promotions.