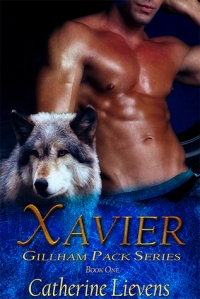 Xavier’s life has gone to hell. He has broken up with his boyfriend. A stalker after his ex has attacked him. Now people change into animals. It’s enough to make one pass out.

Xavier has ended his relationship with Andrew, who is dating someone new. However, a stalker who has taken an obsession with Andy does not know this and attacks Xavier. When friends of Andrew find a job for Xavier in the nearby town of GIllham, Xavier’s world is about to turn upside down. Xavier finds out that not only are Andrew’s friends shape shifters but also the men that he will be working for in Gillham.

Andy is a member of the Gillham pack of wolf shifters. When his alpha and best friend Kameron asks Andy to watch over a man sent by the local cat pride for his protection, Andy reluctantly agrees. When he meets Xavier, he recognizes the man as his mate. Making moves to confirm his suspicions, Andy scares Xavier worse than the stalker that is after his ex Andrew. Making matters worse for Andy is that Xavier wants to talk to his ex for some sort of explanation.

Once mates are explained to Xavier, he goes into a depression since he figures the only reason Andy would want an overweight accountant is because Fate had put them together. Andy assures him that despite the mat e pull that he could walk away if he wanted to do so.

Andy agrees to give Xavier time to settle into the world of the paranormal and mates.

As things begin to settle down for Andy and Xavier, outside forces start to put a strain on their building relationship. Some members of Andy’s family are not happy about him taking a human male as a mate. Also, news about some former pack members who were sold by the former alpha to scientists is brought to the pack’s attention. When Andy returns from the rescue mission, his and Xavier’s lives will be changed.

This is the first book in a new series by Catherine Lievens. The author has incorporated characters from her Whitedell pride series to help kick off this new series. While it would be helpful to have read the Whitedell series to understand some of the overall plotting between the two series, it is not essential. She has set up the scene for future books especially that of Kameron, the wolf pack alpha and Zach. I believe that Zach’s refusal to mate with Kam has something to do with the scientists or associates of the former alpha. I look forward to seeing how this series progresses, especially with Zach.

The cover art by Latrisha Waters shows a build man who I assume is Andy and his wolf. It is a good cover except that the man doesn’t quite match the description of Andy. It is noted that Andy is tattooed and pierced and those could be seen from his work clothes. The man on the cover has neither that I can see. It is a small quibble on my part.