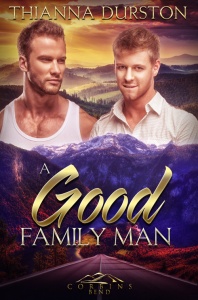 Jack Carmichael’s natural instinct is to take care of people. In his job as a U.S. Marshal, he has done that for 25 years. Unfortunately, being married to his job has left his love life in tatters. Now classified unfit for duty, he retires and comes home to Colorado to figure things out. Dominant and used to taking control like his brother Brent, he has never been interested in spanking. Until a cute Nurse Practitioner catches his attention.

Josh Martin feels lucky. He’s not only accepted into Corbin’s Bend, but he’ll be working at the brand new Corbin’s Bend Medical Clinic as its only Nurse Practitioner. At thirty-two, he figures this is his last-ditch attempt at finding a dominant partner who isn’t abusive. He finds more than his share of dominant men in Corbin’s Bend, not the least of which are the Carmichael brothers. Brent’s dominance is both comforting and unnerving, Jack’s turns him on.

Josh is unlike any submissive male Jack has encountered and when the younger man asks him out, he decides to give it a go. One day of fun turns into two, three…until Jack, with more failed relationships than he can count in his past and unsure he can be the head of house Josh needs, leaves, burying himself once again in work. Forced to see the error of his decision, he puts aside the worries that have plagued him for months and returns to Corbin’s Bend. To become the good family man he wants to be, he has to earn back Josh’s trust and truly take on a role he’s never considered before: head of a loving discipline household.

Thianna likes to say she’s eclectic, fun, and just a bit naughty. She can also add, subtract, multiply, and divide in her head, but if people ask her to do it at parties, she isn’t impressed. While she would love to say there wasn’t a genre she had read that she didn’t enjoy, it would be a lie. For some reason, she keeps skipping to the ends of mystery books to find out who done it.

The creator and acquisition editor for the Corbin’s Bend Romance series, she wants to know: Who else wants to be safe, secure, and spanked in Colorado?

Enter to win a Rafflecopter Prize: $5.00 gift card and copy of ‘A Good Family Man’ on release.  Must be 18 years of age or older to enter.  Link and prizes provided by the author and Pride Promotions.

The dogs days of August are here and those words have so many meanings, past, and present.  According to the Romans and other Mediterranean cultures, the dog days referred to the heat and the dog star Sirius “burning” so “hot” in the night  and morning skies.  The largest, brightest star in the Canis major constellation, Sirius the Dog Star, also the brightest star that we can see unaided in the night sky, came to be associated in ancient days with the heat of the season when this constellation rose and set along with the sun just as it does now.

When this constellation was high, the shepherds drove their flocks down from the mountain grazing lands into their safer pens close to their villages. Other measures were also taken to safeguard their water supply and gardens. Why?  Because the heat was also driving the predators out of the mountains as well, looking for water and food. The villagers depended upon their dogs to guard their flocks just as some do today. What flock guard dogs can you  name? Maremmas,Anatolian shepherds, Great Pyrenees, Komondors, Kuvasz are just a few breeds that come to mind. They are often raised with the flocks they are meant to protect.  Dogs days indeed.

Which brings me to shelters and adopting a dog or cat or guinea pig or any animal up for adoption.  My local NBC New channel WRC is starting a Help Clear the Shelters program, which I thought was a wonderful idea.  Both Winston and Kirby are rescues and I can’t imagine my life without them, nor my hearthound rescues now gone to the rainbow bridge that came before them.  If I had room and the money, I would go for more.

How about you?  Does your budget (equally important), your house and heart have room for a four pawed, two winged or whatever shelter  animal?  Can you help clear your local shelter out? Or how about fostering?  Our shelters are overflowing with unwanted and thrown away animals.  Its heartbreaking.  And overwhelming.  Please help if you can.

Here are my two rescues…

Presently, my dogs are inside playing like mad with their plush  toys and Dingo bones (trust me, its like doggy crack),  We were outside earlier but the wind stilled, the air heated up, and Kirby, our Irish Wheaton that he is, had to come in, even clipped, he can’t take the heat.  Winston can, but won’t leave his buddy and Willow just is ready for a nap behind me in the chair as I write up the schedule.  Home is where my dogs and books are.  Happy Reading!