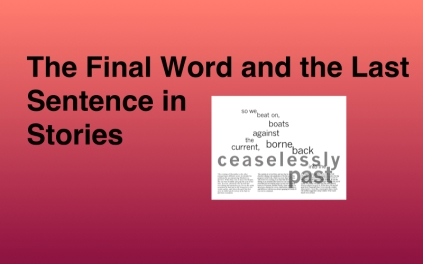 The last couple of weeks I have been talking about the first lines in novels.  The ones that pull  you in, set the tone, even lay out some of the plot.  Its so hard to get that all important first line right.  Look how few make it into the top 10, 20 or even top 50 lists.  Not many.  It was even harder to compile our own.  So many first lines had the name of the main character or rambled on or just didn’t do their job.

Now let’s switch to the end of the story.  The last line to be exact. The last lines of novels are the final word. The author may offer resolution (or just more questions). The last line may make us scream in frustration and clap in joy and stare silently in shock. In the end, we take what we can get. Here are a few famous last lines. Notice how many authors and novels also had the most famous first lines. Which of the famous last lines in literature is your favorite?

“Before reaching the final line, however, he had already understood that he would never leave that room, for it was foreseen that the city of mirrors (or mirages) would be wiped out by the wind and exiled from the memory of men at the precise moment when Aureliano Babilonia would finish deciphering the parchments, and that everything written on them was unrepeatable since time immemorial and forever more, because races condemned to one hundred years of solitude did not have a second opportunity on earth.”
– Gabriel Garcia Marquez, One Hundred Years of Solitude

“It was the devious-cruising Rachel, that in her retracing search after her missing children, only found another orphan.”
– Herman Melville, Moby-Dick

“The knife came down, missing him by inches, and he took off.”
– Joseph Heller, Catch-22

“So in America when the sun goes down and I sit on the old broken-down river pier watching the long, long skies over New Jersey and sense all that raw land that rolls in one unbelievable huge bulge over to the West Coast, and all that road going, all the people dreaming in the immensity of it, and in Iowa I know by now the children must be crying in the land where they let the children cry, and tonight the stars’ll be out, and don’t you know that God is Pooh Bear? the evening star must be drooping and shedding her sparkler dims on the prairie, which is just before the coming of complete night that blesses the earth, darkens all rivers, cups the peaks and folds the final shore in, and nobody, nobody knows what’s going to happen to anybody besides the forlorn rags of growing old, I think of Dean Moriarty, I even think of Old Dean Moriarty the father we never found, I think of Dean Moriarty.”
– Jack Kerouac, On the Road

“But I reckon I got to light out for the Territory ahead of the rest, because Aunt Sally she’s going to adopt me and sivilize me and I can’t stand it. I been there before.”
– Mark Twain, The Adventures of Huckleberry Finn

“His soul swooned slowly as he heard the snow falling faintly through the universe and faintly falling, like the descent of their last end, upon all the living and the dead.”
– James Joyce, Dubliners, “The Dead”

“Yes, she thought, laying down her brush in extreme fatigue, I have had my vision.”
– Virginia Woolf, To the Lighthouse

“If I were a younger man, I would write a history of human stupidity; and I would climb to the top of Mount McCabe and lie down on my back with my history for a pillow; and I would take from the ground some of the blue-white poison that makes statues of men; and I would make a statue of myself, lying on my back, grinning horribly, and thumbing my nose at You Know Who.”
– Kurt Vonnegut, Cat’s Cradle

“So we beat on, boats against the current, borne back ceaselessly into the past.”
– F. Scott Fitzgerald, The Great Gatsby

Now what famous last lines, no not death lines, last lines of books can you remember?  Yep, a list of those is coming too.  But not this week.  Next up, our up coming schedule. 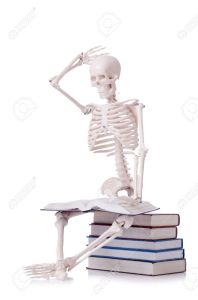 ☠ – Look for on our October Scary Reads and Recommendations coming soon.