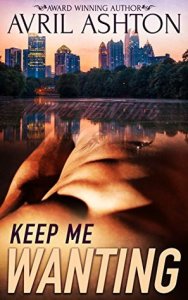 The last thing on Damian Archer’s mind is a relationship. He’s focused on running the family business and keeping up appearances. He’s fine with the way things are, until the tattooed help at a friend’s party takes one look at him and calls him on his bull.

Fired from a brand new job, Fin Thornton is homeless and penniless. He knows men like Damian. He abhors men like Damian. Despite the wealthy man coming to his aid when he desperately needs it, Fin is hesitant to lower his guard. Yet Damian insists on being in Fin’s face, demanding things and offering help.

In spite of their differences, something keeps them wanting each other. The same connection that has Damian desperate to stake a claim on the skittish Fin. But it will take a ghost from Fin’s tragic past to show both men that what they have is worth more than money.

Okay we all know how I love Avril Ashton. Good Lord that woman can write a sex scene. Oh my goodness. I would have rather this been straight smut then the contemporary story. Damian and Fin are extremely hot together. I think I need to reiterate that. I’m never bored with that aspect of her stories. For this one though, I kind of felt like we walked into the middle of this potential couple history. From the first it was rudeness between the two and I just felt like we were missing the introduction between the two.  But it moved fast from that initial meeting.

I do like the chemistry between the two a lot. It was some sparks, then they were on fire. I mean Fin was a little spit fire from beginning to end. I like Damian, I kind of wanted to see more of him. We saw his family side, business side but nothing of just Damian. I don’t have to worry that the sexual side of the relationship is boring or dull. Goodness, I re-read a few pages this morning for scientific research purposes only. She writes those scenes extremely well. I needed to reiterate that. LOL. All in all I thought this was a cute contemporary novella. Mrs. A is never going to not have a little drama, or funk in her stories so we did get this. I can’t wait for that little prequel whenever that’s out. I see you Sullivan & Carter.

Cover Art by: Emmy Ellis, did a wonderful job. I loved the cover model and the background a lot. The model and his piercing were spot on.