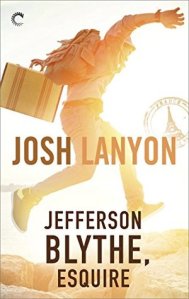 In this fast, fun and dead-sexy male/male new-adult caper from multi-award-winning author Josh Lanyon, twentysomething Jefferson Blythe gets lost, gets found, falls in love and comes out…all in the span of one wild summer

After his first relationship goes disastrously awry, Jeff Blythe uses his savings to tour Europe—the old-fashioned way. Armed with his grandfather’s 1960 copy of Esquire’s Europe in Style, Jeff sets off looking for adventure but finds much, much more than he bargained for…

In London, dodging questions from shady criminals about a mysterious package he most certainly does not have is simple. Losing the gunmen who are convinced he’s someone else is not. And when George, an old friend, offers him help—and a place to stay, and perhaps something more—things become complicated.

Is George really who he seems? And is Jeff finally ready to act on his attraction?

From Paris to Rome and back again, Jeff and George fall for each other, hard, while quite literally running for their lives. But trusting George at his word may leave Jeff vulnerable—in more ways than one.

Jefferson Blythe, Esquire is simply something new and yet totally Josh Lanyon at the same time.  A new adult story told from the point of view of Jeff Blythe, a young man fleeing across the ocean from an expected marriage he knew was wrong for both of them. With his grandfather’s heavily noted (and need we say outdated) 1960 copy of Esquire’s Europe in Style in hand, Jeff decides to tour Europe using that as his guide.  Oh, the naivete’.  And yes, it all starts going disastrously awry from the start, ala Josh Lanyon style.

One of the elements that I have always loved about Lanyon’s style is the way the author combines humor with bleak reality.  The main character is often at their lowest point and yet some small bit of humor or a slight funny line of dialog will slide into the moment, making it still real but  more human and a tad lighter.  It happens here right at the start when Jeff goes from plane, making his way laboriously to the place where he expects to  stay. Its a fight all the way and when he gets there?  More awfulness ensues…to our shock and hilarity.

But that start is our introduction to Jeff Blythe. We see the start of his learning process and the beginning of what will be an exponential tour of growth as he learns about himself, who he wants to be and who he wants to be with.  That would be George, a former friend who now lives in London and isn’t exactly who he tells Jeff, or “Jefferson” as George calls him, exactly who he seems to be.    What follows is a series of mishaps, investigations, theft, and all sorts of things criminal across Europe in increasing degrees of seriousness until Jeff is finally involved in murder.

There is a pattern here that Lanyon lays out for Jefferson and the reader.  Things start to unfold, events happen, Jefferson and George try to move forward and Jefferson leaves to another part of Europe while growing emotionally, criminals follow as do more threatening events, Jefferson grows increasingly resourceful and independent…and the story just gets better.  I won’t spoil it further.  I did find myself thinking fondly about those wonderful 60’s films with Audrey Hepburn, Cary Grant, superb background music, thieves playing out across Europe with their clever dialog.  But there was no self discovery in those films as there is here, no Jefferson Blythe to adore and rejoice in as he realizes he is resourceful, gay and knows exactly who it is he loves.  I want more Jefferson Blythe, I really do.

I did waver a bit about that ending. Did I love it? Wish it was longer?  Finally I decided it was the perfect way for Jefferson Blythe to end his journey.  At least for the moment.

Cover art captures the essence of the character and story. Lovely.