Gonna Marry Me A Billionaire:

Thank you Melanie and Scattered Thoughts and Rogue Words for hosting the First Comes Marriage book tour! For those readers who may not already know, First Comes Marriage is the second book in the brand new Dreamspun Desires line of gay category romances from Dreamspinner Press. Be sure to read to the bottom of the post for an excerpt from the book, as well as the Rafflecopter giveaway. You could win a dozen red roses for your sweetheart or yourself!

The Dreamspun Desires line takes its inspiration from the classic romances and features well-loved romance tropes. You’d recognize these setups from the old Harlequin style books: forced marriages, enemies to lovers, mistaken identity, and the one I used in First Comes Marriage, the marriage of convenience.

There’s one other classic trope in First Comes Marriage, however, and it’s one romance readers will immediately recognize…. Poor character falls for rich character, and vice-versa. It’s a trope rooted in dreams of living in enormous mansions, traveling all over the world and in style, and being able to buy whatever we want, whenever we want. 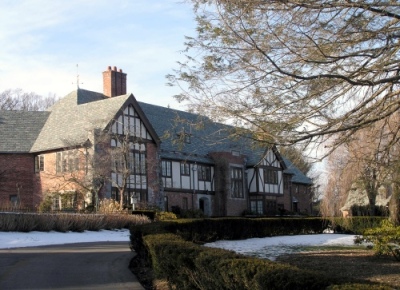 I had a ton of fun creating my billionaire playboy, Jesse Donovan, one of the two main characters in First Comes Marriage. On the surface, Jesse is a confident businessman who runs his family’s boat building business. We’re talking big boats. Very big boats, including commercial shipping vessels. Under the surface, Jesse is slightly geeky and very sweet. But he doesn’t show that side to just anyone. 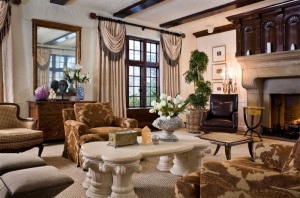 Enter my poor boy, Chris Valentine, a struggling novelist who works as a barista at a coffee shop in New York City. Chris is very different from Jesse. He’s a bit of a nonconformist and he isn’t overly impressed with money. Chris immediately likes Jesse when they meet, but he doesn’t jump at Jesse’s million dollar offer to enter into a fake marriage with him. 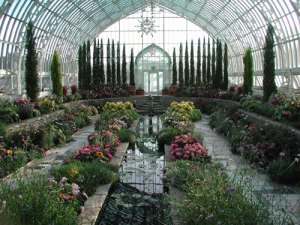 Creating the universe Jesse lives in was a lot of fun. Jesse’s family’s mansion is in Connecticut, built on a bluff overlooking the ocean. I modeled it on a gorgeous Connecticut mansion with a storied history. Tudor, with lots of personality, Windmere, as the Donovan family named the estate is a beautiful place. Flowering trees and bushes grace the sprawling grounds. There are formal and informal gardens. There’s a stable for horses, a small beach, a tree-house of sorts that any adult would be happy to live in, a coach house and cottages, and even a family cemetery.

Inside, the house is classic, with several wings in which the inhabitants and staff live. There’s a magnificent conservatory with high glass ceilings and huge plants, there are libraries filled with books, including a collection of expensive old books.

Against this backdrop, Chris is a bit overwhelmed. But that’s the point: his view of Jesse’s idyllic life is the jumping off point for their relationship. Chris soon discovers, however, that although Jesse might not be the “poor little rich kid,” he’s down to earth and has experienced his share of pain and loss over the years.

The classic category romance is all about escaping from reality. What better way to escape than to spend a few hours immersed in a world few of us will ever experience? I’ll leave you with an excerpt from First Comes Marriage which will give you a sense of the strange new world Chris walks into when he comes to live at Windmere. I hope you enjoy it! –Shira

Their marriage was supposed to be all business….

Jesse’s in a pinch. To keep control of his company, he has to marry. So he has valid reasons for offering Chris this business deal: in exchange for living in a gorgeous mansion for a year, playing the doting husband, Chris gets all the writing time he wants and walks away with a million-dollar payoff. Surely Chris can handle that. He can handle living with the most handsome and endearing man he’s ever met, a man he immediately knows he wants in the worst way and can’t have. Or can he?

The setup: Jesse needs to marry because his grandfather’s will says he will lose control of the family business to his stepgrandmother, Wenda, if he doesn’t marry within a year of his grandfather’s death. Jesse and Chris have just tied the knot in Manhattan and are headed to Connecticut to Jesse’s estate, Windmere.

The limo turned off the main road a moment later, and they waited as a large gate swung open to admit them. A high brick wall surrounded the property, obscuring the house.

Huge oaks dotted the grounds, and the long drive wound through thickets of flowering bushes and lush green vegetation. Underneath the immense trees, daffodils and tulips poked through the dirt. A winding creek made its way across the property and disappeared into a forest of evergreens and bushes. Jesse opened the windows, and the bright scent of freshly cut grass wafted in.

“This is Windmere,” Jesse said, his expression one of true pride. “We have a few minutes before we get to the house, so I guess we’d better go through a few things.”

“Just be yourself. The only backstory you need to know is that we met at one of your readings a few months ago.”

“And you? Mr. Bachelor of the Century?”

“Yes, well, that one’s a bit trickier,” Jesse agreed. “I just figured out that I’m bisexual.”

“Ah, okay,” Chris said, relieved. Because if he knew Jesse might actually be interested in something more than playacting, it would make things even more complicated. “Got it. And?”

“And that’s it. It’s none of her business who I marry.”

Chris was about to point out that, in a sense, it was Wenda’s business, but at that moment the limo rolled past the dense trees to reveal the house. Only “house” wasn’t exactly the word for it.

A sprawling Tudor-style mansion with steeply pitched roofs, dark half timbers and white stone beneath the eaves, mullioned windows of every shape imaginable, and high chimneys, with a herringboned brick façade on the lower floors, Windmere was both imposing and beautiful. Chris stepped from the limo and stared at the building while the rustling leaves from the huge weeping willow that overhung the driveway made a sound much like the brush of a hand over a stringed instrument. The faint scent of the ocean wafted on the breeze.

Shira Anthony is a complete sucker for a happily-ever-after, and rarely reads or writes a story without one. Never a fan of instalove, Shira likes to write stories about real men with real issues making real relationships work.

In her last incarnation, Shira was a professional opera singer, performing roles in such operas as “Tosca,” “Pagliacci,” and “La Traviata,” among others. Her Blue Notes Series is loosely based upon her own experiences as a professional musician.

Shira is married with two children and two insane dogs and when she’s not writing, she is usually in a courtroom trying to make the world safer for children. When she’s not working, she can be found aboard a 36’ catamaran at the Carolina coast with her favorite sexy captain at the wheel. She’s given up TV for evenings spent with her laptop, and she never goes anywhere without a pile of unread M/M romance on her Kindle.

Interested in hearing Shira sing? Here’s a link to a live performance of Shira singing an aria from Puccini’s “Tosca”: http://www.shiraanthony.com/wp-conten…

You can subscribe to Shira’s monthly newsletter for updates, free fiction, and subscriber-only contests here: http://www.shiraanthony.com/newsletter/

Where you can find Shira

First Comes Marriage is all above love and romance, and Shira’s grand prize is a dozen red roses for your sweetheart (or whoever you think deserves it!). First prize is a $10 Dreamspinner Gift Certificate.  Must be 18  years of age or older to enter.

This past week saw the passing of two wonderful men who left deep emotional impact on those who heard their music or watched their films, (although arguably not to the same extent) to also to those in their professions, musician/actor  David Bowie and actor Alan Rickman.  For over forty years, David Bowie, singer, songwriter,  musician, record producer, painter and actor, continued to press the boundaries of what he thought he could and  music could be.  But always it was his unique voice and passion behind the lyrics and music that helped make his songs the playlist for our lives,  generations past, present, and future, whether it was as Major Tom, the Thin White Duke or Ziggy Stardust or  something reimagined one more..  Only a few notes and we knew who was singing.

Alan Rickman’s voice was just as unigue.  Oh, that voice.  And that glare.  I loved him as Professor Snape, but that wasn’t the first time I saw him or fell in love.  It could have been Alan Rickman as Galaxy Quest’s Sir Alexander Dane ” By Grabthar’s hammer, by the suns of Worvan, you shall be avenged.” Sniff.  Or as the wonderful villain, Hans Gruber, in the original Die Hard with Bruce Willis, Jamie the ghost in Truly, Madly Deeply …yes, that’s probably the start.  But it continued with Steve Spurrier in Bottle Shock, Col. Brandon in Sense and Sensibility and so many more.  His last project?  A student’s voiceover for a Save the Children and Refugee Council joint charity appeal in what is thought to be one of his last ever pieces of work.

Why bring these men up on a book blog?  A couple of reasons. One, David Bowie and his music has been a constant thread in my life and I couldn’t let his death go without comment.  Although Alan Rickman doesn’t hold the same iconic place in my life as David Bowie does, I hold in him huge esteem.

When I read books, the conversations and the dialogs, I hear the voices in my head so clearly.  Writers like B.A. Tortuga and Neil S. Plakcy especially have the ability to make those wonderful local confabulations sing with the rhythm and flavor of the cultures of the people the words are flowing from.   Now with  audiobooks, I have to make the transition from the voices in my head (no wisecracks) to the voices the narrators are putting forth, often beautifully.  Do they replace a  unique voice?  No, but offer another interpretation in their place.

Both men were wonderful at interpreting and creating, whether it was classical music or literature or something modern or wildly new and different.  Ever listen to David Bowie and Bing Crosby?  He was equally relaxed singing with him or with Freddie Mercury or on stage in New York City.  Alan Rickman has credits as a director, writer, and producer as well as actor. But both men, its that voice, and the grace with which they moved through life will pull at my memory.   For Alan Rickman, sometimes I would read a book, and his voice would sneak into a character…with a shiver or two as a result.  I would be reading and snippets of David Bowie’s Cat People (Putting Out the Fire) or some other refrain would  run through my mind -yes shifters).  Music, voices and books are forever intertwined for me.

David Bowie and Alan Rickman are gone. How grateful I am that their voices will live on in music, and in film.  Do you have a favorite David Bowie song or album?  How about Alan Rickman?  By Grabthar’s hammer!  Let us know!

This Tortoise Could Save a Life – Ft. Alan Rickman