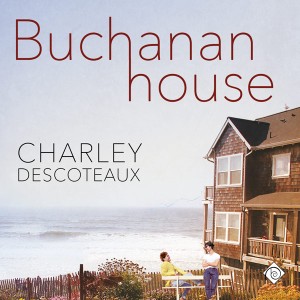 Our first glimpse of Eric Allen is during his grandmother’s funeral. We get some background information about their relationship, as well as the situation between him and his remaining family members. If you’re reading the book without looking at the blurb first, you can misinterpret Nathan’s and Eric’s relationship during the opening scene.

Jewell, Eric’s grandmother, left him his estate, but his mother and brother are after their share. After taking care of all the legalities, with the help of Jewell’s best friend, Nathan invited Eric for a small vacation. During which, he takes him to an abandoned hotel on an isolated stretch of the Central Oregon Coast. Since Eric is a line cook and his friend Nathan, a waiter, they pooled together all their money, plus the inheritance to buy the hotel.

Naming the hotel after the only bachelor president with a male friend, sounded like a good way to start their business. They had several months to get the hotel ready for its grand opening on the Fourth of July weekend. With the help of Tim, a local handyman, some friends, and a pair of new part-time employees, they set to work to receive their first guests. All their relationships get tangled with every passing week, and what started as a kid’s dream between Eric and Nathan turned into a small family.

Tim’s and Eric’s relationship blossoms with time, but their separate growth is as important as their romance. In the beginning, we don’t get a clear path to their future, but after a turn of events, their love goes from zero to one-hundred on a handful of pages. By the end of the story, we are cheering for the MCs and looking forward to learning more about the hotel’s future.

Buchanan House is more than a romance. It’s a story of healing, friendship, and self-discovery. Yes, Tim and Eric are the main characters, and they get more than their HEA, but how they got there is more important than the end result. As well as all the events that surrounded them.

We don’t get into their romance until later in the book. Eric’s and Nathan’s friendship takes the first part of the book, and Eric’s self-discovery unfolds with every chapter. His insecurities shaped him, leaving him second-guessing all his decisions and relationships. Nathan’s friendship and Tim’s love are the catalysts that get him to be the man he always dreamed.

All the characters in the story had a purpose, and the author incorporated not only gay characters, but bisexual, lesbians, and trans*, too. Also, the characters discussed their differences, sexualities, and genders. Everyone gets a small backstory, even those interacting with the MCs for a short amount of time.

Tim’s family is great, and the way they interacted with Eric, even the ones that aren’t completely comfortable with their sexuality do it with respect. Eric’s family, on the other hand, wanted nothing more than Jewell’s money. They didn’t care for Eric or his dreams and did everything they could to interfere.

The setting and the atmosphere played an important part in this story— Eric’s recipes too. It’s easy to identify the smells, colors, and shaped introduced by the author. Even the way each character dresses is part of their dossier. And the house, from its flowers to its moldings is another character in the story.

This is my first story narrated by Alexander Johns. I enjoyed his cadence and the distinction between the characters. My only complaint would be with the quality of the audio. For some reason, parts of the file had static in the background and others sounded as if the story was recorded in an empty room, creating an echo.

L.C. Chase did an excellent job finding a house that matched the book’s description. Perhaps, I’d have left the two figures out of the cover since they look like an afterthought. 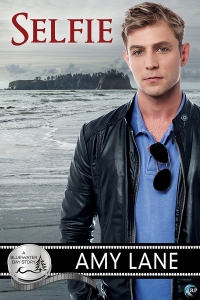 Long term Amy Lane fans may remember how they felt after completing Chase in Shadow—devastated, gutted, and put back together in a better way than they were before that experience. Well, guess what? This one is even more heart-wrenching but it’s also heartwarming and full of hope. And there’s just the right amount of humor to balance out the grief and sadness.

As the story opens, Connor Montgomery has just done the selfie of all selfies—he’s made a one hour video and posted it on YouTube. And thank God, he forgot the sound. His agent/friend/mother-figure, Jillian, rushes to his side to try to restore a semblance of sanity to his life. One year ago, his lover of ten years, his soulmate, Vinnie, was killed in an auto accident, and Connor has been grieving alone in his Malibu home—the one next door to Vinnie’s—for the past year. No one knew they were lovers. Vinnie didn’t want his parents to find out, and after he was killed, Connor upheld his wishes, therefore he’s grieved alone while watching Vinnie’s family come and go next door. Neither young man had left a will so the entire contents of Vinnie’s home—memorabilia from their lives together—now belongs to Vinnie’s family. When Jilly gets to Connor, it’s evident that she too has been missing Vinnie and together the two spend much needed time grieving him together because “grieving alone had left us lost, but grieving together was just easier to do.”

Of course, he was going to melt down. Of course, he would be so wounded he wouldn’t be able to function. And yet, this wonderful, strong, sweet man survives, and when Jilly tells him of an offer from the Wolf’s Landing TV show, Connor sees it as a chance to live again. God knows, it’s about time.

The move turns out to be more than he could have hoped for, if he indeed dared to hope. Noah Dakers enters his life as chauffer, personal assistant, bodyguard, and ultimately lover. Noah has an advanced degree in philosophy but is perfectly happy working on the show in Bluewater Bay to stay close to his family. Noah immediately realizes that Connor needs to be taken in hand and given the support that Connor usually doles out to others. Noah sees behind the façade to the man who needs someone to take care of him, to bring him a measure of peace, and lead him back into the land of the living. Connor’s been walking around in a cloud of grief for so long that he doesn’t even realize he can have a satisfying sex life again. Connor craves Noah’s dominance, thinking “the only reason to put your pleasure in someone else’s hands—if you know they’ll use their hands to stroke that pleasure into ecstasy.”

What Noah doesn’t realize at first is that Connor speaks to Vinnie in his mind. He’s moved past the initial stage of shock and now runs everything past Vinnie, including his attraction to Noah. Never having had the closure of saying good-bye to Vinnie is wreaking havoc on Connor’s emotional state, a havoc which has unseen and potentially deadly consequences.

I loved both of these MCs and the whole host of secondary characters in this story, including Noah’s grandmother, father, and sister, Vivian, and Connor’s staunchest supporter, Jilly. Amy Lane doesn’t just provide a sketch of a character—she nails it with carefully selected words and phrases that paint a picture in the reader’s imagination. Providing us with a visit with some of the other Wolf’s Landing characters like Carter and Levi was simply icing on the cake, but greatly appreciated.

There’s both pathos and humor, and in typical Amy Lane fashion, the humor is often in the obvious details of daily living such as when an actor has his cameraman lying before him taking a shot as the camera looks upward, and the actor has to assure he clipped his nose hairs and blew so that nobody sees his boogers on camera! Gawd, I love this author’s work—some more than others—and this one is right up there among my all-time favorites.

This story brought tears to my eyes but I didn’t sob. It’s simply a beautiful love story—both of the lost love and the new—and the hope it generates wipes out any sad tears and turns them to tears of joy. I highly recommend this to all who love MM romance, especially to those who enjoy recovery from grief and/or hurt-comfort with a little D/s thrown in. It certainly can be read as a standalone, as can all stories in the Bluewater Bay universe, but if you haven’t read any others in this series, by all means start now with Starstruck by L.A. Witt, the first of many wonderful books in this world.

Cover art by L.C. Chase depicts Connor standing on the shore overlooking an island in the sound, an island that figures prominently in the story, thereby making the cover perfect for this book. 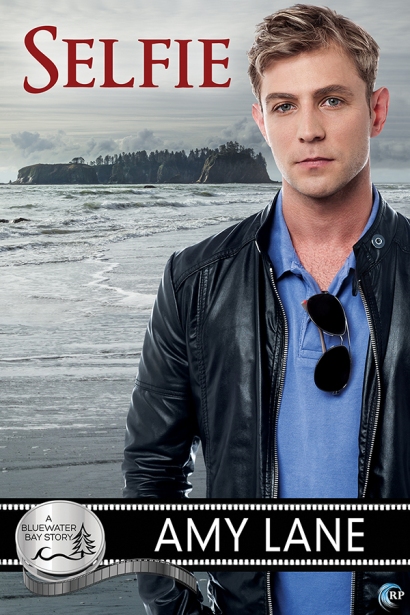 For the Selfie blog tour, Amy Lane has written a few monologues from Vinnie’s video blog, set prior to the crash that takes his life. These monologues, performed by Nick J. Russo of Dark Night Sound, correspond to scenes or memories reference by Connor in Selfie, giving you a unique look at this off-screen character.

Please visit http://riptidepublishing.com/titles/selfie and select the extras tab for all six monologues, which will be updated there as they are published.

One year ago, actor Connor Montgomery lost the love of his life to a drunk driver. But what’s worse for Connor is what he still has: a lifetime of secrets born of hiding his relationship from the glare of Hollywood. Unable to let go of the world he and Vinnie shared, Connor films a drunken YouTube confession on the anniversary of Vinnie’s death.

Thankfully, the video was silent—a familiar state for Connor—so his secret is still safe. He needs a fresh start, and a new role on the hit TV show Wolf’s Landing might be just that.

The move to Bluewater Bay may also mean a second chance in the form of his studio-assigned assistant. Noah Dakers sees through Connor’s facades more quickly than Connor could imagine. Noah’s quiet strength and sarcastic companionship offers Connor a chance at love that Hollywood’s closet has never allowed. But to accept it, Connor must let Vinnie go and learn to live again.

Amy Lane exists happily with her noisy family in a crumbling suburban crapmansion, and equally happily with the surprisingly demanding voices who live in her head.

She can be found at her computer, dodging housework, or simultaneously reading, watching television, and knitting, because she likes to freak people out by proving it can be done.

Nick J. Russo has been a professional performer for over a decade, but has been voicing audio books for the past few years. He has voiced several titles throughout the romance, sci-fi, supernatural, and thriller genres, and has recently started his very own sound studio; Dark Night Sound. On top of voice acting, Russo manages Dark Night Sound with his fiance and works with a staff of four up and coming narrators. In his free time, Russo is a drummer in a pop/rock cover band, loves to travel, and dreams of one day being able to voice a role in an animated comedy series.

To celebrate the release of Selfie, one lucky person will receive e-copies of Amy’s entire backlist with Riptide, and an Amy Lane t-shirt. Leave a comment to enter the contest. Entries close at midnight, Eastern time, on April 23, 2016. Contest is NOT restricted to U.S. entries. Thanks for following the tour, and don’t forget to leave your contact info!