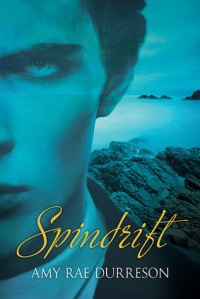 When lonely artist Siôn Ruston retreats to the seaside village of Rosewick Bay, Yorkshire, to recover from a suicide attempt, he doesn’t expect to encounter any ghosts, let alone the one who appears in his bedroom every morning at dawn. He also doesn’t expect to meet his ghost’s gorgeous, flirty descendant working at the local museum… and the village pub, and as a lifeboat volunteer. But Mattie’s great-great-grandfather isn’t the only specter in Rosewick Bay, and as Siôn and Mattie investigate an ill-fated love affair from a bygone era, they begin a romance of their own, one that will hopefully escape the tragedy Mattie’s ancestor suffered.

But the ghosts aren’t the only ones with secrets, and the things Siôn and Mattie are keeping from each other threaten to tear them apart. And all the while, the dead are biding their time, because the curse of Rosewick Bay has never been broken. If the ghosts are seen on the streets, local tradition foretells a man will drown before the summer’s end.

This author’s book A Frost of Cares is one of my top 5 books of this year so I was really excited to see that she was doing another romance/ghost story.  I have to say this didn’t disappoint.  There are two stories intertwined.  There is the current love story of Sion and Mattie and there is the love story from the past.  The story of Mattie’s great-great grandfather and a man named Joshua.
The writing was excellent and the imagery was so well done that I could picture myself there.  The story was downright creepy at times and I was glad I wasn’t reading it late at night.  Sion and Mattie were both well done characters and at first I thought they were too different for me to find a believable love story but I was wrong.  Over the course of the story it becomes apparent that they are complimentary for each other. Their story is both love story and a story about forgiving yourself. I also enjoyed the story of the men from the past although it was a melancholy tale.
This was a unique and creative story that was really well done in all aspects.  I highly recommend this.

Cover Artist: Brooke Albrecht:  I like the cover.  It didn’t really stand out to me but I thought it was nice.

Robert and his lover Ethan have drifted apart to the point that they are mere strangers living together. As things between them worsen Robert wonders if he ever truly loved anyone other than his first lover Keith who died of AIDS.
Then on one particularly lonely night Robert comes across a suicidal girl, Jess but it appears that there is more going on between Jess and Robert than either can guess at first. But what exactly does this sense of familiarity and love translate to between a gay man and lesbian?
I really think this book is not aptly named, I mean I don’t think it ever deals with orientation, I mean the characters in this book are not conflicted about their orientation and neither are they troubled by it. While this book ends on a note that kind of stresses orientation, this book is truly just a story of love.
It is a very engaging story. I read this book at a stretch; I just couldn’t put it down. It is a short book but what I liked about it is that the story never becomes predictable. What kept me turning the pages one after the other was the fact that I had no idea where this story would take me or how it would end.
Our MCs are Robert and Jessica who are both in ways dealing with loss. They bond over this fact but what truly makes them want to be with the other is the fact that there is a deeper sense of familiarity and love that underlies there meetings. Since the moment they met Jessica has felt that she is meeting someone she already knows and loves. Complicating this fact is that even though they feel love towards the other their orientations are completely incompatible. This story also follows two other characters, Ethan, Robert’s boyfriend and his drug dealer, Tony.
This story really focuses on its characters, you can sympathize with Robert’s desire to be blind to the obvious, to not have to face his boyfriend’s infidelities as well as his potentially lethal lifestyle and bury that under the joy of having someone else who understands his love for Keith. While Ethan’s struggle with his addiction is painful, he is wasting away and try as he might to climb out of the abyss he is in, he only ever manages to dig himself deeper. Tony’s guilt over being the reason many people have lost touch with themselves and his shame over not being able to give up the opportunity to make just a little more money is honest. And then there is Jess who is reeling form loss, is burdened by her lack of finances and struggling to understand these new feelings that have awakened in her… for a man…
This story really ties together the lives of these four characters and makes for a compelling read. This book is firstly about love and secondly about the human condition. It is an amazing read.
Cover Art by Wilde City Press. I liked the cover but I’m unsure as to how it relates to the story.
Sales Links
Wilde City Press