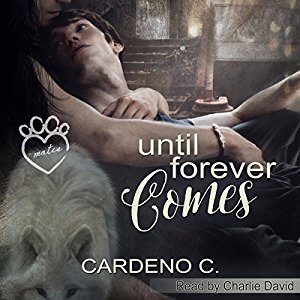 A sensitive wolf shifter and a vicious vampire challenge history, greed, and the very fabric of their beings in order to stay together until forever comes.

Plagued by pain and weakness all his life, Ethan Abbatt is a wolf shifter who can’t shift. Hoping to find an honorable death by joining his pack mates in a vampire attack, Ethan instead learns two things: draining his blood releases his pain and his wolf, and he has a true mate – a vampire named Miguel.

Over four centuries old, strong, powerful, and vicious, Miguel Rodriguez walks through life as a shadow, without happiness or affection. When a young shifter tells Miguel they’re true mates, destined to be together, Miguel sends him away. But Ethan is persistent and being together comes so naturally that Miguel can’t resist for long. The challenge is keeping themselves alive so they can stay by each other’s side until forever comes.

Ethan has always been an outsider to his pack and in his family.  When he is drawn to Miguel he realizes that he does have a true mate, the one thing he never thought he would have.  Miguel takes a little more convincing but Ethan can be more than stubborn enough.

This story is told from Ethan’s point of view so you can feel just how broken he feels with his family and how determined he is to make his home with Miguel.  He packs up everything he can carry so that he can leave his parent’s home to make a life with Miguel knowing that his mating will never be accepted by his pack.  Ethan is such a sweet heart and I felt connected to him throughout the story.  Miguel doesn’t quite understand Ethan’s connection to him but it’s the first time in a long time that he isn’t so hungry that he doesn’t need to drink more than enough for multiple vampires.  Ethan’s illness allows him to feed Miguel despite that shifter blood is usually poisonous to vampires.

Charlie David did a good job narrating this story.  I could connect with the characters through the voices and emotions he portrayed.  However, he didn’t seem to stay consistent with Ethan’s voice in the story, I always knew who was talking but his accent fluctuated and changed throughout the story.

Cover art is absolutely beautiful and gives a wonderful visual of these two characters together.