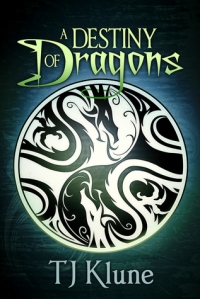 Sequel to The Lightning-Struck Heart

Once upon a time, the wizard’s apprentice Sam of Wilds got his happily ever after in the arms of his cornerstone, Knight Commander Ryan Foxheart. A year has passed, and while Sam’s been captured five or six more times since then, things are pretty great. His parents are happy, Gary and Tiggy still eat sass for breakfast, Randall is somehow alive despite being older than the gods, the King rules with a gentle hand, Kevin the dragon is as gross as ever, Morgan sighs a lot, Ryan continues to be dashing and immaculate, and Sam is close to convincing Prince Justin they will be best friends forever.

Because Vadoma, the leader of the gypsy clan and Sam’s grandmother, has come to the City of Lockes with a dire prophecy written in the stars: a man of shadows is rising and will consume the world unless Sam faces his destiny and gathers the five dragons of Verania at his side.

And she brings along her second-in-command, a man named Ruv.

I was waiting for this book since I finished The Lightning-Struck Heart in the 2015. I was waiting for Sam to take me on his beautiful world with his amazing friends. TJ didn’t disappoint me. He did great, again.

I spent a whole week on A Destiny of Dragons , I dosed the reading not only because I actually didn’t have a lot of time, but I wanted to truly enjoyed each single word. And IMO that’s the key of the success of TJ Klune’s  writing especially in these kind of stories: each word is perfect, each sentences is hilarious, every new chapter is a surprise. The reader can’t try to imagine where he was going to bring us, because everything is unpredictable and over the top. And I can’t have enough.

I couldn’t wait for meet again Gary, he is still sassy and beautiful as ever, still in love with Kevin, no matter what he claims. And then Tiggy, with his big heart and his readiness to smash things and people. But I have a confession to make, someone else stole my heart in this book and it was inevitable, I’m pretty sure no one will be able to resist at a fourteen years old emo snake dragon. I want Zero to be the main characters in the next book in the series. He deserves so much from life and I bet Sam will take care of him, since he is such a good boy. And good boys always win, right? Well I can tell you me and Ryan were pissed more than once with our beloved (apprentice) wizard.

I feel to of course recommend this series, it’s funny, light, full of amazing characters, most of all it’s packed with feelings, every kind of feeling you can think of.

The cover art by Paul Richmond is simpler compared to the cover of the first book and I like it, but maybe  simple and clean don’t fit the story a lot.