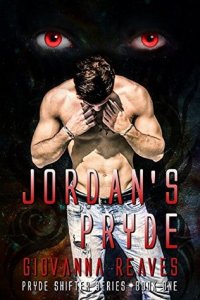 All he did was apply for a job and then his world was turned upside down.

Thrust into the world he had no idea about, Jordan Sutton’s only goal was to get a job working for Duncan Pryde of Pryde Industries. He thought werewolves, vampires, and Fey’s belonged in fairy tales, not in the real world. What will he do when he finds out that there’s more than meets the eye to his boss and his family?

Duncan Pryde had too much going on in his life. He became the sole guardian of his twin niece and nephew along with the addition of his pack and company. He had no time to think about a mate when trouble comes to his front door. What happens when the man he hired for one job turns out to be his destined mate? Does he deny what he feels or embrace it?

Jordan’s Pryde (Pryde Shifter #1) by Giovanna Reaves represents three new things for me.  New book, new series and new author.  I picked it up based on the synopsis and the fact that it’s hard for me to pass any shifter story by.  They are pretty much an auto read for me.  Throw in the idea of an Alpha who’s just become the guardian of his young niece and nephew while being in charge of a pack and business empire?  Just seemed too juicy for words.

In fact Reaves takes the story beyond what I had imagined.  Into a universe where there’s murderous hunters, kingdoms to be had, evil plots unfolding and so much more.  I almost wish the author  had left it at the overworked alpha and the adorable employee romance…..almost.   But Reaves started to build something very interesting here with other supernaturals , sanguines aka vampires, along with werewolves, fae along with the human hunters.  As  the author was laying down the foundation for the series and story,  she was also introducing her characters.

Jordan Sutton was an unusual main character, one I alternated between liking and feeling his lack of realistic reactions took me away from connecting with him.  At times I find him charming and others, especially when he’s been smacked in the gut with some unbelievable fact/knowledge, the sort of ‘roll with it’ tendency or lack of shock takes away a layer of depth he’d have  otherwise.  Duncan Pryde is another character I like but sometimes feel that we don’t get enough interaction with him within the storyline.  However, there is a lot going on here as the author scrambled to lay everything she needs for the next books in the series.

I did enjoy the tale, most certainly the children. It has plenty of great ideas and characters.  I love the direction the series and storylines are taking. Several secondary characters found mates with storylines to be resolved in the next book or books to come. Also, a major plot line was left unfinished that may be a series story arc (evil laugh ensues).However, the story suffers also from the need of a red pen and editor.  Things like past and present tenses switched within one sentence (more than once) are noticeable, word choices that are close to what they should be like ‘unmanageable strength instead of unimaginable strength” but even more major, a good editor would have commented on things like Jordan’s lack of appropriate response to shocks to his system and had the author think about what they had written down.  Didn’t happen.

Will I read the next story in the series?  Absolutely.  I want to find out what happened.  And you never know, these other things can be corrected.