Almost There! The Best is Yet to Come

This week I’m devoting our blog to lists from our readers and what wonderful lists they came up with.  One author on many of there lists is one that will be on mine too.  But in what manner?  Because Annabeth Albert is one author I’m wrestling with right now for mine own lists because I love so many of her stories.  What do I choose from?  Her #gaymers series (Status Update, Beta Test)? Her Out of Uniform series (On Point) or even her newest one Rainbow Cove (Tender with a Twist)?  Rhys Ford for her gritty urban fantasy and contemporary? Heidi Cullinan? On and on, there are authors with multiple stories that made a huge impact on me this year…how to narrow the list down or do I?

Please feel free to chime in here.  Because my lists start tending to look like scrolls rolling across the floor…

And then there are the authors new to me and their  series, writers like J.M. Dabney, Dahlia Donovan, and Lindsey Black.

Yes, my list will be long.  Be prepared on the 31st!  Until then enjoy these wonderful lists from some of our readers and you still have until the end of the week to get yours in as well and be entered for our Best of 2017 Giveaways. See the details below.  Until next week..

Be Safe, Be Merry, and Happy Reading from all of us to all of you!

Happy Holidays to one and all from everyone here at Scattered Thoughts and Rogue Words!

Thanks for sharing your list with us. I never was very good at picking out books I thought were the best over all books I’ve read well here goes:

Best of series 2017:
At Last, The Beloved by Stella Starling
The F-Word by E. Davies
Regent’s Park Pack by Annabelle Jacobs (technically book 1 was released in 2016 but book 2 and 3 was released this year)
Luna Brothers by Ashe Moon

Best listened to audiobook in 2017:
Don’t Twunk With My Heart (Loving You 2) by Renae Kaye
Whyborne and Griffin series book 1-8 by Jordan l. Hawk
Lightning Struck Heart by T.J. Klune
Stranger on the Shore by Josh Lanyon
#gaymers series by Annabeth Albert

It is ALWAYS difficult for me to choose things for “Best” List. Mainly because I read a lot (more than 400 titles, MM and MF) so I hate sorting them out in order. But I’ll try. And I prefer to use the word “Favorite” rather than Best, since I know my taste is different than others

Favorite Novel Read in 2017
Back to You by Chris Scully
Kill Game by Cordelia Kingsbride
Love is Heartless by Kim Fielding
On Point by Annabeth Albert
Bad Behavior by L.A. Witt & Cari Z.
Accepting the Fall by Meg Harding
The Love Song of Sawyer Bell by Avon Gale (F/F Romance)
Tender with a Twist by Annabeth Albert
Sightlines by Santino Hassell

Series:Whyborne & Griffin by Jordan L. Hawk (has been since it started)

hanks fro all the good recs. Certainly a lot to look into. I didn’t know if this was limited to 2017 releases, but as far as fantasy goes: I read and loved the first 4 in Andrew Q. Gordon’s Champion of the Gods series this year, and the latest (4th – Child of Night & Day) was this year.

Who has made an impact on you this year?  Start thinking about it.  This week starts our Best of 2017 Giveaways.  We need your Best of in whatever Categories you would like to submit.  Have a Best of Covers?  Great!  How about a Bests of Supernatural Romance? Perfect! Best Historical Romance? Love it!  Getting the idea?  So what’s your Best of 2017?  I will be gathering mine for the next 2 weeks and will trot them out at the end of the month.  Prizes will be offered up! Gift certificates, more than one, for participations and more.

Ends this Saturday, December 30th.  So get those lists in and let’s starting comparing!  Happy compiling! Must be 18 years old to enter. 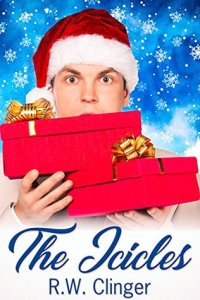 When Jonah Icicle decides to spend Christmas with his family and introduces his new boyfriend Sandy, everyone reacts differently. His mother Pam is combative, always judgmental to a fault, obnoxious, and loud. Jonah’s sister Willa adores the new man in her brother’s life and feels he will be a key player in their close unit. Willa’s husband Bobo suffers from hypersexuality and unfortunately can’t keep his hands off Sandy. And Jake, Jonah’s brother and Pam’s favorite son, is more interested in his marijuana than his relatives.

As the snow flies and the electricity goes out, the Icicles fight, hug, and laugh. Can they welcome the holiday spirit — and Sandy — into their lives?

What did I just read?  That is what has been going through my head since I finished this book.  With how they keep referring to what happened when Jonah brought his previous boyfriend home I can’t believe he is willing to bring another.

To me, Jonah’s family is just plain nuts.  His mom doesn’t show respect for anyone, Bobo is at first only referred to as a cheater but apparently his hypersexuality is an excuse?  He didn’t say one nice thing about anyone in his family when he was trying to reassure Sandy in the truck during the ride.  I had trouble understanding these characters especially why they would subject themselves to these people even if they are family.  So much seemed scattered throughout the story that it made it even harder to get into it.

Kyle is struggling to run his coffee shop on his own after his partner walked out on him. He has his eye on Steven, who comes into the shop each day, but hasn’t worked up the nerve to express his interest. When Steven asks Kyle to help out with Christmas lunch at the homeless shelter where he works, Kyle is too exhausted to agree. He donates his tips but still feels he’s blown his chances with Steven and made himself look like a selfish jerk.

On Christmas Day, Kyle sees a way to make amends—to both Steven and the needy people depending on his kindness. It’s the right thing to do, and Kyle hopes he can clear up the misunderstanding and show Steven the type of man he really is. Maybe then they can consider some dessert when the lunch at the shelter is over…

Kyle and Steven have been flirting with each other for months but never took anything further.  Kyle has worked hard to make his coffee shop successful and doesn’t think before he gives Steven an answer.  I did love how he stepped up when he was walking and knew the people from the shelter needed help.  Despite their flirting neither of them know much about each other and they get a little bit of a chance to talk.  However, I couldn’t help but feel that Steven pushed Kyle a bit too much once they were alone and I didn’t like the explanation that it means more so it’s okay

Cover Art by Paul Richmond is the series cover for the Stocking Stuffer 2017 Advent collection.  Humorous but doesn’t pertain to one story.