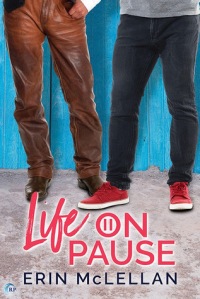 Niles Longfellow is a nerd, and not the trendy type of nerd, either. He wears a historically accurate homesteader costume to work every day, has a total of one friend, and doesn’t know how to talk to guys. So when he gets a flat tire and the hottest hipster ever stops to help him, all Niles can think is that he’s wearing his stupid cowboy getup. Normally, Niles feels invisible to other men, but he’d take that invisibility any day over Rusty Adams seeing him in suede and fringe.

Rusty moved to Bison Hills to help his sister raise her daughter, and nothing is more important to him than that. He’s also fresh off a breakup, and isn’t prepared for anything complicated. But then he meets Niles. Rusty sees Niles as more than a clumsy, insecure guy in a costume. He sees a man who is funny, quirky, and unexpected.

I really wanted to like this story but too many little things made it hard to enjoy at times.  Niles can’t even begin to understand that anyone could actually be attracted to him.  Rusty is still reeling from a recent break up and doesn’t really know how to go about wooing the insecure Niles.

I loved Niles and Rusty’s friendship that they striked up at the beginning, they become almost as in tune with each other as Niles is with his best friend Victor.  After they get together though Rusty would use Niles’s insecurities against him when they come up or interfere in their relationship.  At times he is the most caring person and the next he can say something very damaging.

I think Niles was adorable and he really needed the right person to support him in order for him to really grow.  He has been living “on pause” since his father’s stroke and doesn’t know how to move forward.  I could feel for Niles because I know what it’s like to feel out of place and not know how to act around others.  I loved when Rusty was sweet but then he could just cut Niles down and unfortunately it felt like they kept going in a circle.  Niles didn’t seem to really grow in confidence until they had resolved their issues near the end.

Cover art by LC Chase is eye catching and works well for this story.