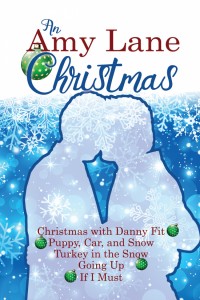 Celebrate the season with Amy Lane’s own brand of holiday cheer. Enjoy five classic Amy Lane Christmas stories, imbued with her signature blend of humor, romance, and heart-warming satisfaction as businessmen, lawyers, accountants, and teachers all find love this December. Includes: If I Must Christmas with Danny Fit Puppy, Car, and Snow Turkey in the Snow Going Up!
This was a great collection of some of this author’s older stories.  There are five stories here or varying lengths, and it’s a nice selection.  This is a good read for people who are already fans of this author but it’s also a nice place to start for people who have not read her before.
If I Must was the first book in the bundle and actually ended up being my least favorite.  It’s a friends to lovers story about two roommates who finally admit to their feelings about each other.  I had a hard time seeing the attraction between the two MC’s.
Christmas with Danny Fit was a lovely story that tackles the issue of body imagine.  Kit is slightly chubby and shy and awkward and he’s got a crush on his younger, hotter, office assistant Jesse.  Kit takes to watching Danny Fit exercise videos to try and change himself.  The story looks at how you can miss what’s right in front of you while looking for that “perfect” person.
Puppy, Car, and Snow was a very sweet story.  It’s actually the third book in a series of short stories but you would be fine reading this as a standalone.  This story is about them spending Christmas with Ryan’s family.
Turkey in the Snow is another sweet story.  Hank has his four year old niece living with him due to her mother abandoning her.  He’s not much into flamboyant guys but when Justin, the daycare worker at his gym does a good deed for him, Hank changes his mind.  This was a bit insta-love but it was just right for a holiday story.
Going Up is told by Zach who is a lawyer who lives in the building’s penthouse.  He comes from a very well off and conservative family.  He is getting by but is overall not very happy with his life.  One day when the elevator breaks he meets Sean, who is his total opposite.  Sean makes Zach see life differently and then men falling for each other is another charming tale.
This bundle is Amy Lane at her sweetest.  If you’re looking for some holiday stories filled with sweetness and no angst these are a good choice.
This cover was done by Alexandria Corza and I think it is nicely done.  It’s visually attractive and catches the vibe of the stories. Cover Artist: Bundle Cover Art by Alexandria Corza. If I Must, Christmas with Danny Fit, Turkey in the Snow by Catt Ford. Puppy, Car, and Snow by Anne Cain. Going Up! by Aaron Anderson.
Sales Link:  Dreamspinner Press | Amazon
Book Details:Kindle Edition, 323 pages
Published December 25th 2017 by Dreamspinner Press
ASINB0781B8MJQ
Edition LanguageEnglish

Nearing the end of a suspended jail sentence should unlock a brighter future for CJ Davis, only the chip on his shoulder is as hard to shift as his bad reputation. Born into a family of career criminals who live down Davis Road, an address the cops have dubbed Davis Row, his name alone is like a rap sheet that makes optimism impossible.

Brand-new parole officer Noah Huxley is determined to see the good in men like CJ. After all, he knows firsthand that bad things can happen to good people. His colleagues mock his doe-eyed optimism, but Noah soon sees CJ’s bad attitude and bravado are weapons he uses to keep people at a distance.

Both men know one simple mistake can change a life forever. At first glance, they might seem to be polar opposites. Yet underneath, they’re not that different at all.

On Davis Row is another heartwarming, excellently written novel by N.R. Walker.  CJ Davis is born carrying a name that marks him as a criminal for the community that he lives in.  It doesn’t matter that he’s trying to escape all that name means or the people he comes from,  Just the  name itself brands him and beats him down.  He’s a Davis.  And  one small mistake costs him dearly and sends him off to prison where another would have gotten off.

Walker lets us into the heart and mind of  CJ the man who wanted hope and a future and found hell and a prison instead.  Now out he’s back working for the only man, outside of his Pops to offer him help and friendship, the man who runs the carshop where he worked growing up.  CJ is out but his situation is much the same. Until Noah Huxley comes into his life.

NR Walker’s stories are realistic and gritty as they can be hopeful and loving.  That’s a careful balance to maintain, especially with dealing with the subject matters here.  The author can’t gloss over the familial abuse, criminal family history, and prison past of CJ.  It haunts his every step.  Plus Noah’s work as a parole officer throws him up against the very prison system CJ just came out of and the man who sent him there.  You need to believe in the system and CJ’s family for CJ’s foundation to be real.   And it does.

But you also need the hope, the ability for a second chance for CJ to feel just as believable and NR Walker gives us that as well in the relationship that slowly builds up between Noah and CJ, despite all of CJ’s best defensive best efforts.

This is a marvelous story, just the type of NR Walker tale I love.  I just get so emotionally invested in these men and their HEA that when the end finally swoops in, it still manages to take me by surprise.  I’m overjoyed, sad to see another NR Walker story end, and start looking forward to another.

And yes, I highly recommend this one.