You can find their statement here:

Scattered Thoughts and Rogue Words will no longer be reading or reviewing any words by an author under that name.  We will also be removing old reviews as well. 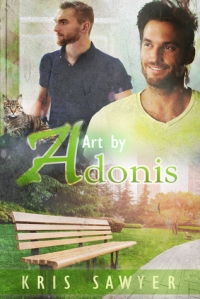 When a man takes an unexpected turn and ends up where he isn’t supposed to be, his fate will bring him back to his own path. But when it happens to two people at the same time, their fates will interlink and their paths ultimately entwine.

Aidan Ross, artist extraordinaire meets Rick Mahoney when the man comes for an interview, except he is at the wrong one. Aidan wants him to be the inspiration for his next paintings so badly that he makes a tempting offer. But soon he realizes that he has a decision to make. Aidan can’t be certain whether it’s only the artist in him who is allured by Rick’s charming looks or if there is more than that.

When an unexpected job proposal is made, Rick has his own concerns, the main one being the fact he is in a wheelchair. Why would a renowned artist like Adonis want to paint him? But he is in dire need of a job and he finds it hard to say no to a handsome man like Aidan Ross.

Art by Adonis is a journey of two men, imperfect in their own way yet so perfect for each other.

I thought Art by Adonis by Kris Sawyer was a sweet romance even if I wasn’t always in love with both of the main characters.  The idea behind the story was an interesting one, that of an artist and a  man who meet by mistake one day.  The artist is in need of a new muse for a upcoming show and the man is in need of a job.  Another fact?  The man is wheelchair bound due to a childhood disease yet the artist can only see his beauty which I loved.  So far so good.

Then the trouble sets in with the characterizations.  I don’t know if I  found them to be too shallow, or unrealistic, or I just had issues with the descriptions.  Rick Mahoney, the man in the wheelchair, “giggles” when he isn’t sad or being perfect.  Honestly, who giggles that much.  He started giggling like a kid from the outset and I found it off putting.   And this was the character I liked the best.

Than there was Aidan, the artist who signed his pictures Art by Adonis.  So true.  He actually behaves awfully towards his staff and Rick throughout the book.   Yes, he apologizes eventually but his behavior is atrocious as is that of some of his “friends” he surrounds himself with.  He and Rick quickly fall into insta love, some problems that are particularly current and should have been delicately handled are glossed over and a certain criminal elements pop up unexpectedly  (domestic violence, hate crimes, crimes in general) and then just disappears.  Plus don’t get me started on how a long-standing family divide was miraculously mended over just one dinner with one wave of the unreal narrative wand.

Yes, this story is best approached as a simple love story, no more.  If you like an instant love story with  a couple of unusual elements, Art by Adonis just might be the one for you.

Cover Artist: Sidney Lowell has put together a likeable cover. Pleasant to look at but not exactly my ideas of the characters.