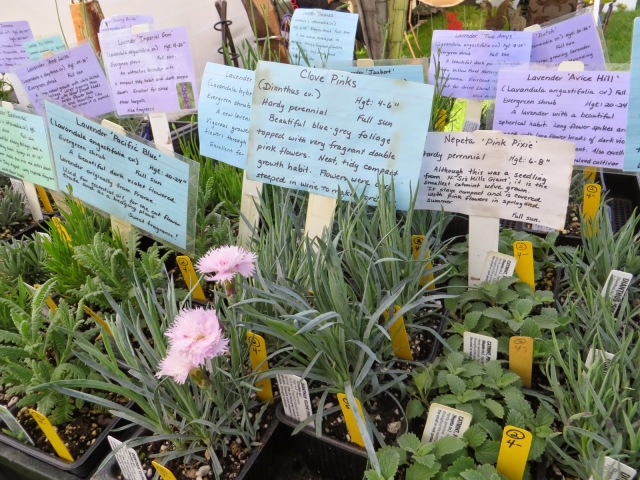 Feeling the Love of Spring

For the love of Spring a  column was temporarily postponed as the writer was lost amidst the crowds at the nurseries.  If found, please return her to Scattered Thoughts and Rogue  Words before the end of the day. At that time, the exhausted but happy  gardener will put out a revised Sunday post! Thank you.

Loneliness. The pain doesn’t simply go away with time. It’s been years, and they tell me I need to move on. But I can’t.

Blame and regret are my constant companions. Until I see him in the spotlight and everything changes. Night after night, I watch him dance. Thinking about him.

And now that I know, I want him even more.

The two of us.

Why can’t I forget him? His hands touching me. His mouth on mine. Kissing me. Rendering me mindless.

Every night I lay awake burning for him. Dreaming. Thinking. Needing him.

I want more. I am more. He’s seen that, and now here I stand with my dream on the horizon. All I need to do is take that first step. Trust him. 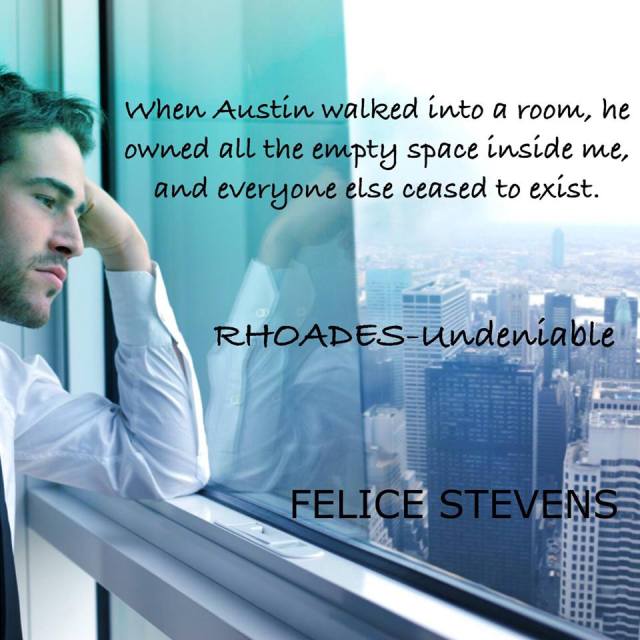 Fuck. I could kill Marcus. But I couldn’t refuse, and he knew it. Rhoades held me, but not too close, and after some initial hesitancy, I allowed myself to feel the music.

Rhoades’s breath touched my cheek, and I smelled the heat of the scotch he drank. It was like the night we kissed all over again, and I swayed, desire clawing at my insides. Why did being in close proximity to this man make me light-headed and restless?

“Fine,” I managed to speak. The club had taken on a sensuous glow, and the people beside us faded to black. All I could see was Rhoades.

“So you work in a dance studio? I should’ve guessed by your dancing at Man Up that you had formal training. You move beautifully.”

“I’ve worked there for a while. We teach kids four-to-nine years old. I love it.”

“And is that what you’d like to do? Teach dance? I know you can’t want to dance at Man Up for long.”

“All these questions.” I shifted nervously. I wasn’t about to reveal my dream to him. He’d no doubt find it foolish—maybe even as stupid as my father had. “I thought we were just going to dance.”

“Very well.” He said nothing more, and we danced, our bodies brushing. His effect on me was magnetic, his touch a force pulling me in close. I concentrated on his face: the small lines fanning out from his eyes, the dark brows like wings, his firm mouth. The taste of his lips lingered on my tongue, as bright and pure as if we were kissing now. I found it impossible to be near Rhoades and not crave his touch. Somehow I’d moved closer to him, and our cheeks touched.

“I wondered if I’d see you again after you didn’t show up this past week. I didn’t think you came to these types of clubs.”

“Do you think of me, then?” His hand slid up my back and splayed between my shoulder blades. I didn’t mind that possessive touch.…I wanted it.

“I think of you.” His whispered voice filled my ear with a roar. “After I left you last week, I stayed away like you asked, but I couldn’t sleep at night. Do you want to know why?”

I found myself nodding. We’d stopped dancing, though he continued to hold me, and we swayed together, caught up in our own world.

“I don’t know. Isn’t that crazy? You know I’ve watched you at James’s club. From the first, you caught me with your confidence—you owned the stage—but I also saw something yearning in you. That it wasn’t enough. You want more.”

His hands rested on my hips, and we stood chest-to-chest. The music played on, its sensuous beat rolling through me. I could smell desire in the air.

The tips of his fingers trailed over my cheek and jaw in a gesture so achingly intimate, I fought to keep standing. Finally he put his mouth on mine, and we kissed. No thrusting tongues and panting breaths. Only a gentle press of lips…and it shocked me that a man who radiated such strength could carry this tenderness inside him.

“Keep true to yourself. Follow your dreams. Only you can make them real.”

And with one last kiss, he walked away and disappeared into the crowd before I found time to take a breath. I thought about going after him but stopped myself. He was doing what I asked. Giving me the space I’d demanded. I had already told him I wouldn’t fuck him in a club, and he remembered and respected that. Another man might’ve tried to persuade me with drinks or force. Rhoades wasn’t the man I thought.

OTHER BOOKS IN THE SERIES

Felice Stevens has always been a romantic at heart. While life is tough, she believes there is a happy ending for everyone. She started reading traditional historical romances as a teenager, then life and law school got in the way. It wasn’t until she picked up a copy of Bertrice Small and became swept away to Queen Elizabeth’s court that her interest in romance novels was renewed.

But somewhere along the way, her reading shifted to stories of men falling in love. Once she picked up her first gay romance, she became so enamored of the character-driven stories and the overwhelming emotion there was no turning back.

Felice lives in New York City with her husband and two children. Her day begins with a lot of caffeine and ends with a glass or two of red wine. Although she practices law, she daydreams of a time when she can sit by a beach and write beautiful stories of men falling in love. Although there is bound to be some angst along the way, a Happily Ever After is always guaranteed.

Will he sacrifice his true mate for revenge?

An alpha of the Pine Creek Lake pack killed Devon’s father. But when Devon discovers his true mate amongst his enemies, will a forbidden love force Devon to choose between his pack and his heart?

Seeing the love of his life choose another, Zeke faces a bleak future as an omega with no hope of a mate. But when he stumbles into the arms of a strange and handsome alpha, is this a second chance for a happy ending? Or will he be cast aside…again?

Star-crossed mates must make the ultimate sacrifice to save each other.

Omega Sacrifice is a fast-paced, satisfying mpreg omega werewolf romance that will leave you hot and bothered with a happily ever after to melt your heart. 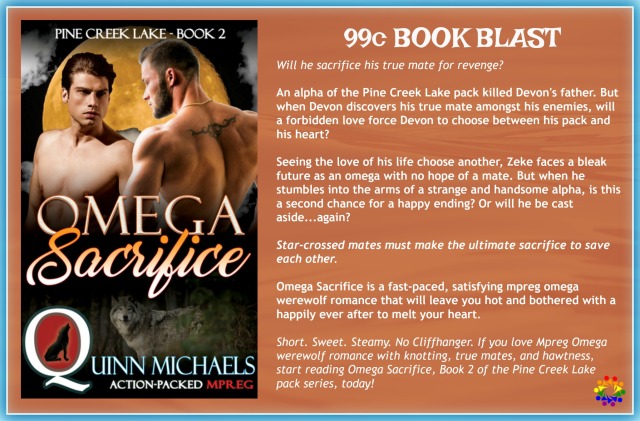 Devon froze. In his wolf sight, the omega male was a monochrome figure in gray, brown, and tan. He had a round face and light hair, escaping in scraggly curls that were tied at the nape of his neck in an elastic band. If Devon had been human, his mind might have drifted to poetry. The soft roundness of his figure was hinted at tantalizingly beneath a thin rain jacket and sodden yoga pants. His lips were full, his nose upturned endearingly at the tip.

The omega smelled like the sweetness of fresh kill, and Devon wanted to lick him. To taste him.

This was bad. A deep, instinctual part of him recognized that the omega in front of him was his true mate.

The omega froze in place. “Who’s there?” He wiped the sleeve of his jacket over his face and blinked. Squinting into the darkness. “Hello? Who’s there?”

Devon held his breath. This omega was his true mate, and instinct demanded that Devon make his claim. But he had a job to do. If he revealed himself, he would put his entire pack in danger.

The omega sniffed the air. Between the rain and his weaker human senses, he should not have been able to smell Devon. But he tensed, and Devon recognized both fear and curiosity as the omega turned toward him. “You’re an alpha. I don’t know you.” The growing panic was evident in his tone. He would shout for help soon. Devon was surprised he hadn’t shouted yet. Maybe there was some way to salvage this. Devon shifted, and then hands raised, he stood.

Cold rain streamed down his body. Though Devon knew he lacked the essential viciousness that made an alpha truly strong, none of that was reflected in his body. A surge of pride washed over him as the omega’s lips parted, and his eyes grew wide, and Devon smelled his desire.

“Ezekiel. Zeke. Your, um…” Zeke ran his tongue between his lips, and imagining that tongue in those lips on him made Devon’s cock swell.

Devon kicked himself. He should have stayed hidden. He should have killed Zeke before the omega had seen him. But Zeke was his true mate, and even if he hadn’t been, Devon didn’t have it in him to kill an innocent omega in cold blood. He wasn’t his father. He wasn’t his grandfather. Which meant Devon would have to take Zeke with him, at least until all of this was over.

Zeke was his true mate, and there was no way he was going to let the omega come to harm.

But first, he had to make Zeke comfortable enough to trust him.

“I have some clothes in this backpack,” Devon said, shrugging his shoulders. “Do you mind if—?”

“Yeah! You should do that!” Zeke swallowed. “Not that I mind looking at you. I mean, you’re really hot and—” He shook his head, and judging by the tint of embarrassment in his scent, Devon guessed that Zeke had flushed as well.

It was perfect. And terrifying.

Pennsylvania native, Quinn Michaels is a fan of fantasy, werewolves and M/M mpreg romance! She strives to write  action-packed adventures of romance, self-discovery and second chances, all served up with a hefty helping of sweet, sexy Omegas and hot, determined Alphas who will do anything to cherish, love, and protect their mates. She also enjoys the sexytimes!