Rating: 5 stars out of 5 (double for the recipe at the back of the story) 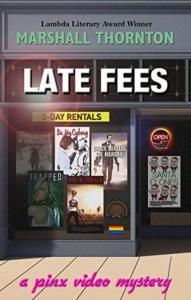 It’s Thanksgiving, 1992 and Noah Valentine is late picking his mother up from the airport. When he arrives he discovers that she’s made a friend on the flight whose also waiting for her son. When women’s son doesn’t show up, they eventually take the woman home for breakfast with neighbor’s Marc and Louis. Soon after, they learn that the woman’s son has overdosed—or has he?

Noah and his motley crew investigate over the holiday weekend; which includes a fabulous dinner, a chat with a male stripper, a tiny little burglary and some help from Detective Tall, Dark, and Delicious.

I can usually count on a Marshall Thornton story to be many things.  Always excellently written, beautifully researched if historic in nature, often heart wrenchingly poignant, gritty, and grounded authentically in whatever reality is going for current in that story. His characters are puzzle piece perfect for the story universes he creates. Realistic, believable, human and flawed.  His men have been sliced up by life, often by ex partners, and are in the process of re-assembling what’s left of themselves and their lives, if possible.  Through these men, we feel their pain, sadness, loss over dreams, rage, and even, a sense of irony at times.  Small flights of humor, a bit dry.

These stories and series (Boystown and Pinx Video) are incredible and in my opinion, must reads.  What I have never described one of those stories are is guffaw inducing or heartwarming or endearing. Nope, never thought those adjectives would find themselves into a Marshall Thornton review, especially one of his murder mystery novels.  Guess what?  All three apply here.

No one is more surprised than I am.

Late Fees (Pinx Video Mysteries, #3) by Marshall Thornton actually had me in tears of laughter at times!  All due to one character.  Angie Valentine, Noah’s mother.

Marshall Thornton has been awarded many literary prizes, and imo due many more.  But just for the creation of Angie Valentine, I would award him something special just for her alone!

She jumpstarts this story and Noah’s involvement in yet another murder mystery when she lands in LA on a visit to see her son.    On the plane she’s befriended (or the other way around) a woman, Joanne, also traveling to see her “gay son” Rod. They’ve hit it off swimmingly amidst drinks and perhaps some pharmaceuticals.  The memory Noah has of his mother Angie is not jiving with the woman he’s picking up late from the airport, along with Joanne. Lively, a little drunk or tipsy, this is a woman so full of life that strangers gravitate towards her. And she towards them.  Curious and outgoing…this woman is out for adventure!  But it’s her large heart that shepherds Joanne into Noah’s life and her’s.

Also into the lives of Noah’s neighbors downstairs, Marc and Louis, who are busy with decorating their space for the holidays and preparations for Thanksgiving for their small group of friends.  When Joanne’s son Rod is discovered dead, Angie invites her home with her and Noah…into Noah’s tiny condo.  Convinced that Rod wouldn’t take his own life, Angie, Noah, and the group is thrown back into a murder investigation with Angie finding out the truth about her son’s  past involvements for the first time.

Even as I write this I want to run back for my Kindle and start that story all over again.  The relationship between mother and son is tender, funny, complicated, and surprising.  With revelations on both sides,  it’s still Angie who keeps coming up with new layer after layer to herself that leaves Noah with his jaw on the floor while his friends just embrace the wonder that is this woman.  Trust me if I could have crawled into that novel, I would have too.    There is the scene in the leather bar The Hawk that is worth the price of this book alone!

As Noah, Angie, Marc, Louis and others investigate  the circumstances behind Rod’s death, Noah reaches out to Javier, Detective Javier O’Shea from previous mysteries.  That comes with it’s own problems and  emotional complexities for both men.  I love the dynamics that are being slowly played out between them, the tension and attraction never fades no matter the how long it’s been or the fact that Noah refuses to communicate truthfully with Javier.

Oh what a book!  Full of suspense, lots of twists and turns in the murder mystery but the heart of the story?  It’s in the relationships.  Between Rod and Joanne.  Angie and Noah.  Angie and well, everyone she comes into contact with and leaves better off.  And of course, Noah and his close family of friends at Thanksgiving.  It’s a cornucopia of emotions! We get a wealth of family of all types, love in every aspect, sadness, happiness, surprise, joy, and heartwarming sappiness too.  Did I forget to mention again the outright laughter?  Yes indeed, that as well.

There is another element, a huge one here in the series but as its not been disclosed in any of the blurbs I won’t do so in my reviews.  But I love the manner in which the author is dealing with it here, it’s just so well done.  Just as I would expect from Marshall Thornton.

I can’t let a review go by without mentioning some of the fun historically accurate elements folded effortlessly into this tale…a flyaway mention here and there.  Moonies in their yellow robes at the airport, Laserdisc players (shakes head), Sony Trinitron TVs, Sister Act on VHS (because someone didn’t have a Laserdisc player hooked up), the scandal of Sinead O’Connor on SNL…I hate to mention how many I actually remember.

I love this story, it’s my favorite so far in a series I love.  I will leave you with the words of a seemingly unflappable woman, who embraces it all, whether it’s everything a leather bar is showcasing or being questioned by an irate LAPD Homicide Detective.  Here’s an exchange between Noah and Angie at the end when she’s getting ready to leave for the airport:

“Mom, after this visit I don’t think I have any secrets left.”

“Well then I suggest that you get busy.“

That’s her and their relationship in a nutshell.  Perfection.  So is this book.

If you need more incentive, there’s the Thanksgiving menu that the group dines on in the back.  Yes, you need that too!  Along with the pumpkin pie recipe.  *Throws up arms* Hows many more stars can I give this book?

Cover art by Marshall Thornton. Love that cover.  Works for branding the series and this story specifically.