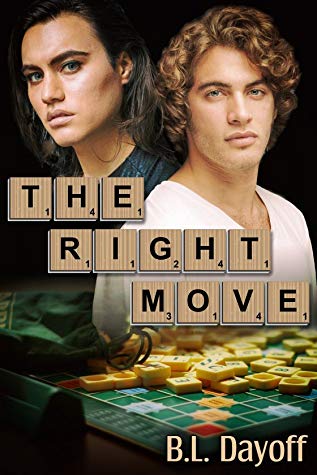 “Sorry!” Trevor jerked his hand back from the shoulder he’d grabbed for balance, which had the unfortunate side effect of throwing him off-balance and turning him ass over backwards. That would have been fine, except he was holding an open Scrabble box—tiles went flying (4,1,4,1,1,2). Thirteen points overhead.

This is the introduction to Chase (“the guy” in the above scene) and Trevor, and the opening of The Right Move. It was the first piece of this story that fell into place (I very much write A to B to C), and the visual was so strong that the rest of the story sprung from it as I wondered who these men are and what their accidental meeting means for them.

Scrabble is the first game mentioned in The Right Move, but it’s not the last, as Trevor invites Chase to join his board game club, which he admits is just an excuse to play board games and get the college to pay for them! Although Chase is initially resistant to making new friends his senior year in college, the club sounds too fun for him to resist. On his first night there, he plays Settlers of Catan with Mike, Sarah, and Annie, although the game has trouble keeping his attention, as you can see in the excerpt below:

Annie rolled her eyes, but said nothing, and the conversation slipped onto other topics and Chase’s gaze slid to Trevor. He was deeply involved in his game now, with all the pieces in their right place (Chase assumed), and fierce intensity on all of their faces. Chase wondered if they were even having fun. It looked more like work than anything.

Then someone at the table said something, and Trevor smiled. Fuck, it was beautiful. Vicious but not cruel, daring, perhaps, like some rogue pirate. Chase could imagine it: Trevor on the deck of a ship, rope in one hand, leaning off the side while the wind whipped through his hair. Of course, instead of short auburn curls they would be long, unruly locks.

“Well, look at that smirk.”

Chase twisted his gaze back to the table, where Sarah was watching him, a smirk of her own on her face.

“Um.” Heat built on the back of his neck and he tilted his head so his braid tumbled over his shoulder. His fingers immediately went for the frayed ends. “No?”

Sarah giggled and shared a glance with Annie. “Right.”

The other girl giggled as well and bumped her shoulder against Sarah’s. Chase ducked his head briefly and fought the blush spreading any farther. “Just seeing what’s happening at other tables.”

The girls giggled again. Mike, seemingly oblivious, asked, “We playing another round?”

Chase nodded, thankful for the out. “I’m up for it.”

The girls agreed, and they began to rebuild the board.

To see the boys geeking out about board games, fandom, and TV shows, check out The Right Move, available now at all major retailers!

The Right Move by B.L. Dayhoff

Trevor can never leave good enough alone. So when he meets model-gorgeous Chase who has an aversion to being touched, he spots a challenge. After all, no one wants to go through life not being touched by anyone, right? Despite a friend’s plea not to, Trevor sets his sight on fixing Chase.

After being forced to transfer his senior year of college, Chase just wants to avoid drama, pass his classes, get his degree, and move on (and back to his friends). He’s not looking for new friends, and his attitude gives him a reputation that makes it easy to accomplish. At least until he meets Trevor.

Despite an awkward beginning, common interests — and Trevor’s persistence — draw Chase and Trevor together. It’s almost inevitable that their friendship develops into something else. But when secrets come out, it might end the game early.

BL Dayhoff is working on coming out of her shell. She’s always had an interest in writing, but only recently has done it for more than just her own personal amusement. She loves to fill her time with too many things, and her initials really are “BL” but unfortunately do not stand for Boys Love. Although maybe her parents knew something about the future…

You can email her at BLDayhoff@gmail.com or find her online: