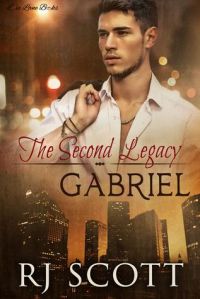 Author’s Note:
Be aware: emotional and physical abuse are depicted on the page in this book.

Be warned—this one is heavy—emotionally heavy—with topics of abuse, past and present, physical and emotional.  Gabriel is one very damaged man.

When Gabriel escaped from Hank Castille’s ranch years ago, he made his way to Dallas where he was “rescued” by a man named Stefan.  At first, Gabriel was so grateful to have someone who cared about him, he thought he was in love with the man. But Stefan set him straight on that—though Stefan cared about him, he also cared how Gabriel could benefit him and though Gabriel never seems to see the truth in the relationship, it’s evident to readers that Stefan is his pimp and is an emotional and physical abuser. But Stefan wraps his abuse in pretty words and gives Gabriel a place to stay, clothes, and a paycheck. It’s earning this paycheck that brings him into the Stafford Hotel where the owner, Cameron Stafford, needs an escort for a family event.

Cameron is blind, well, almost blind, but his eyesight is deteriorating rapidly and he’s fighting a power struggle with his hotel magnate father and his sister’s husband, both of whom want a part of the successful Dallas hotel.  Cameron owns it outright, however, thanks to the savvy of his deceased grandfather who made sure no one could absorb it back into the rest of the company.  Cameron is gay, single, and blind—three strikes against him per his father and brother-in-law. The single is because his last douchebag boyfriend took advantage of his blindness and stole from him, so he hires an escort to accompany him to his other sister’s engagement party.  To do this, he relies heavily on his bodyguard, known only as Six, and against Six’s judgment, he moves forward with his plan.

The story encompasses a year in their lives, a year in which the two men come to mean something to each other and Gabriel starts to see some of Stefan’s actions as less than humane. (Getting choked until one blacks out will do that to a person.)  The kindness he thought he felt from Stefan is tarnished by the reality, especially when he starts to pay attention to calls from one of the other young men who was abused at Hank Castille’s hands—a young man named Kyle who now manages the Legacy Ranch for Jack and Riley Campbell-Hayes.  The ranch is intended as a safe place for the men who were abused by Hank and others like him, and for horses who are rescued from abusive situations.  Each client of the ranch is assigned a horse and together the therapeutic environment serves as a positive in their recovery.  They have a place for Gabriel whenever he’s ready for it—no strings attached.

Gabriel almost waits too long to seek help, but when he does, it’s Cam and Six who help get him to the ranch, where over time, the much-needed healing begins to take place.

This is a love story, but it’s somewhat a secondary plotline.  The focus is more on the abusive situations, the reality faced by so many young men, the difficulty of asking for help, and the very real need for trust to begin to lay any foundation for a long-term commitment.

I am enjoying this series, and though this was a difficult story to read in places, it was very necessary to take each step along the way.  As the story ends, there’s been no quick fix, however, there is a very strong hope for the future for the two men others might consider damaged or disabled but they know are stronger than ever with each other.

I highly recommend this one, especially for readers who like hurt-comfort stories, but pay attention to the author’s warnings.  She’s very clear on the graphic scenes included, but my favorite sentence in the forward is where she very eloquently states: “I have a spectrum of readers and I know that some may consider this to be an on-page trigger, and it was important to me that I let you know.”

Cover art by Meredith Russell features a very handsome man set against the background of a big city skyline—both perfectly representing Gabriel and the city of Dallas.