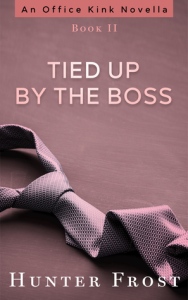 When Parker Greenhill speaks out against one of the execs to whom his marketing firm is pitching a project, he thinks he’s doing his ex a favor, but in reality, he’s hurting himself because his company loses the chance to work with that exec and Parker loses the respect of his bosses, teammates, and subordinates. Worse, he’s assigned to work with his curmudgeon of a boss, Morgan Brant, an older Brit who takes his role as VP seriously.

Somehow, though, working with Morgan flips a switch in Parker and he ends up on his knees submitting to his Sir after work every night. There may be ropes and bondage involved. And there may be a better use for Parker’s sassy mouth.

I enjoyed this story so much I couldn’t put it down. I simply had to read straight through to see what these men were up to and to learn how their awkward work situation would be resolved.

The author put plenty of kink into the story and built two characters who were at extremes of personality and yet gelled nicely together. And did I mention age gap? Well yes, there’s quite an age difference, so added to the bondage, the silver fox with the cute young exec just pushed all my buttons. Without giving away any spoilers, I can say that Morgan’s mum was a surprise to Parker and he was a pleasant surprise to her. There’s lots to love here and I’m most definitely looking forward to more in this series.

Highly recommend to lovers of light kink and bondage, age-gap, and slow burn.

Cover by James of GoOnWrite.com is a photo of a man’s tie set against a deep mauve background. It’s both attractive and pertinent to the story and is the same photo used in book one, but in a different shade.