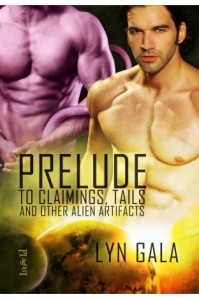 Before Liam had a new commander who openly distrusted him, before Ondry earned his ka status, there were two traders. Ye Ondry wants to earn status, and he is curious about this new human. Liam has just arrived on the planet and he’s trying to figure out these aliens who supposedly have good metals to trade. Neither of them suspects that a chance trade and a few pots knocked off a table could lead their lives and their fates to intertwine.

Note: This free story is a prequel to the story of Ondry and Liam that details how they met. As such, it’s not a romance.

Despite the note, I did find this very romantic and sweet. No sex, yes, but there is budding feelings and loving care enough to make me swoon. The book includes the following stories, some which have been published elsewhere (web) and some new. We get Liam’s POV, Ondry’s POV, and even one from a Grandmother’s POV. All of which give extra depth and dimension to the beginning of an already awesome story.

Even though this is a prequel, I think it’s best read after having read book one of the series at least… although it was just as good for me having read the complete series already. I absolutely adored the addition insights into Liam and Ondry’s. The first and longest story in the anthology is aptly titled “The Beginning,” and it shows us their initial meeting! This one shows Liam as he was when he first arrived on the planet and began to learn about Rownt and trading. I adored the way the trading worked, and the details of it we are given fascinated me to the point I wanted more. Plus the words Liam used to describe Ondry phyiscally the first time he met him were quite enlightening. I won’t say more on that, but if you are as curious about Ondry’s appearance as I am, I highly suggest you read this now.

The next story, “First Sight,” we get cover the same time period and, indeed, some of the same events, but this time from Ondry’s POV. I found this perfect. Even though the same things were going on, seeing them from the other side gave the scenes so much more depth and understanding. Reading these back to back also made it very clear the difference in these two’s thinking, and in Rownts and humans. Explanations of why Ondry reacted as he did to what Liam said and did in the first story, as well as the difference in language between what Liam thought he was saying in Rownt to the way Ondry actually heard it. And nuances of both Ondry’s action and the reactions of those around them of which Liam was only vaguely aware. I loved this so much.

Story three, “Slow Attractions,” shows an integral event from book one which was written all from Liam’s POV now in Ondry’s POV. Again, the amount of additional depth and understanding this gives is phenomenal, and I loved it. Despite the note on the blurb, I felt like in this one we do see romance… not sex or even a touch, but the caring that Ondry displays touched my heart big time. Oh to have someone take note of feelings and moods and to just care that much. Perfect and a must read for fans of book one.

The final short is from a Grandmother’s POV and is titled “Headstrong.” Again this goes over events from the first book but from a different POV that adds depth. The title itself refers to how the grandmother thinks of Ondry, and we learn early on that this particular Grandmother really is Ondry’s genetic grandmother and gain insight into Ondry though knowing something of his mother’s personality which he has obviously inherited. This is short, but yet it let me see how the Grandmothers think of both themselves, their duty, and how they see humans. Her wisdom and caring came across quite clearly. And the whole scene was so very touching that it had me in tears. No romance? I beg to differ with that statement.

If you’ve read any of this series before, I cannot recommend this free anthology more. It adds so much depth, and I adored each and every story. Five stars across the board.

I adore what we see on this cover… never all of Ondry, but the delicious peeks this time of that tail and his neck tie in wonderfully with the additional insights into him we get in the book.

Note:This free story is a prequel to the story of Ondry and Liam that details how they met. As such, it’s not a romance