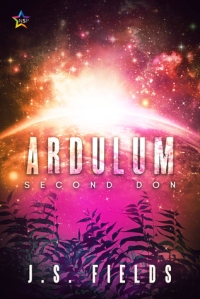 The Charted Systems are in pieces. Mercy’s Pledge is destroyed, and her captain dead. With no homes to return to, the remaining crew sets off on a journey to find the mythical planet of Ardulum—a planet where Emn might find her people, and Neek the answers she’s long sought. Finding the planet, however, brings a host of uncomfortable truths about Ardulum’s vision for the galaxy and Neek’s role in a religion that refuses to release her. Neek must balance her planet’s past and the unchecked power of the Ardulans with a budding relationship and a surprising revelation about her own genealogy.

Ardulum: Second Don blends space opera elements and hard science into a story about two women persistently bound to their past and a sentient planet determined to shape their future.

Ardulum: Second Don by J. S. Fields is the second book in the Ardulum-series of sci-fi novels. After reviewing the first one, I was curious to see how Neek’s and Emn’s journey would continue.

Just like with the first novel the worldbuilding is very impressive. There is a great variety of different alien species each with their own unique cultural and societal customs, technologies, appearances and ways of communication. Humans in general take a rather backseat role in this one with the plethora of other species able to shine, which I greatly appreciated. Though I’m usually not an avid reader of sci-fi, I could tell that the author put a great deal of work into constructing alien technologies and abilities that seemed plausible and followed clearly defined rules. I also enjoyed the use of gender-neutral pronouns in the case of species that were either officially gender-neutral or separated gender into three different categories.

From the start, I became a fan of Emn and how her character was developing throughout the story. I loved witnessing her maturing into a brave and determined young woman. However, I found that Neek’s character fell a bit short in comparison to Emn’s and was a bit of a step down from the first novel. She had just seemed somewhat more adamant before and at times her motives or line of reasoning would confuse me a bit. The same goes for Nicholas. I wished his own personal motives, troubles and opinions would have come through more. For the most part he felt like the nice guy who was coming along just for the heck of it.

I also had a bit of a problem with the way Neek’s and Emn’s relationship was unfolding. Though they were both clearly attracted to one another, Neek was rather hesitant about dealing with her feelings and openly acknowledging them in front of Emn for quite a while. She claimed that she did not know how to behave towards Emn because of her people worshipping Ardulans like Emn as gods. That just seemed a bit too out of character for me considering Neek’s attitude and behaviour from the first book. Now I don’t mind a slow build up towards a romantic relationship at all. However, I’m not a big fan of “delaying the inevitable”, so to speak, once it comes to the point where the mutual attraction between two characters is obvious not only to the readers but to the characters themselves. On the other hand, I did very much appreciate how open and direct Emn was from the start concerning her interest in Neek – it greatly added to her character for me.

Like in the previous entry, the point of view changes quite a bit between a handful of characters. I rather liked some of the new ones who got introduced like Arik.

All in all, I enjoyed the book though it didn’t capture my interest quite in the same way the first one did. I would definitely recommend this series to fans of sci-fi and space adventures since there is a lot of detailed worldbuilding to be appreciated. Readers looking for some hot, romantic action might want to look elsewhere though.

The cover by Natasha Snow is pretty to look at and the colours certainly pop. However, it strikes me as a bit generic and bland. I’d have preferred it if it featured a more direct connection to the story or art of a particular character instead. 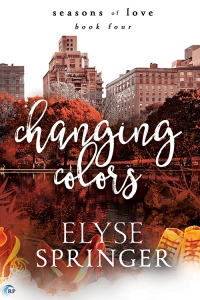 Tony Quinn has a knack for figuring people out. He likes labels, likes to be able to put everyone and everything in tidy boxes. As a theater director, it allows him to run a production without too much drama. But when he meets Gentry—“call me Gee”—in a bar one night, he discovers that some people aren’t so easily defined.

Gee Parnell is unlike anyone Tony has ever met before. He refuses to conform—to Tony’s expectations, or to society’s gender roles. He’s sexy and flirtatious, unapologetic and unashamed. And Tony isn’t sure he’s okay with that. So he breaks things off and escapes back into his well-ordered life.

But then an attack leaves Gee bloody and bruised, and Tony realizes that he isn’t ready to lose him. Not only is the passion between them off the charts, but Gee shows him a different way of understanding people. However, an exciting new job opportunity means that Tony has to decide between hiding his sexuality and his relationship with Gee, and his newfound appreciation for the color and beauty Gee brings to his life.

Changing Colors is the fourth book in Elyse Springer’s “Seasons of Love”-series, which I have been reading and reviewing quite eagerly. At this point I’m only missing the very first entry, “Whiteout”, but I’ll be sure to rectify that in the near future, since I have become a fan of this series.

While having read the previous books is definitely not necessary to get into the story of this one, it does add additional charm to it since characters and events from the other books will be mentioned or have little cameos here and there. As for me, the protagonists of this volume themselves have already been enough to catch my attention and draw me in.

Let’s start with Tony from whose point of view the story is told! He loves his job at the theatre, identifies as being bisexual and has a knack for getting a read on people. I really admired how he put honest effort into trying to accept and get used to Gee’s lifestyle. In the process of this Tony not only has to learn to accept who the man he loves is but who he himself is as well. On top of that he also has to deal with his father who keeps trying to push his son into joining the family company. I enjoyed how the author showed that even though Tony does his best to ignore his father and do his own thing, he still struggles with the preconceptions, fears and worries instilled into him during his childhood.

Gee was a really intriguing character right from the start. Though he identifies as a man, he does not conform with society’s gender roles and chooses to wear whatever he pleases including bright pink dresses and eyeliner. I found his take on life very inspirational. Just like Tony I respected him for his determination and courage in the face of all the judgement and even physical violence he has to endure from narrow-minded and downright cruel people. Still, it made it necessary for Gee to build up a lot of personal defences around himself, especially when it came to putting his trust in a romantic partner. It was very touching to see how he carefully opened up to Tony bit by bit.

Tony and Gee have to overcome a lot of hardships and inner demons to give their relationship a fighting chance. The way they interact with one another was really endearing and the author did a great job in portraying how much they mean to each other. And the sex scenes are nothing to scoff at either.

Another wonderful entry for this series that I highly recommend to pretty much anyone interested in romance novels! It features a wide cast of diverse characters who each have to overcome their own personal struggles in as well as outside of their love lives. I’m looking forward to seeing what else this author will come up with.

The cover design by Natasha Snow fits in neatly with the rest of the series but at the same time has some lovely details added to it like the shoes at the bottom. It was also a very nice touch to choose the river setting, a place where Tony likes to go and think. 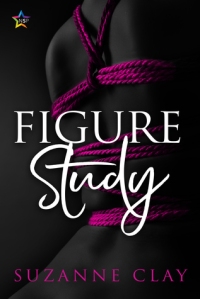 Ainsley and her former student Noma face the aftermath of their unexpected one-night stand in this second story of Chiaroscuro.

The night Ainsley spent gently dominating Noma was far more intimate than any scene she’d ever been in before. The intensity of playing with someone she’d taught and cared about was a completely different experience–and twice as intimidating. She’d had two options: turn Noma away and never see her again, or let her stay for a few hours more.

As they delve into new scenes, Ainsley and Noma confront past pain and baggage. Only by facing their fear of opening up can they learn to trust each other and share something deeper.

Figure Study by Suzanne Clay is the second part in the Chiaroscuro-series of short stories featuring painter and art teacher Ainsley and her former student Noma. After reviewing the first entry a while back, I was excited to come back to this. If you plan on reading this series, you should definitely start with previous story “Painting Class”.

The story picks up right where the previous one ended as Ainsley finds herself making breakfast after sharing an intense body painting session with a former student of hers. Since this is a short story the entirety of it takes place in Ainsley’s house over the course of half a day. The author threw in some nice details of Ainsley’s living space to get a better picture of her personal habits.

Noma also talks a bit about some negative experiences she had that shaped her initial expectations of dominance and submission. It is quite heart-warming to witness how she opens herself up and is truly touched by Ainsley’s care for her. Ainsley in turn is dealing with her own trepidations in returning to the position of domme after having been inactive for quite some time as well as the responsibilities (and pleasures) that come with it. I found the careful dance between those two as they try their best to make each other feel safe rather engrossing. All the while there is the underlying, unspoken question of whether there is any hope for this relationship to continue beyond this one encounter of passion. You very much get the feeling that both women want it to but are unsure on how the other person feels.

The continuation of this story certainly did not disappoint. This entry has definitely made the characters much more endearing to me to the point where I’m rooting for them and their blossoming relationship. I loved how the author told us so much about them within this brief period of time through their interactions and care for one another. I’ll be looking forward to reading and reviewing the next chapter of their story.

The cover art by Natasha Snow is very beautiful and spot-on just like last time. I love the way the rope just pops out but at the same harmonizes wonderfully with the colourless body and emphasizes its contours.