James Cape has been in love with his mother’s best friend Laurie since James was sixteen and Laurie an inaccessible twenty-six. When he’s turned down flat by the older man just after his nineteenth birthday, James’s best friend Al encourages him to forget Laurie and find someone else. And James tries, he really does. But can he cope with his feelings for Laurie, his best friend’s home-life problems, and the deteriorating health of his father, all at the same time? And will Laurie ever notice the young man who’s right in front of him?

Sorry guys, but this book didn’t work for me. **sad face**

Well, the premise was interesting and I was truly intrigued by the blurb. You see, I love age-gap romance, so I was up and even excited to read this title, however when I finish it I was really disappointed.

The novel was well written, simple language and fluid, but the plot and the story’s development felt lame and flat.

James had a crush on Laurie and when he was nineteen he assumed his feeling for the guy. I really liked it about James. He went for it at the time (way to go, James!). Unlucky for him, Laurie turned him down. Aaand, after that they almost never had an interaction in the story.

Years went by and I didn’t see a connection between them. Actually, James avoided Laurie like a plague for a while. And It would be fine if after that they started to develop some interaction so us, readers, would see them together and cheer for them at some point. It didn’t happen, though. The entire book they felt like strangers. They even didn’t talk or anything. Actually, Laurie almost didn’t appear in the story, so how I suppose to cheer for him and James as a couple when they had limited communication?

Actually, James had a huge interaction with Al, his best friend. They were close and loved each other and …[spoiler ALERT]

Anyway, there were few things that I liked in this book. The father problem was one of them. James’ father had multiple sclerosis and I liked how it was aborted, even though I felt really emotional about that.  [LITTLE SPOILER ALERT] I cried! Really ugly cry. Maybe was just me that cry for everything. But just in case, keep the tissues close by.

Well, My conclusion is: this story simply didn’t work for me. I couldn’t find a connection between the MC, and I felt the end was forced and abrupt.  There were ways to the author to change the plot a little and maybe this would be a nice story. But the author didn’t and I didn’t like… so…. that’s all, folks.

The cover art by Natasha Snow is okay and interesting. That was one of the things that intrigued and instigated me to read the story.

Cameron had it all. He was rich, lived in Manhattan, and even had a cross-dressing butler. But then he met Nate, an Australian who was bitter about love. Cameron was determined to turn this realistic into a dreamer by sharing his world of classy restaurants, Broadway shows, and fabulous parties. And while Nate’s friends saw the makings of a fantasy romance, it was Nate who had to learn that in order to open his heart, he had to face a painful secret.

Well, It wasn’t easy to start this review. Actually, when I finished the book I had mixed feelings. But after thinking about everything I’m pretty sure this book didn’t work for me as it could.
Although I liked the writing style, I didn’t like the rhythm of the story. It was so fast paced and the situation was rushed and unclear.
I also didn’t like Cameron. He was a total dreamer, spoiled and unrealistic. He fell in love with Nate after a week, and ok, I would buy it if I had seen their interaction. But the author skipped these parts. He just showed the first and the last day of them together in New work, and even that was short and rushed. How can the reader relate to a love so fast if the situations where they interact with each other was out of the book? Needless to say, I couldn’t buy them as a couple. Even when they were together I didn’t feel the connection between them. The story was told in Nate POV and in any moment it felt like he was in love with Cameron.
Although not loving Nate, I liked him. He was a lot more down to earth than Cameron and his interaction with his friends was great.

Almost in the end of the book, I realized the story wasn’t really about Nate and Cameron as a couple. This book was about Nate trying and moving on from his past. He had a secret and was stuck in the past and couldn’t break free. It made my eyes tear up when I learned his story. That realization was why my feelings were a little mixed about this novel and why I had, at first, problems rating this book.
But in general, the book just didn’t work. The plot had so much potential, could be a so great story but the development was lame. I think if the author at least hadn’t cut Cameron and Nate interaction and the story hadn’t been so fast paced, I could have enjoyed it.
Even though I didn’t like this book and wouldn’t read it again, I’m looking forward to the next one in the series. Just because I’m curious and want to know if the next will be less rushed.
The cover art by Natasha Snow is nice and suits the book. The image of a gray city can represent the way Nate couldn’t really enjoy New York city because of his past. And in front of it, Cameron as a powerful man and in color, who was supposed to help Nate to let the past behind. I like it.
Sales Links 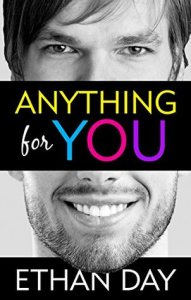 Jason Miller was still in the closet and didn’t see himself coming out anytime soon (or ever). He was accommodated with his situation and just the thought of what his parents, sister, and co-workers could say about his sexuality put him hiding everything he was from almost everybody.
He had never found a reason to kick the door open, walk into the light of day, and tell the world he was gay. At least that’s what he kept telling himself — along with a multitude of other solid arguments.
When Jason met Chad Wellington, an ex gay-rights activist/coming out guru, he was immediately attracted. Chad was the one thing Jason never saw coming and like a moth to a flame, these two opposites ignited.  Jason didn’t count with the feelings he started to have for Chad. He was in love for the first time. How could he give up on it? But Chad wouldn’t hide forever, so would he man up and coming out? Would he do it for Chad?
Well, guys, I started hating Jason in this book. He was a nonsense bitch guy. I didn’t pick up on the the real reason he was in the closet. I mean, his sister was an out and proud lesbian and his parents loved her anyway. So, what was his problem? He was a coward. And the worse was that he bitched at gay couples who were out, just because he wasn’t. Can you understand that? I know he was jealous, but it was irrational and even he knew it.
Thankfully after he met Chad he grew a little on me. He was yet a coward, but he was also funny and became nicer through the book.
I loved Chad and his power. He knew what he wanted and he wasn’t shy about it.
When they first met I didn’t buy their connection. I felt like it had happened too fast. But along the story, I started cheering for them and connecting with them. Plus seeing them fighting for their relationship was great.
The story was centered around the coming out question and how it can affect a relationship.  I liked how it was written: fluid and with humor. I loved the funny parts, and I literally laugh out loud reading it.
Well, the only thing I really didn’t like about this book was how fast paced it was. I mean, it could have been more elaborate and a little more lengthy. I just wanted more. Lol
This book was a light, funny, and quick reading. It didn’t wow me or anything, but I really enjoyed it.
Sales Links  Amazon
Book Details:
Kindle Edition
Published February 19th 2017 (first published March 13th 2011)
Original TitleAnything for You
ASINB06X1F3WM5
SeriesA Middleton Romance #1